January 16, 2017
It was April 1969. One hundred black students had taken over the student union on the campus of Cornell University in a protest for civil rights. The Associated Press reported that the students were angry at "the lack of Black studies programs and what they saw as the university's treatment of them as second-class citizens." They had even smuggled guns into the building and threatened violence.

Leading the protest was Thomas W. Jones. Jones declared in some of the most inflammatory rhetoric that Cornell University had only "hours to live." He said that he was willing to give his life for the cause and racist faculty and staff would be "dealt with."

Fortunately, the takeover, which lasted more than 30 hours ended peacefully. The one hundred black militants exited the building with Jones being the last to leave. He left the building carrying a rifle and raising a symbolic clinched fist.

But that's not the end of the story.

Cornell carefully considered the frustrations raised by the black students. Jones went on to earn a Master's degree from the university and helped organize its Black studies curriculum. He would later become president of a company with the world's largest pension fund. And in 1993 he was appointed to Cornell's board of trustees.

In May of 1995, Jones endowed Cornell University with a $5,000 reward for efforts on campus meant to foster "interracial understanding and harmony." It was then Jones made a grand gesture at reconciliation – he named the annual prize after Cornell's former president, James Perkins, the man who had been forced out of his position because of what had happened 26 years before.

Jones said that Perkins had engineered one of the earliest drives to enroll black students in college. "I simply feel the need to acknowledge that he was an extremely decent man who had the courage to do the right thing in trying to help America solve its racial problems by improving educational access for minorities," he said.

During the ceremony, Jones and Perkins sat next to each other.

It was March of 1995. Former Alabama Governor George Wallace – the man whom Dr. Martin Luther King, Jr. had referred to as a vicious racists – the man whose lips said King dripped with the words of "interposition" and "nullification" – the man whom Colman McCarthy of the Washington Post said was "both the symbol and enforcer of anti-black racism in the 1960s" – was visiting St. Jude's Church in Montgomery. Two hundred congregants were there to mark the 30th anniversary of the Selma-to-Montgomery march.

During that meeting, McCarthy said, "It was a reaching-out moment of reconciliation, of Wallace's asking for – and receiving forgiveness. In a statement read for him – he was too ill to speak – Wallace told those in the crowd who had marched 30 years ago: 'Much has transpired since those days. A great deal has been lost and a great deal gained, and here we are. My message to you today is, welcome to Montgomery. May your message be heard. May your lessons never be forgotten.'"

McCarthy added, "In gracious and spiritual words, Joseph Lowery, a leader in the original march and now the president of the Southern Christian Leadership Conference, thanked the former separatist 'for coming out of your sickness to meet us. You are a different George Wallace today. We both serve a God who can make the desert bloom. We ask God's blessing on you.'"

Sixteen years before this, Wallace made an unannounced visit on a Sunday morning to the Dexter Avenue Baptist Church where King previously pastored in the 1950s. Having suffered greatly from a gunshot wound inflicted by a would-be assassin in 1972 that permanently placed him in a wheelchair, Wallace was rolled up the aisle of the church to speak. He told the audience he had learned something about affliction he could never have learned before the attempt on his life. He said he thought he knew something now about the pain blacks had come to endure. "I know I contributed to that pain, and I can only ask for forgiveness," he said.

In numerous ways, Wallace sought to show repentance for his racism, making significant appointments of blacks to state government positions. McCarthy says that in his last race for governor, he won over ninety percent of the black vote. 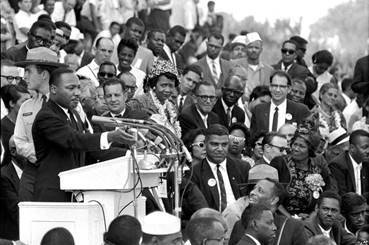 King gave his life for racial reconciliation. In his famous "I Have a Dream" speech, he articulated the vision on the steps of the Lincoln Memorial:

"I have a dream that one day this nation will rise up and live out the true meaning of its creed: 'We hold these truths to be self-evident, that all men are created equal'...

"I have a dream that my four little children will one day live in a nation where they will not be judged by the color of their skin but by the content of their character...

Marjorie L. Kimbrough, quoted in The Abingdon Preaching Annual 1996, queries if he could, King might ask us today, "What have you done in my absence? Did I die for nothing? Have you moved toward freedom and justice for all? Are you finally at peace or are you still fighting pointless wars?"

Most importantly, how may any of us who name Christ as Savior and Lord possibly draw any racial boundaries after the shedding of His blood for every tribe and tongue?

The Cross is the ultimate reconciliation: And it is a beautiful thing.