Rev. Mark H. Creech
Why we can't hear the truth?

January 28, 2017
The office of the Christian Action League, the organization I represent, is located in a building that houses several Christian counseling ministries.

Recently I noticed something outside the door of these counseling groups I had never seen before – little disc-shaped machines plugged into the wall that give out a constant white noise. It's my understanding these devices are ambient noise generators. The purpose of such machinery is to protect the privacy of the clients being counseled. If it gets too quiet in the building, it's possible at times to distinguish the voices in the counseling offices. The noise generators, however, will cover those voices.

That makes perfect sense. But here's a fact that adds another dynamic, those little machines don't necessarily need to be louder than the conversations inside, the constancy of the sound is such it fools the ear so that what's being said can't be distinguished.

This made me think. It seems to me that there is such constancy of sound today very few people can discern the truth. Figuratively speaking, the ambient noise generators of our day trick us with their sophistication, half-truths, false comparisons, revisionism, and many other distractions of contention. Only people who truly listen can distinguish truth from falsehood.

The Bible says, "Wherefore my beloved brethren, let every man be swift to hear..." (James 1:19). What is it that the writer of this text implies we should be swift to hear? It is instruction from the Scriptures – the Word of God.

Of course, many will scoff at such an assertion. Yet anyone who really knows anything about the Bible understands that it is unique in its continuity, circulation, translation, its survival from vicious attacks, its teachings, its influence on literature, culture, and the arts.

Apologists Josh McDowell expands upon these in his classic book, Evidence that Demands a Verdict. He concludes, "The evidence presented...clearly indicates that it [the Bible] is uniquely superior to any and all other books. A professor once remarked to me, 'If you are an intelligent person, you will read the one book that has drawn more attention than any other, if you are searching for the truth.' The Bible certainly qualifies as this one book."

Since the Bible stands alone among all other books, doesn't it seem imprudent to easily dismiss its words? Shouldn't we hear what it has to say?

Historian Philip Schaff once described the incomparable Jesus Christ in this manner:

"This Jesus of Nazareth, without money and arms, conquered more millions than Alexander, Caesar, Mohammed, and Napoleon; without science and learning, He shed more light on things human and divine than all the philosophers and scholars combined; without the eloquence of schools, He spoke such words of life as were never spoken before or since, and produced effects which lie beyond the reach of orator or poet; without writing a single line, He set more pens in motion, and furnished themes for more sermons, orations, discussions, learned volumes, works of art, and songs of praise than the whole army of great men of ancient and modern times."

With such credentials, doesn't it seem foolish to simply ignore Christ's message? Shouldn't we listen to Him and what the Scriptures say of Him?

No one who understands anything about history can deny the impact of the Bible and Christianity on Western civilization.

Norman L. Geisler and William E. Nix, in their book, Introduction to the Bible, contend:

"The influence of the Bible and its teaching in the Western world is clear for all who study history. And the influential role of the West in the course of world events is equally clear. Civilization has been influenced more by the Judeo-Christian Scriptures than by any other book or series of books in the world. Indeed, no great moral or religious work in the world exceeds the depth of morality in the principle of Christian love, and none has a more lofty spiritual concept than the biblical view of God. The Bible presents the highest ideals known to men, ideals that have molded civilization."

So why in recent years have we largely been ignoring this book? Why are we removing its influence from the public square? Why the neglect of it in our homes? Even many of our churches in accommodating popular culture have abandoned its fundamental teachings.

There was a time when we recognized the Bible for its unparalleled and divine character? We trusted it as a compass for determining absolute truth and our knowledge in every field of human endeavor was unmatched around the world. Are we now better without it? Hardly! Instead, the times are more confusing with exceedingly complex issues that we can't seem to solve. Most experts would agree that the West seems to be in a dangerous spin downward. 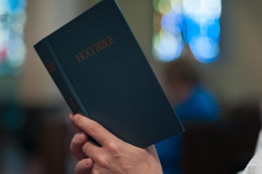 Nationally syndicated radio talk show host, Dennis Prager, has succinctly described the outcome in this way, arguing, "With the demise of the biblical religions that have provided the American people with their core values since their country's inception, we are reverting to the pagan worldview. Trees and animals are venerated, while man is simply one more animal in the ecosystem – and largely a hindrance, not an asset."

This is crazy and it's destroying us from within!

In a multicultural society as our own, granted, it becomes essential that we listen to each other. But it is inevitably fatal, both individually and corporately, to fail to listen to God. Man loses his soul. Society loses it light, and consequentially our lives and liberty.

There are a lot of ambient noise generators that would trick us from hearing God's voice.

God isn't silent. He's still speaking. We're just having trouble hearing him because we've neglected the one thing that makes it possible to cut through all the "white noise" of the day and discern the truth. We've rejected the Bible.