December 29, 2017
In the Gospel of Luke, Jesus told a parable about a son who took the inheritance bequeathed to him and wasted it on "riotous living" until he became destitute. When he realized the foolish way he had acted, he returned to his father in hopes of being received as a simple servant, but instead, the father restored him royally. Many call it the parable of the Prodigal Son.

Not long ago, I found a copy of an old devotional written in 1942 by the Episcopal Church based on the story of the Prodigal Son. Its heading read Inherited Capital.

The devotional shared a story about a man and his wife who said to a clergyman, "We both graduated from college, agnostics. We don't go to church. We have two children, seven and nine years of age. We have tried to teach them Christian ideals of right and wrong. Somehow, we have failed. And we have begun to realize that we cannot by ourselves and without belief in God, pass on to the children what we inherited from our church and our church-going homes. Will you give us some books to read that we may regain our faith?"

The devotional then went on to make the point: "The Prodigal Son had used up his material wealth: this couple their spiritual. Only a return to the Father could replenish it. Have we not been living on inherited capital in every phase of our life? This inherited capital may last through the second generation but not through the third. Christian standards of right and wrong lose their strength and dynamic without convictions of God and Christ. Let us return to our Father."

Interestingly, we are now coming to the end of three generations since that devotional was written. And it's abundantly clear that the inherited capital of our Christian culture has been extravagantly wasted and is now in tremendous depletion.

One of my favorite books is by the authors, the late Dr. D. James Kennedy and Jerry Newcombe, titled What if Jesus Had Never Been Born? The book irrefutably demonstrates the unprecedented impact for good that Christianity has had on the world, especially western society.

Here are a few highlights from the book:

Most of the world's greatest universities were started by Christians for Christian purposes. Literacy and education for the masses, capitalism and free enterprise, Representative government, the separation of political powers, civil liberties, modern science, the abolition of slavery, the elevation of the common man, the elevation of women, a higher sexual ethic that has protected the human race, a high regard for human life, higher standards of justice, the greatest works of art and music, and countless lives changed from liabilities to assets, have their roots firmly in the rich soil of the Christian religion.

"The religion of Jesus Christ has done more to elevate moral standards than any other force in history," wrote Kennedy and Newcombe. This same Christ who changes the soul has also changed the whole world for the better.

But the authors also noted the way that many in the West now reject Christ and the clear teachings of God's Word. "We have created a morals-free, values-free society, and now we are reaping the whirlwind. All of the scandals we've seen in America – in government...even in the Church – are simply the pimples on the surface that are arising from the moral corruption within," they wrote.

The late R.C. Sproul spoke of this same problem in a sermon titled The Parable of the Mustard Seed. Sproul said:

"You look at our own culture and it seems as if the church is in decline. You look at Western Europe and you read that in most of the countries in Western Europe the attendance in church on Sunday morning is about 2 percent. The great cathedrals have become, in the words of the skeptics, mausoleums of a God who is dead. And the historians say of our own nation, that now we live in the post-Christian era, where if Christianity is not dead, it is at least rendered irrelevant. The federal government of the United States has declared independence from God, interpreting the separation of church and state to mean the separation of the state and God. The things of God are banished from the public square, from the schools, from the halls of Congress, from the courts, unless or until there is a national catastrophe like 911, and then all of a sudden the churches are revisited for a little while until all the panic subsides." 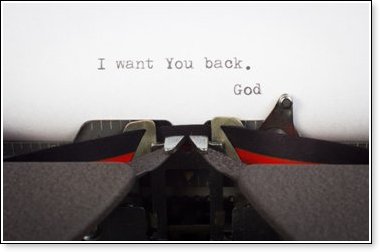 Yes, we've been living on inherited capital for a long time, but we've wasted and neglected what was passed down to us to the place that today we're spiritually destitute – spiritually bankrupt. If we don't change our direction, if we don't change our ways, the incredible good that we have enjoyed and sadly taken for granted won't be there anymore for our children.

Every New Year provides us with a new start – a new chapter to be written.

If we're sincere in our repentance, he will restore us royally.