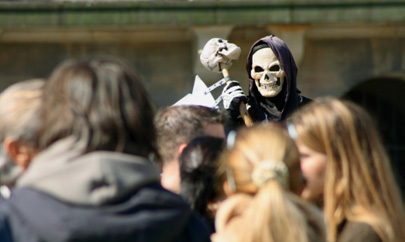 According to the Associated Press, Researchers at East Carolina University in Greenville, N.C. say the midlife white death rate in 40 of the state's counties is seeing an unprecedented increase.

When I first read this, I thought to myself, "What in the world?" But the lead author of the study, Dr. Chris Mansfield, attributed a large portion of the exacerbated mortality rate to "deaths of despair." That's a classification that applies to suicide, alcohol, and drug abuse issues. Mansfield added that the findings in the Tar Heel state reflect national trends.

In 2015, a couple of Princeton economists released a groundbreaking study that contended that the death rates among white middle-aged Americans had claimed nearly as many lives in the past 15 years as the spread of AIDS. The Guardian, which reported on the study, said: "Though not fully understood, the increased deaths are largely thought to be a result of more suicides and the misuse of drugs and alcohol, driven by easier access to powerful prescription painkillers, cheaper high-quality heroin, and greater financial stresses."

It's not always easy to pinpoint what's at the heart of people's despair but it's a sure thing when drugs and alcohol are in the mix, especially alcohol, the problems intensify. It's like throwing fuel on the fire.

Alcohol and suicide are like bosom buddies. One-third of all suicides in the United States involve alcohol. Adult alcoholics are 120 times more likely to commit suicide.

Quitalcohol.com says, "Because alcohol makes people act more impulsively, previous suicidal thoughts may evolve into action with the use of alcohol. Because alcohol inhibits the ability to reason, drunken people do not fully realize consequences...Regular alcohol abuse causes depression, which is the main factor in suicide. Shameful acts are performed while abusing alcohol and these acts may lead to suicidal feelings or actions...Drinking causes countless issues in people's lives, and may cause some to believe suicide to be the only answer."

This is not to mention many other alcohol-related health issues that can kill early in life, such as alcohol poisoning and chronic liver disease – just to mention a couple.

It was interesting to me to note that the ECU study said, "Considering specific causes of death for midlife whites in the state as a whole, the fitted rates for heart disease, diabetes, and lung cancer in 2013 were lower than in 2000, but rates for suicide and liver disease were higher. The fitted rate for suicide increased by 52.0% from 2000 to 2013. The increase in suicide deaths of midlife whites is projected to be 80.0% in 2020. Similarly, for liver disease, the fitted mortality rate of midlife whites increase by 38.8% from 2000–2013 and is estimated to be 59.7% higher in 2020."

Significant increases in suicide rates and liver disease? That smells of alcohol to me, and to most anyone else, I think, that's willing to be honest about it.

As someone who has been addressing alcohol policy in North Carolina since 1999, I can say with authority that North Carolina has done more in the last 18 years to repeal public health and safety restrictions on alcohol than any period since Prohibition. And voila, it appears the warnings that were easily dismissed and left unheeded not to do this are now exacting their toll in blood.

Moreover, while the state has also been increasing accessibility to alcohol, we have also inadvertently distracted citizens from the one thing that is truly the balm for their despair – worship!

Last year the North Carolina General Assembly passed and Governor Roy Cooper signed the "Brunch Bill," legislation that now allows establishments that sell alcohol to begin sales early on Sunday mornings, instead of waiting until noon when church services are over. Indiana and Georgia are currently considering similar proposals.

Proponents argue this shouldn't have a negative impact on church attendance. Still, reputable studies show that when a state repeals its Blue Laws, not only does this escalate alcohol-related problems, but religious attendance falls.

Worship is necessary to the recreation of the battered and broken spirit of humanity. We desperately need it because life often gets our goat.

Do you know the origin of that expression? Racehorse owners used to put a goat in the stall with sensitive, high strung horses. The presence of a docile goat would help quiet and relax the horse. Sometimes before a big race, an unprincipled owner would steal the goat out of a rival's stable. He knew that if he could "get his neighbor's goat" his horse wouldn't run the race well.

This is the day of jangled nerves and complicated personal problems. Life often gets our goat and we don't run the race of life well. But sound research demonstrates that regular church attendance results in people having stable family lives, fewer instances of divorce, fewer out of wedlock births, and less crime and addiction issues. Those who attend church regularly also have positive health benefits such as increased longevity, less killer diseases, and better chances for recovery from illness.

If you are wondering why the experts at ECU didn't see the same increase in mortality rates in midlife nonwhites as whites, their study did say for reasons unknown that there was no evidence of increases in heavy drinking among midlife nonwhites. Maybe that's because, generally speaking, nonwhites, more specifically blacks, attend church more often by higher margins than whites.

If your life is riddled with misfortune, you might want to ditch the booze or other drugs. You definitely ought not to take your own life. It may sound overly simplistic, but let me suggest going to church. Try a Christ-centered, Bible-believing fellowship for a while, with an open mind and heart. It might just save and extend your life.