Rev. Mark H. Creech
Christianity and Islam on the resurrection of Jesus

April 1, 2018
Ravi Zacharias said at a conference that he and his wife once had dinner with a leading television preacher. Sitting across the table, the preacher told Zacharias that he had just been talking with a Muslim scholar and was quite impressed with the similarities between Islam and Christianity.

Zacharias said the preacher's statement startled him and his wife, prompting the question from Zacharias, "Why would you say that?" The preacher said, "Well, the Muslim cleric talked much about the points of agreement we share," information with which the preacher was impressed. 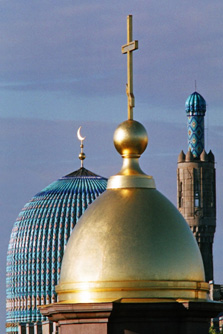 Clearly, the differences are profound and so is the hope they give.

Central to Christianity is the resurrection of Jesus Christ. And only the Christian faith claims an empty tomb for its founder.

Wilber M. Smith in Therefore Stand cites a Professor Childers who argues, "Mohammed died June 8, 632 A.D., at the age of 61 at Medina, where his tomb is annually visited by thousands of devout Mohammedans. All the millions and millions of Jews, Buddhists, and Mohammedans agree that their founders have never come up out of the dust of the earth in resurrection."

Indeed they haven't, and Islam possesses bizarre beliefs for explaining away the resurrection of Jesus Christ.

The Quranic account of the resurrection of Christ reads, "And for saying, 'We killed (the Messiah) Jesus, son of Mary,' the messenger of GOD. They never killed him, they never crucified him – they were made to think they did. All factions are full of doubt concerning this issue. They possess no knowledge; they only conjecture. For certain, they never killed him. Instead, God raised him to Him; GOD is Almighty, most wise." (Surah 4:157-8)

In other words, Islam says that Christ never actually died but was assumed into heaven. A couple of variations of this view exist.

One advocates Christ's soul departed from his body before he was flogged and crucified. So Jesus himself was assumed into heaven, while his soulless body was left on the earth to be tortured.

A more popular tradition in Islam argues that Judas, undetected by the disciples, made his way to Christ in prison and switched places with him, allowing Christ to escape. God then miraculously made Judas look and sound like Jesus to others about him. Thus, the executioners only thought they were crucifying Jesus when in reality he was hiding. Three days later Jesus appeared again passing himself off to his followers as having resurrected from the dead.

Such views demonstrate the astounding twists and turns – the ends to which the human mind will go to dismiss the truth. But the assertions of Islam to justify disbelief in the claims of the resurrection are relatively easy to disprove.

The Quran's account of Christ's resurrection is nearly 600 years removed from the event itself. The New Testament account, however, dates back to within only one to three years of the crucifixion, burial, and resurrection of Jesus. Given this kind of timeline, it becomes apparent the preponderance of the evidence would be with the account closest to the event, which is not the Quran. Neither does Mohammed have any authority to speak on the resurrection as a prophet in the manner God authenticated every true prophet before him.

What differentiates a true prophet from a false one? Miracles that attest to God and his benevolence are one of the ways. But the strongest evidence is simply this: If the prophet is truly from God, then his predictions – all of his prophecies must come true. Jesus showed both of these, especially via the resurrection.

Wilbur M. Smith, the preeminent scholar who wrote more than 60 books on various theological subjects, concluded: "If our Lord [Christ] said, frequently, with great definiteness and detail, that after he went up to Jerusalem he would be put to death, but on the third day he would rise again from the grave, and this prediction came to pass, then it has always seemed to me that everything else that our Lord ever said must also be true."

Indeed! The miracle of the resurrection proves every claim of Christ and sets him above every religious leader of the ages. The historical evidence for his resurrection is overwhelming.

This being said it's critical to know what Christ claimed concerning himself. He said he was the Son of God – that he was equal with God – that he was the Savior of the world – that he was greater than all the prophets – that by him every individual and every nation will be judged – that by him every person's eternal destiny will be determined – that no one who has ever sinned can escape God's wrath but through him – that he has the power to forgive every sin and freely grant eternal life to everyone who believes in him – that he holds the keys to life, death, and hell – that he alone can transform the human heart and satisfy every longing of the soul – that all authority and power resides with him – that he will return to this earth and reign at the right hand of God forever more.

Josh McDowell, another great Christian apologist, said that a student at the University of Uruguay once asked him: "Professor McDowell, why can't you refute Christianity?" McDowell answered: "For a very simple reason: I am not able to explain away an event in history – the resurrection of Jesus."

McDowell was right. You just can't explain it away.

No other religious claims are comparable to it. It's the heartbeat of Christianity and the hope of the world.