Rev. Mark H. Creech
Reflections on Memorial Day: The chasm in the middle of the Forum

May 27, 2018
The Forum in Rome was central to its civic life. It was surrounded by temples, legislative chambers, the marketplace, and other public accommodations. 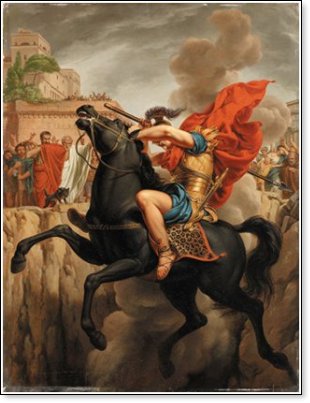 There is a legend that Rome was once shaken by a mighty earthquake that resulted in a remarkable chasm in the middle of the Forum. The empty space was so deep no one could see the bottom. Citizens brought mammoth stones and mounds of earth to fill it up. Still, no matter how much was thrown in, the crater was only worse than before.

The Senate consulted the oracles of the day, who counseled the void could never be filled until what was most valuable in Rome was cast into it.

"Heed this," said the augurs. "Your most sacred treasure must be dedicated to the gods if the City is to stand fast."

And so the people, horror-struck and aghast, rushed to the edge of the great pit and started casting into it their most prized possessions – fine jewels, silver, gold – but to no avail. The cavity was deeper than ever.

Perplexed and agonizing over what step to take next, a noble youth named Marcus Curtius rode forward, armed for battle.

All the people stood silent with their eyes fixed on Curtius. As Curtius gallantly surveyed the Forum and its surrounding landscape, he stretched forth his arms toward heaven. Then, with his sword raised in his hand, he spurred his horse and leapt into the enormous gulf.

At once the ground close behind him and neither he or his horse was ever seen again. Everything returned to normal – just as matters were before the earthquake.

War is the mighty chasm in the Forum of nearly every generation. When a nation and its justified interests are threatened by invaders, when its people are killed, when its property is destroyed, there is no choice but to resist – by any means and at any cost. There are some matters more important than life itself. To live underneath the tyrant's boot can be a form of living death.

One of America's best theologians was the late Dr. Lorraine Boettner. Many years ago, Boettner shared with me that much of America was under the spell of pacifism before World War II. In 1940 he felt the need to speak truth to this issue in a book he authored, The Christian Attitude Toward War. It turned out his book was strategic in helping prepare the country's leadership for the world conflict ahead.

In his book, Boettner argued, "Some time we hear it said that all war is wrong – wrong for the defenders as well as for the aggressors – and that even when waged with the sincere purpose of restraining evil, it tends to produce greater evils than those against which it is directed...We are under no illusions that it is a dreadful thing to be engaged in mortal combat with another human being or with another army. But under circumstances that sometimes occur, not only is such combat sanctioned by God, but it is our duty to perform it with all available resources. Conditions may arise in which it becomes our Christian duty to fight or wage war... it is nothing less than criminal to fail to provide our nation with an adequate defense."

Through the decades, more than 650,000 American airmen, soldiers, and sailors have given in battle what Abraham Lincoln referred to as that "last full measure of devotion."

Each of them was noble, most of them young, while all of them like Marcus Curtius leapt into war's hellish hole. Because of their sacrifice the ground closed in behind them. Because of them, life returned to the way things were before – our freedom, our property, and our prosperity preserved.

What could be more valuable to any people?

Jesus said, "Greater love hath no man than this, that a man lay down his life for his friends" (John 16:13).

Memorial Day isn't about barbeques, picnics, parades, political speeches or a day off from work. Instead, it's observed lest we forget. What an indictment to think we could ever forget. Yet we can and do.

Franklin Delano Roosevelt admonished, "Those who have long enjoyed such privileges as we enjoy forget in time that men have died to win them."

Someone once said, "Our flag does not fly because the wind moves it. It flies with the last breath of each soldier who died protecting it."

On Memorial Day we honor our war dead.

There is another Hero, however, whose mention is not simply an afterthought to these reflections, but the very source of soul and civil liberty. It is imperative to remember this righteous warrior! His name is Jesus Christ.

Christ leapt into that great conflict between good and evil like none before or after Him. By way of the Cross, the blood, the forgiveness of sins, and the sword of His mouth, that yawning abyss, the pit of eternal perdition, closed behind him. But unlike the Roman legend of Marcus Curtius, Christ actually resurrected – reappeared alive again – and now holds within His hands the keys of death and hell.

One day Christ will return to this earth. The Bible says in that hour "He shall judge among the nations, and shall rebuke many people: and they shall beat their swords into plowshares, and their spears into pruninghooks: nation shall not lift up sword against nation, neither shall they learn war any more" (Isaiah 2:4). In that day, His City, His Forum, shall be without end.

If we forget Jesus, if we neglect to repent of our sins and place our faith in Him and His atoning work, if we fail to surrender to His lordship now, then we shall surely be lost in the abyss forever.

The legend of Marcus Curtius for this editorial was drawn from "The Moral Compass" by William J. Bennett, Simon and Schuster, 1995.