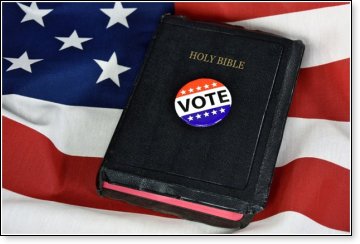 The late Milton Berle used to say as a part of his comedy routine:

"Since perestroika and glasnost, the Russians have changed their electoral system. A man went in to vote and was handed a sealed ballot. He started to tear it open. An election official said, 'What are you doing, Igor?" 'I'm opening the ballot. I want to see who I voted for,' said the man. The election official replied, 'Don't be foolish, you're not supposed to know. We vote secret ballot in this country.'"

Berle's humor reminds us of a privilege which we often take for granted – one that other countries were not afforded so freely – the right to vote for our leaders – the right to choose the direction of our nation. Citizen Christians should earnestly thank God for the freedom to vote, and they should show their gratefulness each opportunity they have to cast a ballot.

Voting might be viewed as a sacred civil sacrament. Without exercising it properly, the soul of the Republic may flounder and its vitality diminished. Just as participation in the Lord's Supper is meant to remind us of the price paid for our liberation from the power and penalty of sin, just as it helps strengthen us in the faith each time we partake of it, we vote because of the sacrifices made to give us our political freedoms, and each time we vote it does count and work to maintain and enhance the spirit of America.

So let us exercise this privilege on Tuesday, November 6th, Election Day, with the greatest of solemnity and sensitivity to our patriotic and spiritual duties to "Render unto Caesar the things that are Caesar's, and unto God the things that are God's" (Mt. 12:17).

In keeping with this command of Jesus, Citizen Christians should vote biblically. Voting biblically requires an unwavering belief in the sole authority of the Scriptures as an inerrant, infallible, and sufficient guide for human happiness and political prosperity. To doubt this belief or to compartmentalize it in a manner that accepts the Bible's direction in one area of life but not another, more specifically one's political convictions, is not a faithful exercise of Christ's command.

Wayne Grudem, in Politics: According to the Bible, explains how this religious understanding creates a stark choice for Citizen Christians today.

"There is a significant difference in the religious beliefs of Republicans and Democrats taken as a whole. Conservative evangelicals, who tend to believe that the Bible is God's Word in its entirety, have tended to align themselves with Republican principles. So have others whose religious views lead them to believe in absolute moral right and wrong, such as Roman Catholics, Mormons, and more traditional Jews.

"But people who have no religious belief at all, or who do not believe that we can know what God has told us with regard to moral standards, tend to be moral relativists, and this aligns them much more closely with the Democratic Party...

"The differences between Democrats and Republicans today have great significance. These differences are not accidental, but stem from differing convictions about several moral and theological issues."

Some may find the following statement striking. There is no support in the Holy Bible for abortion, euthanasia, practical atheism that denies state acknowledgements of God, infringements on religious liberties, redistribution of wealth, big government, high taxes, socialism, anti-law enforcement, global warming, reductions in national defense, open borders, LGBTQ, gambling, liberalization of liquor laws, and the legalization of drugs. These political positions typify Democrats, but are generally rejected by Republicans.

Granted, some leftist clergy claim there is support in the Bible for the political positions just mentioned. But a common characteristic of these preachers is that they have abandoned a high view of Scripture, or they have wrongly justified, dignified, and pacified the sins of our culture by twisting orthodox Christian teaching to their fancy. They are either like Lot sitting in the gates of Sodom or blind leaders of the blind. Some are false prophets who preach to "itching ears." (2 Tim. 4: 3)

Voting biblically requires scrutinizing and selecting candidates whose policy proposals would bring our state and nation closest to reflecting the moral mandates God declares in His Word.

No doubt some will argue my words are too partisan for a minister – too partisan for a religious organization. But I am first a proud member of the Puritanic Party. I am first and foremost a member of the Straight-Laced Religious Society, as are all who love God and His law, and this would preclude political support for politicians from a Party that shows hostility toward Him or His commandments.