Rev. Mark H. Creech
An upside-down nation is no joke 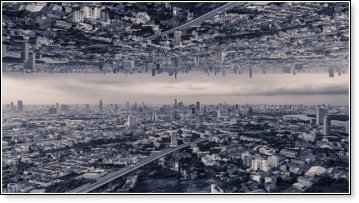 Most people can appreciate a practical joke. Some people are really good at setting them up.

During Hollywood's golden years, there was a fellow in the film industry who was probably the best that there has ever been at practical jokes. Writer and movie director Jack McDermott would go to great lengths to pull off a good one.

One of his favorite gags was to take his guests for a ride in his Model T. Ford into the mountains of California, where he would careen around curves at terrifying speeds. When his guests would protest for fear of their lives, he would yank the steering wheel from the column and throw it over the mountainside while still driving. The panic-stricken passengers were unaware McDermott had installed foot controls for steering.

McDermott also lived in a house with secret places, sliding panels, and specially designed rooms for his antics.

One featured room was hidden and upside down. The rugs and furniture were attached to the ceiling. The drapes and pictures, along with the fireplace, were upside down. Even the floor had a chandelier that extended straight up from its center. If a house guest had too much to drink at one of his wild house parties, McDermott would take the drunken individual to that upside down room and place him on the floor to sleep it off. You can imagine what it was like to wake up in there.

When we look around at our country today, many of us feel like we are waking up in an upside-down room. Seemingly everything has become topsy-turvy.

Here are a few recent happenings that I noticed which appear to demonstrate the point.

Some states dominated by the Democratic Party have joined the National Popular Vote Interstate Compact, which means these states intend to circumvent the Electoral College and award the results of a Presidential election to the popular vote. And in North Carolina, my home state, a Democratic judge knocked down the votes of 4 million people who were in favor of two state constitutional amendments, one which provided for a cap on state taxes and the other which required a photo ID for casting a ballot. Democrats in the state have been supporting the judge's terrible ruling. Why instead haven't Democrats at home and across the country, who believe every vote should count, decried the judge's decision?

This seems upside down to me.

The #MeToo movement vehemently speaks out against toxic masculinity, sexual harassment, and the sexual assault of women. However, the same movement is cravenly silent about a recent federal court ruling that says it's unconstitutional to require only men to register for the military draft. Where's the outrage by that same movement that women would now be coerced to do combat? Surely they don't think they'll only be fighting other women, and that if they were defeated in battle and captured it would never involve a sexual assault.

Hmmm....this turns the matter of women's rights on its head.

Speaking at a forum in Omaha, Nebraska, on Thursday of last week, former Vice President Joe Biden called Vice President Mike Pence "a decent guy." But when leaders in the LGBTQ community bitterly complained about Biden's assessment of Pence, Biden backpedaled and faulted Pence's position on gay rights, saying, "There is nothing decent about being anti-LGBTQ rights, and that includes the Vice President."

So does this mean former Vice President Biden considers the millions of Americans who still believe, as Pence does, that sexual practices outside of marriage between one man and one woman constitute immorality are indecent people? Either Biden believes that Pence, and everyone who holds to a traditional view of marriage is decent or indecent, which is it? He can't have it both ways.

Any way one looks at this, it's the wrong way up.

Last week, Republican Rep. Mark Meadows from North Carolina invited Lynne Patton, a Housing and Urban Development (HUD) official, who is black, to address the accusations Michael Cohen made during the House Oversight Committee that the president is a racist. Patton, born in Birmingham, Alabama, said she would never work for a man who was a racist.

Later in the hearing, Democratic Rep. Rashida Tlaib from Michigan said calling on a person of color like Patton to testify was nothing more than using her as a racist prop by Rep. Meadows.

Patton was puzzled by Tlaib's accusation, asking why anyone on the House Oversight Committee would place "more credence on the word of a self-confessed perjurer," and "criminally convicted white man," over "a highly-educated black woman, who rose up the ranks of one of the most recognized global real-estate companies in the world, spoke before 25 million people at the Republican National Convention, and now successfully oversees the largest HUD program office in the country?"

Good question! Anyone seeing it? It's a form of inverted racism.

I think Michael Medved well described this kind of topsy-turvy thinking when he said: "A quick glance at the American left reveals a movement in the midst of a nervous breakdown, displaying behavior that goes beyond inconsistency into the realm of bipolar moods and multiple personality disorders."

According to the apostle Paul in Romans 1:25, the defining moment for the incredible Roman Empire came when she "exchanged the truth of God for a lie."

Isn't this what America has done? Isn't this where our moral relativism has taken us? Paul adds, "And because they did not think it worthwhile to have God in their knowledge, God delivered them over to a worthless mind...." (v.28).

Nothing else better explains this upside-down nation in which we are now living. And that ain't no joke!