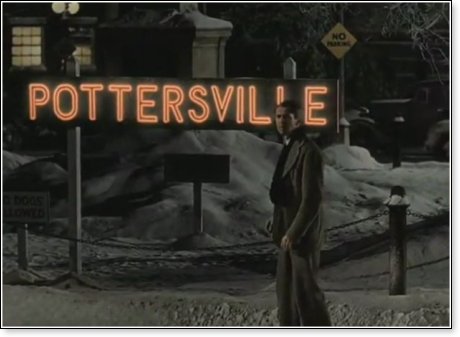 In one of the greatest movies ever made, Frank Capra's 1946, "It's a Wonderful Life," there is a scene where George Baily, played by Jimmy Stewart, is living an alternate life – a very negative one where things are much different because he wasn't present to influence matters for good.

The scene has Stewart entering into what was supposed to be the beautiful and wholesome town of Bedford Falls. Instead, it's Pottersville, a place where a very rich businessman, Henry Potter, played by Lionel Barrymore, for the love of money has brought about the corrupting influences of night clubs, bars, pool halls, burlesque, prostitution, and gambling.

See the scene from It's a Wonderful Life

Sadly, most of the things depicted in the Pottersville scene are looked upon quite favorably in many quarters today. Nevertheless, these ways are just as seedy and sinful as they were believed to be in the 40s. We've just dressed them up more nicely and provided them with an air of respectability.

When Governor Roy Cooper released his proposed budget for the state this week, he included with it a proposition for putting a bond worth $3.9 billion on the ballot in 2020 to invest in the state's education needs.

"Hmmm???" I thought to myself. "Whatever happened to all that money the schools were supposed to get from the 'Education Lottery?'"

The North Carolina Education Lottery's original legal obligation was to provide more than one out of its three dollars to education-related projects. It didn't take long for that commitment to be abandoned, and it is obviously a failed government policy.

The bill's sponsor argues that game nights have been going on in the state illegally for quite a while and that non-profits have come to depend upon them to support the best of causes. But an "end justifies the means" argument doesn't really hold up intellectually or consequentially. Perpetrators of some of the most heinous crimes practice that way of thinking.

Moreover, game night events, in my estimation, are like giving candy cigarettes to children. They glorify the menacing practice of gambling. They're just gambling on training wheels. And they will whet the appetite of our state's citizens for more of the real thing.

This week the North Carolina Family Policy Council released an Alert saying that they have obtained a draft copy of legislation to be introduced in the U.S. Senate "that could bring the largest gambling casino on the eastern seaboard to North Carolina west of Charlotte."

The proposal, which seems to be authored by South Carolina Senator Lindsey Graham (R), would "authorize the Catawba Indian Nation to own and operate a gaming facility on certain land in Cleveland County, North Carolina."

John Rustin, president of the NC Family Policy Council, was quoted in the Alert, saying, "It is unbelievable that a Senator from a neighboring state would attempt to thrust such an insidious harm upon the citizens of North Carolina, especially after years of attempts have failed to authorize Indian casino gambling in his own state."

This initiative, gaining federal approval to take land into trust on behalf of the Catawba Indian Tribe to build a 200,000 square foot gambling casino in North Carolina, along the I-85 corridor, has been attempted by Graham before. It was tried in 2014, and the NC Family Policy Council, the Christian Action League, and the Kings' Mountain Awareness Group teamed up successfully to beat back the measure.

But the core disposition of the gambling enterprise, which is greed, possesses such a profound yearning, that there are never enough times, never enough resources, and never enough tactics sufficient for suckering people out of their money. Once gambling has a foothold it grows and grows.

Casinos are already a part of the Eastern Band of Cherokee in Western North Carolina. In Eastern North Carolina, the Lumbee have made their attempts to get a casino along the I-95 corridor. And now there's the serious threat of the Catawba Indian Casino bill.

Oh! Did I also forget to mention SB 154 was filed this session in the NC Senate? It would authorize sports wagering on tribal lands. And then there's SB 165, filed only a few days ago, which would allow the state lottery commission to license off-track pari-mutuel horse race wagering?

The late Dr. D. James Kennedy once said that "gambling is institutionalized covetousness." Even when practiced within one's means, it violates the Tenth Commandment of God. It is, said Kennedy, "the Devil's delusion."

Inseparable from gambling is this insatiable desire to make a profit from our neighbor's inevitable loss and possible suffering. Gambling makes for a culture characterized by avarice, materialism, self-indulgence, and poor stewardship of one's possessions, not a society of generosity, brotherly love, justice, industry, mercy, and fiscal responsibility.

More gambling will only make North Carolina into Pottersville.