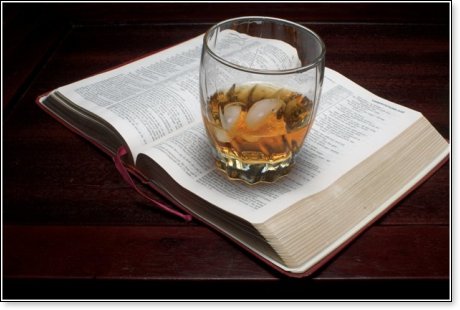 Having church in a bar is a new phenomenon, but a growing one. It's largely an informal movement started in recent years that has spawned hundreds of church services in dives and bars across the country.

In an article for The Wisdom Daily, Irwin Kula, says, "People have gathered for 'Beer and Hymns' in Portland, 'Church-in-a-Pub' in Fort Worth, 'What Would Jesus Brew' in Michigan, and the 'Bar Church' in D.C...

Kula urges his readers to note the welcome message from one group in Boston, which reads:

"Welcome to the Pub Church! We are a church in a pub, and the Spirit is with us. In this place, feel free to move about, help yourself to food and drink, and express yourself openly! We come together with a variety of thoughts, stories, talents, hopes, and hurts; all we bring is welcome. We pray that in coming together with all our differences and with the Spirit, we participate in a new divine reality. This is sacred space."

Supporters of this venue for worship argue it is an unconventional way of doing church, but it's also in response to the decline of institutional religion in favor of a new kind of church experience. It draws people who would never attend a traditional church and it's less judgmental, they say. It's devoid of religiosity and focuses on relationships. A bar is a place, they believe, that one would likely find Jesus if he were here today.

I cannot deny the Scriptures tell us that Jesus was found among sinners and associating with them in places commonly rejected. I cannot deny that some churches have been atrociously unwelcoming, self-righteous, pretentious, hypocritical, and even abusive. Nor can I deny that God's Spirit can do his work in the most unbecoming sites and situations. But for me, a partnership between a place that celebrates alcohol and the holy work of God is an unequal yoke that ultimately does more harm than good to both the sinner and the saint.

I think it's difficult to justify the complaint that the traditional church has been too offensive for one to attend, but then ignore the villainy of the bar.

One poet expressed it this way:

The Scriptures speak with the strongest of warnings about things that happen in a bar. "Wine is a mocker, strong drink a brawler; and whoever is led astray by it is not wise" (Proverbs 20:1). "Woe to him who gives his neighbor drink; pouring out from your wineskins to make him drunk so as to gaze upon his nakedness" (Habakkuk 2:15). These passages indicate the individual who drinks and the barkeeper who pours the alcohol share in personal and corporate responsibility for the resulting harms.

Alcohol continues its blight upon every phase of human life. Despite the fact we've dignified its use in the present and so many pastors and professing Christians seem averse to those so-called holy rollers, which challenge its use as something better left alone, alcohol's long trail of tears is undeniable. Day by day, science is supporting the contention that abstinence is the better way.

According to a recent study from the United Kingdom, a bottle of wine per week is like smoking ten cigarettes in the same period in terms of cancer risk. That's significant when you consider the average American who smokes consumes around 100 cigarettes a week. Whether a smoker or not, a bottle of wine every week increases the risk of cancer.

Studies are determining that even moderate drinking is an important public health issue. A major new study from the University of Oxford, Peking University, and the Chinese Academy of Medical Sciences reports that alcohol use increases the risk of stroke. "There are no protective effects of moderate alcohol intake against stroke," researchers determined. "Even moderate alcohol consumption increases the chances of having a stroke."

Medical News Today reported this month, "A new study goes against the grain of previous research by suggesting that alcohol-induced brain damage does not stop when alcohol use ends. Instead, the harmful effects of alcohol may continue during abstinence. The findings have important implications for the process of recovery from alcohol dependence." In other words, the negative impact of an alcohol disorder on the brain can continue after committing to a life of sobriety.

This is not to mention that excessive alcohol use leads to approximately 241 deaths every day and 2.5 million years of potential life lost each year in the United States from 2006-2010, shortening the lives of those who died by an average of 30 years. Excessive drinking was responsible for 1 in 10 deaths among working-age adults aged 20-64 years. And the economic costs of excessive alcohol consumption in 2010 (the latest figures available) were estimated at $249 billion.

Jesus said, "The thief does not come except to steal, and to kill, and to destroy. I have come that they may have life and that they may have it more abundantly" (John 10:10) The first part of Jesus' saying fits the many outcomes of alcohol use and abuse. It's a thief that can steal, kill, and destroy. But the mission of Christ is to give life and to give life more abundantly. The two purposes are diametrically opposed to each other.

Providing a Christian witness in a bar, I would say, is legitimate if the goal is to get people out of there. If its purpose is to get folks away from the bar so they can be instructed, encouraged, and held accountable for a holy life, that's a worthy objective. But to set up God's house in the devil's lair where people are continuously subjected to temptations that steal, kill and destroy life, is a misapplication of Christian missions.