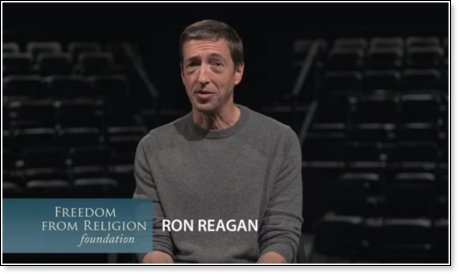 Did you see that ad, the one that ran during the commercial break of the last Democratic debate? It featured Ron Reagan, the son of former President Ronald Reagan, boldly promoting atheism and urging support for the Freedom from Religion Foundation (FFRF).

In the 31 second spot, Reagan says:

"Hi, I'm Ron Reagan, an unabashed atheist, and I'm alarmed by the intrusions of religion into our secular government. That's why I'm asking you to support the Freedom from Religion Foundation, the nation's largest and most effective association of atheists and agnostics working to keep state and church separate, just like our Founding Fathers intended. Please support the Freedom from Religion Foundation. Ron Reagan, lifelong atheist, not afraid of burning in hell."

The ad isn't new. It's been running for a few years now. Four years ago, I wrote about it in one of my editorials. But I think it's the placement, time, and significance of the ad which now speaks volumes.

Indeed, Rush is right! As a political force, the secularists – those folks that United States Attorney General William Barr recently said in his brilliant speech before the Notre Dame Law School are engaged in a campaign "to destroy the traditional moral order" and thereby have "brought with it immense suffering, wreckage, and
misery" – are characteristically members of the Democratic Party.

Is it hyperbole to say that the Democratic Party – not everyone who is a Democrat, but the Party itself – has become the focus of evil in America? The ad for the FFRF during the Democrats' debate seems to inadvertently reflect this unfortunate outcome.

The timing of the ad also seems important. While it's troublesome to see such an audacious display of unbelief, the ad is running hard at a time when atheism is actually in decline.

Several months ago, the Center for the Study of Global Christianity released a report with statistics showing the percentage of unevangelized people around the world is rapidly shrinking, and Christianity is growing faster than the population. Furthermore, there is a projected decrease in atheism worldwide. In 1970, there were an estimated 165 million atheists around the globe. Today, however, the number is down to 138 million, and, at the current rate, is expected to drop to 129 million by 2050.

Ron Reagan may smugly, condescendingly blow off the claims of the faith in the FFRF ad, but the church of Jesus Christ continues to take ground.

Falling behind on the world stage, perhaps organizations like FFRF feel the need to double down, lest the shared antipathy toward atheists and agnostics in previous generations rises again, and they are seen for the serious threat to good government they've always been.

Lastly, the significance of the ad is palpable.

Several years ago, I had a close friend who was an ardent atheist before his conversion to Christ. One day I said to him. "I can remember when you used to raise your fist toward heaven and dare God to strike you down if he existed. How could you do such a thing?" His response to me was profound. He replied, "It's the emptiest drum that sounds the loudest."

Unabashed atheism in the present day is the sound of an intense emptiness in our culture – a hunger for the absolutes of God, truth, a meaningful and well-governed life.

God is so very merciful, even to those who curse his name. It is our own sinfulness contrasted with God's goodness to us in spite of our sins, which should lead people to repent of unbelief and acknowledge him.

Lyman Beecher, a graduate of Yale University in 1797, a prominent theologian, educator, and reformer in the years before the American Civil War, eloquently warned:

"It is greatly to be desired that God should rule in the earth according to his pleasure because it is his pleasure to govern the world in mercy by Jesus Christ...Are any reluctant to be entirely in the hands of God? Are they afraid to trust him?... Let them surrender their mercies [the many blessings of God's sovereignty over their lives] then go out naked from that [providential] government which feeds, protects, and comforts them. Let them give up their Bibles, relinquish the means of grace and the hopes of glory, and descend and make their bed in hell, where long since [they] would have been if God had not governed the world according to his own good pleasure. If they would escape the evils which they fear from the hand of God, let them also abandon the blessings they receive from it. They will soon discover whether the absolute dominion of God and their dependence upon him be, in reality, a ground of murmuring and alarm...Our destruction could not be made more defined than it would be were we to be given up to our own disposal or to the disposal of any being but God. Would sinful mortals change their hearts? Could the combined universe, without God, change the depraved affections of men? Surely, then, we have cause for unceasing joy that we are in the hands of God, seeing he is a God of mercy, and actually is administering the government of the world in mercy, by Jesus Christ.

"We have nothing to fear from the entire dominion of God...[i]t is of the Lord's mercies that we are not consumed because his compassions fail not."

What an incredible statement by Beecher, one which essentially says that to reject belief in God and the Bible is to also discard the good which comes from faith.

Therefore, let the atheist and the agnostic demonstrate how his unbelief changes the most wretched of people from evil to good. Let them demonstrate the way skepticism, not Christianity, has had a profound positive influence on morality, law, the founding of America, science, literature, art, and a host of everyday things. Of course, any such attempt would be utterly bankrupt.

It is not the religion of Christ that should be feared! Instead, it is the depraved affections of humanity unchecked by God and the constructive influences of faith that should cause immense concerns.

Were it not for God's Word, his providential government of mercy in Jesus Christ, operating and overruling in the affairs of humankind, there would be no good at all, and the entire world would have already made its "bed in hell."

Jesus prayed to God, the Father, in the model prayer, "Thy will be done in earth as it is in heaven" (Matthew 6:10). Allow me to paraphrase this text:

"Since the Creator God is real, and since he is perfectly moral in all of his ways, then let us willfully and unconditionally submit to his governing, both individually and corporately. This is what is done in heaven. This is why it is called heaven. This is why the government of God is most desirable."

Believe it or not.