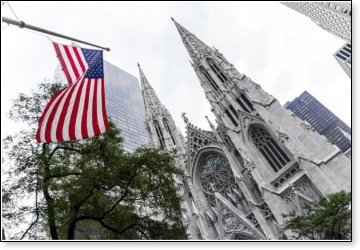 In May, Americans United (AU) for the Separation of Church and State highlighted a poll conducted by the Institute for Social Policy and Understanding in partnership with the Bridge Initiative at Georgetown University. They used the survey to argue that people on the Religious Right were a threat to America because they are the people most "eager to base U.S. law on their understanding of religion."

AU concluded, "The next time someone tries to scare you with stories of creeping sharia in your town, think twice. The Christian fundamentalist theocrats among us pose a much more serious threat."

If AU had anything other than a revisionist view of American history, they would know that if the Founders were living today, they would be counted among that seventeen percent who said they believe Judeo-Christian principles should be the primary source of law.

In his exceptional book, Our Sacred Honor, William J. Bennett, who served under the administrations of two Presidents, Ronald Reagan and George H.W. Bush, has rightly contended:

"America, in the eyes of many of our Founders, was a 'New Israel.' American exceptionalism – what made this country truly unique – was not its long history or established cultural traditions, for we had neither. What made this country different from all others was a prevalent belief that God played a direct and active hand in founding a people. Like the Jerusalem of old, America's 'New Jerusalem' was to become God's promised land to the oppressed – an example to all humankind. In short, without God's blessing, many of the Founders, especially Washington, believed that this country would never have come into being."

This conviction was so prominent in American life that, by the beginning of the 20th century, when President Woodrow Wilson said, "America was born a Christian nation for the purpose of exemplifying to the nations of the world the principles of righteousness found in the Word of God," nobody even winced.

Bennett also added and qualified that the Founders believed, "By worshipping and conducting ourselves in such ways that are pleasing to God, we would ensure that the American experiment would continue to thrive.... But if there was a 'Biblical fragrance' to America,...it was not to be a theocracy."

The Founders weren't theocrats, but they did believe that our laws were best drawn from the Christian religion. Christian evangelicals of the present are no different, and entirely in sync with the American tradition.

There may be a fringe element among Christian evangelicals today who believe America should become a theocracy. But most think the theocracy described in the Old Testament applied only to Israel and another dispensation. Most hold that the New Testament doesn't call for a theocratic form of government. Instead, the New Testament emphasizes principles and moral values that are relevant to all types of government. What Jesus, Paul, and the other apostles taught provided a tremendous amount of direction on morality and liberty. These Christian assertions are as relevant for totalitarian regimes as any democratic form of government.

Bruce L. Shelly, in The Gospel and the American Dream, beautifully states the case:

"The assumptions of the keep-religion-out-of-public-life people have deadly consequences. If selves are defined by their preferences, but those preferences are completely arbitrary, then each self constitutes its own moral and religious universe. There is no conclusive way to reconcile conflicting claims about what is good. In the absence of any transcendent standard of right and wrong, good and evil, the self and its feelings become our only moral guide.

"The naked public square will not remain naked. If the traditional Jewish Christian case for transcendent standards for American public life is rejected, something else will move into the sanitized space. Human beings are incurably religious, and their political life never remains neutral.

"While religion has often been linked with oppressive regimes, and our Founding Fathers had the good sense to guard against such a development in the United States, it is also true that non-religious regimes can be oppressive. Have we forgotten the meaning of Stalinism? What about the French Revolution? These are bloody examples of thoroughly secular governments' attempts to govern without regard for the religious needs of the people.

"When the state attempts to confine religion to the private sphere, it soon reveals totalitarian inclinations to oppress religion. And that is what we have seen in recent years in the United States. The church's rights to express itself, and to conduct its own affairs, have been insidiously eroded.

"Today, the state poses a much greater danger than the church of upsetting the constitutional balance between republican government and religious freedom, because people have come to equate the state with society itself. The answer lies with Christians who, even as a dedicated minority, will clearly affirm our democratic governance and bear witness to the transcendent purpose to which society is held accountable."

If what Shelly describes is the same as being a theocrat, then it's also what the Founders believed. If this is what it means to make America a theocracy, then generations of previous Americans were attempting to do the same. But it doesn't.

Christian evangelicals are realists. They are abundantly aware of the religious, cultural, and social pluralism of political life. They are willing to work with everyone. Nevertheless, they are also sufficiently aware that without a shared standard set of values that rises above self or the state and forms the basis for morality and freedom, the American experiment is destined to implode.

Robert Charles Winthrop, once the Speaker of the U.S. House of Representatives, summed it up quite well when he said:

"It may do for other countries, and other governments to talk about the state supporting religion. But here, under our free institutions, it is religion that must support the state."