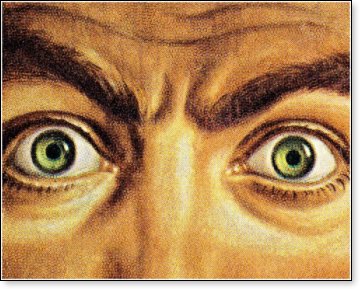 Do you ever think America has gone crazy – that too many now have bats in their belfry; that much of our leadership has lost its way with no true north to guide them? It’s not hyperbole to say that we’re living in a time when good is called evil and evil is called good. America has gone nuts, and yet so much of what’s accepted is treated as perfectly normal.

In his book The Gospel and the American Dream, Bruce L. Shelly recounts the interesting story of Peer Gynt, told by the Norwegian dramatist Henrik Ibsen. In Ibsen's play, Gynt goes to a mental hospital and finds that no one in the institution seems crazy. The people there talked quite normal, sensibly. They discussed their plans with such reason and precision; he felt confident that they must be sane. Gynt was mystified by the experience and asked the doctor about his discovery.

“They’re mad,” the doctor assured Gynt. “They talk very sensibly, I admit, but it is all about themselves. They are, in fact, most intelligently obsessed with self – morning, noon, and night. We can’t get away from self here. We lug it along with us, even through our dreams. O yes, young sir, we talk sensibly, but we’re mad right enough.”

Shelly uses the illustration to contend a similar societal madness is produced by decades of something he calls “the myth of ‘Escalating Emancipation.’”

This myth, he asserts, “claims that every step forward in the intellectual, social, and political fields is a part of a movement in universal liberation. Minorities are being liberated from political oppressors…women from servitude…children from the tyranny of parents, citizens from the constraints of poverty, homosexuals from the laws against perversion, couples from the lifelong prison of marriage….” etc. He adds that according to this myth, “The business of dismantling past restrictions must go on indefinitely.”

But this myth of “Escalating Emancipation,” which rejects conventional wisdom and urges us to throw off restraint and give way to insatiable appetites and impulses in the name of liberation, has just the opposite effect on its adherents. It isn’t liberating. And though its objectives might seem quite natural to so many, its end result is a culture of crackpots.

Jesus spoke of this principle when he said, “Enter through the narrow gate; for the gate is wide and the way is broad that leads to destruction, and there are many who enter through it” (Matt. 7:13).

In the Synoptic Gospels, there is the story of a man who was literally out of his mind. His insanity required that he be chained. However, his ailment was so terribly pervasive that even when such measures were taken, he would break away. Only after the man had a remarkable life-changing experience of meeting Christ does the Bible say he was seen “dressed and in his right mind” (Mk. 5:15).

Shelly adjures us to reject the myth of “Escalating Emancipation,” which leads to a form of mental and spiritual insanity – an irrationality which may seem quite ordinary, but actually shuts us away from the sane and “expansive world of the life of God.”

First, “biblical sanity recognizes a liberating world beyond this life…

"Secular thinking in America persistently treats this world as The Thing. The Christian, however, believes that human life and human history are in the hands of God. The whole universe is sustained by the Almighty’s power and love. The natural order is dependent upon that supernatural order; time is contained within eternity. This earthly life is a temporal place, a significant preparation for another, a final world beyond the grave.”

Second, “biblical sanity holds that human life is handicapped by a pervasive evil in society and every human heart…. Americans assume that human nature is basically good and that life can operate reasonably well without religious and moral judgments.” But according to the Christian moral order, the key sin in life “is egocentric pride, that perversion of human thinking and choosing by which the self becomes the center of the universe. The key virtue in the Christian moral system is obedience, that commitment of self in thought and act by which God is revered as the center of the universe. The Christian goal, then, is to make all of life’s activities and relationships a fit offering to God.”

Third, “biblical sanity attests to an objective standard of truth, the basis for a meaningful view of life and morality in the world.” Contemporary Americans are in the habit of “asserting the opinionated self as the only judge of truth…Christianity; however, recognizes divine revelation as the touchstone of truth.”

Finally, “biblical sanity highlights concern for other people. The Christian sense of the sacredness of human personality is grounded in the fact that God became a man [in Jesus Christ].” Therefore, “every human being, regardless of class or condition…is the center of God’s intentional love.”

Could there be a more sublime view of one’s fellowman? Hardly!

Who else but Christ, what else but the Bible, can actually “bring some semblance of sanity to the myth of Escalating Emancipations?” concludes Shelly.

Shelly made these arguments more than 30 years ago, but they remain steadfast and true. In fact, it’s been this way for thousands of years. The hope of any society gone crazy is still Jesus Christ.