Curtis Dahlgren
Academania vs. the little red schoolhouse I went to in the 40s

August 5, 2019
"The first thing I want to say is that you are NOT the most highly evolved generation in history. You are the first generation to be missing one-third of your classmates, because of abortion. And you are missing two-thirds of the classmates you started high school with because they aren't graduating." – C. Dahlgren, "The graduation speech you're not likely to hear this year" (5/27/05)

[NOTE: This is a copy of a letter to a local newspaper I just submitted.]

Sorry I missed the rural school reunion, but thanks for your coverage. I attended Duck Creek school for eight years, plus the six weeks of kindergarten we had, during which we learned how to read, with no Head Start or 4-year-old kindergarten! We started learning the vowel sounds on day one. All business. The cost per pupil per year in the 1950s was $300 or less (at $11,000 now, the results are "deplorable"). Today's public schools waste time on sex education and anger encouragement (over slavery) that could be spent on phonics. There were no disruptive students in the 40s when I started school, though I got in trouble with Mrs. Splittgerber before noon on day one. While she was attending to another class, I decided to go get a drink in the hall. I figured they hadn't actually told us we couldn't do that, so I'd just try it. I maybe got one sip of water before she grabbed me. Mrs. Splittgerber didn't mess around with "time outs."She didn't have any more trouble from me through third grade, after which she moved on to Hebron. By the way, she brought our water from home in her brand new Kaiser-Fraser. That car was another incentive for me to work and study hard, and just before my 16th birthday I bought my dream car, a 1953 Studebaker hardtop. Late in Mrs. Splittgerber's life, I did some tree work for her, and heard her call for me. She had fallen on the basement steps and I had to help her get up. The "generation gap" had gone 180 degrees, and now that I'm 77 it's going full circle.

A prominent politician asked once, "What was so good about the fifties?" We didn't have mass shootings for one thing. Every kid was given a pocket New Testament by the Bible society. Jefferson County got through the fifties without one homicide, I believe. Our schools didn't have to hire P.R. firms for radio ads bragging about "great schools." There is so little discipline and acdemic rigor today that Madison schools brought in the police for security. Now the school board doesn't want the police presence (they might "frighten" kids), so we can expect the car jackings and armed robberies to continue. As Hillary would say, "What happened?"

The university professors began belittling morality when I was in the Farm Short Course in 1960. I attended UW again part time in 1970-71 and it was even worse. There were three mass shootings this week and people can't figure out why people do that. We used to call that "deviltry." In the south it was called "devilment." That stuff is no joke, and I lost 8 friends in a shooting. We figure it was caused by a demon, which after inducing the shooter's suicide, goes out looking for another soul to steal. Literally. Our spiritual defenses are breaking down. There was only one mass shooting before Roe v. Wade, but since then the reverence for the sanctity of human life has gone out the window. It's not "cool." And maybe if the media didn't mention the killer's name, maybe we'd have fewer copy cats.

Modern schools are even pitching out Shakespeare and other classics of Western Civilization's literature and music (because they are "too white"). If we don't push back in favor of such things, they will be eliminated before too long in favor of the lowest common denominator ("don't have such high expectations of the kids," we're told). By the end of 8 grades, I could fill in the names of every county in the state on a blank map, but memorization has gone out of "style" along with penmanship and cursive writing.

I could have gotten a degree, but I couldn't stand the liberal professors. Some of my school mates may wonder what I've done with my education besides save trees. Well, I've written about 800 weekly columns for RenewAmerica and other web sites, and have two published books, plus UP magazine has published a few of my articles. So here's to the old one-roomed country school. 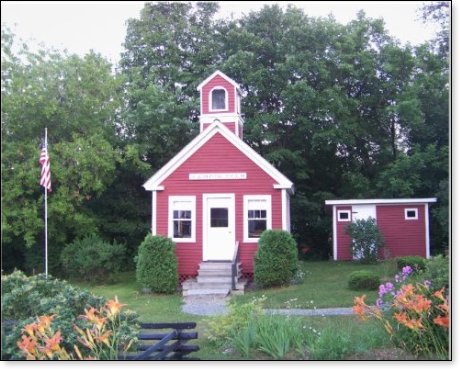