November 14, 2014
The best predictor of future voting patterns is past voting patterns, to use a twist on a famous maxim. This is probably even truer of groups than individuals, and, despite some wishful thinking to the contrary, this election cycle was no exception. As to this, Silvio Canto at American Thinker recently asked "What Happened to 'Demographics'?" in a piece in which he says that "people of color...don't automatically vote Democrat." Perhaps this means they manually vote Democrat, but, whatever the case, this person "of no color" is here to tell you three things:

They are voting Democrat.

They will continue voting for liberals.

This is also true of women and the young.

Let's now analyze the numbers. Please examine the chart below from Pew Research.

The black vote has been quite consistent through all three election cycles. The 2014 Hispanic vote did swing six points in the Republican direction from 2012, but the GOP actually did slightly better in 2010. Now let's examine the rest of the Democrat phalanx.

Below is a chart from a Pew Research article titled "As GOP celebrates win, no sign of narrowing gender, age gaps." 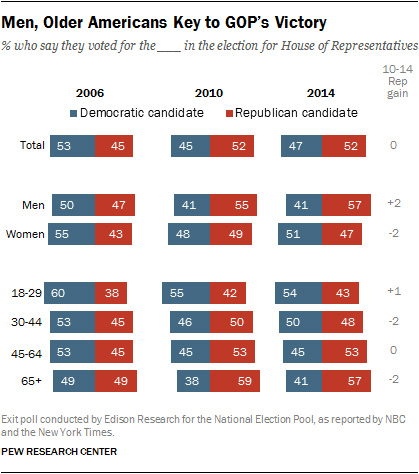 As you can see, Republicans actually did better among women in 2010 than this year, while the numbers among the youngest demographic remained virtually unchanged.

So what really accounted for this month's GOP wave election? For sure, the widespread sense that our country is declining and the unpopularity of Barack Obama caused that sliver of the electorate known as swing voters (a.k.a. confused), governed by emotion as much as anyone, to feel the Republicans were a better choice.

The rest was turnout. Being generally lower in midterm elections, which minimizes the idiot vote – and with Obama ennui further depressing Democrat-constituency turnout (which, uh, minimizes the idiot vote) – the electorate was older and whiter this time around. The age-group turnout reflected 2010. And relative to 2012, the share of the electorate represented by voters
In general, voters over 60 constituted 37 percent of the turnout; those under 30 just 12 percent.

I should also mention that, true to form, Republicans received approximately 90 percent of their votes from whites.

Some may now point out that the GOP did better among non-whites in certain places and races; an example is that Texas governor-elect Greg Abbott won 40 percent of the Hispanic vote. Yet it's also true that Democrat senatorial candidates in Oregon, Mississippi and Minnesota improved their standing among whites. These are outlier races, and focusing on them can prevent one from seeing the forest for the trees.

And the forest is this: 2014 did see the election of more GOP candidates who are younger, female and non-white. But same as usual, they were elected by those "old white guys."

The problem with much election analysis is that pundits are overly impressed with what invariably prove to be transitory swings toward one party or the other. But it's not how people vote that determines a civilization's destiny – it's what makes them vote how they vote that does. In 2008 and 2012, for instance, the problem was not that the majority of the electorate voted for Obama.

It was that they were the kind of people who could vote for an Obama.

Better leadership is only born of fundamental change in the electorate. And what is such a thing? When we hear a political conversion story – such as that concerning writer and editor Adam Bellow, the late Ron Silver or anyone we know with the brains to transition from being a liberal at 20 to a conservative at 30 – does the person say, "You know, I walked into that there voting booth and my hand, my hand...it...it, it was like an alien was controlling my body! It just pulled that GOP lever like it had a mind of its own. Now, 'scuse me, pal, I need to go renew my ACLU membership"? Nor does the person say, "I just woke up one day and realized how much more attractive the R is than the D. The D just looks sorta', you know, obese. This repulses my vegan self, and that's why I support Michelle Obama right down the line."

A real conversion is one of heart and mind. The person has had a flash of insight, an epiphany, and he actually changes at least some of his beliefs.

That's where the rubber hits the road. Civilizations rise and fall, prosper or perish, due to ideas that come to imbue people's emotional realm and then shape their words and actions. This means that to secure tomorrow, you must win their hearts and minds for Truth.

And what can we say about the Democrat constituencies in question here? It's not just that their voting habits haven't changed. It's that:
By the way, you don't have to write me saying indignantly that you're a woman, a young person or a minority and you don't embrace the above. I know you're out there. But just as individuals have characteristic qualities, so do groups. And my above characterizations are, lamentably, spot-on.

In other words, this election was not a repudiation of liberalism. It was a reaction to the status quo, which people tend to associate with the president.

Of course, the fantasy that this election means something more is understandable. People want to relish the victory, enjoy the champagne, without a party pooper raining on their parade. Republicans also see the demographic writing on the wall. With the Immigration and Nationality Act of 1965 ensuring that 85 percent of our immigrants hail from the Third World and Asia – and with even conservatives taking this importation of socialist-leaning peoples as a given – they, echoing the X-Files, say "I want to believe." So they enthusiastically say that Hispanics are natural-born conservatives.

Left unexplained is why these natural-born conservatives vote for socialist-oriented candidates in every Hispanic nation on Earth (the "conservatives" in such countries would occupy our political left).

We also hear about how Republicans just need to "reach out" to the black community.

Left unexplained is how this is going to work when, reflecting a wider phenomenon, a robustly conservative black man such as Tea Party stalwart Lloyd Marcus cannot even convince his own father to embrace the GOP.

It's also said, as Forbes contributor Sabrina Schaeffer put it, Republicans need "to rebuild a coalition of women who understand and value limited government." Since a group of such women already exists, we can assume she means a majority of them. However....

Left unexplained is how you can "rebuild" something that never existed. Women vote for big government all over the Western world. And as research scientist John Lott outlines here, statism's birth in the US directly coincides with women's suffrage, and the growth of both the female vote and big government perfectly correspond with each other. This is at least partially because, as explained here, women are the Security Sex.

We lastly hear that the young will come around when they graduate from college and find no jobs waiting.

Left unexplained is how this one hardship will change hearts marinated in leftism from birth via the schools, media and entertainment arena. Note that Lincoln pointed out, "The philosophy of the classroom today will be the philosophy of government tomorrow." Also note that people in Weimar Germany and Tsar Nicholas II's Russia had it far worse economically. They reacted by empowering Hitler and Lenin.

Speaking of demagogues, we can talk about "outreach," framing our message and finding appealing candidates all we want. But if women, non-whites and the young are still voting for de-facto socialists after six years of the train wreck that is our first lazy, low-info, anti-American, affirmative-action, crypto-fascist president, it should be clear that our problems extend far beyond the political.

November 29, 2022
The new voting system that gave Dems a GOP House seat is dangerous. Here’s why.