But Dillon's societal significance, his archetypal role, was that he stood for the rule of law. 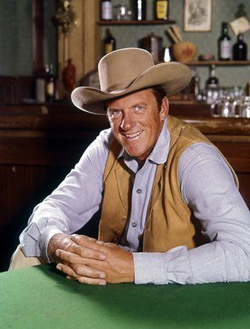 In a time of situational justice, craven feuds, and fast-burning gunslingers, Matt Dillon gave us the dramatic resolution we craved, about what was wrong, what was at stake, and what was going to be done about it.

The people around him knew this, friend and foe alike. In one episode, Festus beats a trail out of Dodge mistakenly believing he has killed a man. He knew that despite their friendship, Matt would come after him, bring him in.

The way Dillon was made, nobody was above the law.

The themes on Gunsmoke were mythic, the depictions brutal. Sons killed fathers, consumed by lust. Women backstabbed, connived, and men who were obsessed with them gunned each other down. Dillon often led fallen cowgirls to his stone and iron jail. Just as often the characters in our longest-running TV western redeemed themselves with strength and grace.

Many died senselessly on hardscrabble homesteads. The mode of capital punishment was hanging.

Doc brought another societal cornerstone to the dusty Kansas town: learning. He brought the faith that is joined to healing. Chester, last name Goode, the good man. He didn't wear a gun, but bet your bottom dollar he'd pick up a double-barreled shotgun to help Matt keep the peace. Festus too, a backwoods philosopher who found his place in the social order and never flinched when the bluffs went bad and the streets exploded in gunfire.

Kitty, her affinity for Matt undying, and immaculate. It was the thing the show's creators held back, the resolution they never gave us, the part of the story which burns with possibilities to this day.

With the death of James Arness, the last member of this great cast has left us, headed for the last roundup.

Somebody had to do it. Somebody had to go out in the middle of the street and draw against evil, and the jealous, prideful, greedy underbelly of the human condition. Marshal Dillon will forever be one of our favorite men who did that.

Portland, Oregon, journalist and writer Mark Ellis is a reporter for the traditional values monthly the Northwest Connection and is the author of the memoir Ladder Memory, Stories from the Painting Trade.