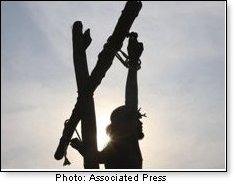 As the Easter holiday descends upon us, in all of its glory, we sometimes relegate the familiar narrative to that of a compelling folk story. But we do so at our own peril, because the Easter story is the most fascinating account of all time – bar none.

The historical accuracy of the Holy Bible itself, which archaeological discoveries continue to support, renders it useful as a history book in a classroom – and some schools use it for this express purpose. The Biblical references to the crucifixion and resurrection of Jesus Christ follow suit in that regard, with plenty of proof for both occurrences – including many reliable Christian-based and also secular historical writings.

And this is key, as without the resurrection, the entire Christian faith tumbles like a house of cards. In fact, the New Testament describes the resurrection as the actual center of theology

Celebrated on Easter Sunday, the resurrection signifies Christ's victory over sin, death and the devil. This translates to the promise of eternal life with God for those believers who have repented of their sins, and then accepted Jesus as the Son of God who died and rose again for their sins.

There are skeptics who would voice several arguments in terms of the accuracy of the resurrection. For example, some offer the theory that Jesus did not die on the Cross, but just lost consciousness. However, medical science destroys that premise, and this can easily be demonstrated by modern medical facts and research that prove that Jesus could not have survived the devastating physical assault of the crucifixion.

As to the issue of the tomb actually being found empty, historian Paul L. Maier concludes: "If all the evidence is weighed carefully and fairly, it is indeed justifiable, according to the canons of historical research, to conclude that the tomb in which Jesus was buried was actually empty on the morning of the first Easter. And no shred of evidence has yet been discovered in literary sources, epigraphy, or archaeology that would disprove this statement." We also know that the empty tomb was too notorious, too widely known as fact in and around Jerusalem following Jesus' death, to be denied.

Some cynics also question the Bible's assertion by Paul the apostle that Jesus appeared to 500 people, the majority of whom were still alive and could confirm what Paul had written after Christ's resurrection. Doubters try to explain away these sightings as mass hallucination. However, the science of psychology has proven that there is no such thing as mass delusion. Hallucinations are highly individual and not group projections. The hallucination theory is further discredited because after the ascension of Jesus into heaven, sightings of him completely stopped.

On the flip side of skepticism, one of the strongest arguments that provides evidence for the resurrection involves the disciples' reaction to the occurrence. The Bible tells us that despite Jesus' repeated predictions of his own death and resurrection, it seems that his disciples were not fully expecting what happened – they did not at first even believe the story that Jesus rose from the dead, nor did they grasp its significance.

Moreover, after the crucifixion, Jesus' apostles hid behind locked doors, terrified that they would be executed next – but something then happened that miraculously changed them from cowards into bold preachers. And that event was the resurrection of Jesus, who appeared to them after he had risen from the dead.

Despite extremely forceful attempts to persecute the disciples, as well as others who claimed that Jesus had risen, this group grew quicker than any other before or since. Soon the entire Roman Empire became a Christian state, and all without a sword being raised by the all-conquering new faith. This incredible growth is impossible to explain without the resurrection.

Yes, it is without a doubt that the resurrection transformed the lives of the disciples. So much so that all but the disciple John were martyred for their faith. Additionally, the apostle Paul became the most determined missionary of all after seeing the resurrected Christ. He endured five floggings, three beatings, three shipwrecks, a stoning, poverty, and years of ridicule – after which his life ended tragically at the hand of the evil Emperor Nero in Rome, who tortured and beheaded Paul in 67 AD.

Some relentless skeptics may still persist: "People sometimes die for a lie that they believe is the truth." True, but if Jesus did not rise, the disciples knew it – they were right there as eyewitnesses. Thus, they would have been dying for a lie that they knew with certainty was a lie. That would make no sense, as no one would die for a hoax.

In reality, these and other well-known theories of the skeptics are laughed at today by all serious scholars. There is no historical doubt whatsoever by these learned men of history that a man called Jesus lived, was crucified, and rose again 2,000 years ago.

Professor Thomas Arnold, headmaster of Rugby School for 14 years, author of the famous, "History of Rome," and chair of modern history at Oxford, knew well the importance of evidence in discerning historical facts. This great scholar said: "I have been used for many years to study the histories of other times, and to examine and weigh the evidence of those who have written about them, and I know of no one fact in the history of mankind which is proved by better and fuller evidence of every sort ... than the great sign which God hath given us that Christ died and rose again from the dead."

Absolute truth. And essentially the most important truth of all, as it has massive implications: Jesus' resurrection and victory over death ensures eternal life in God's Kingdom for all believers. As John 14:6 tells us, "I am the way, the truth, and the life. No one comes to the Father except through Me." Yes, we can be assured that the resurrection of Jesus of Nazareth is more than true history as we know it – it is, undeniably, Gospel.

Kari Lee Fournier is a member of Calvary Lutheran Church in Green Bay.

Kari Lee Fournier is a Christian conservative freelance writer. Recently retired after 38 years with her City Water Utility, Kari likes to say that she's still in the water business – although her work now involves the 'Living Water,' represented by the Holy Spirit, which is freely given by Jesus Christ to those who believe that He is their Savior who died and rose again for their sins. In her writings, she primarily attempts to relay the message of the Holy Bible in a simple way, so that those who read her work can immediately apply the Bible's teachings to their own personal life's journeys and trials. Kari's columns have appeared in the Faith Perspectives section of Gannett Company newspapers throughout northeastern Wisconsin.

May 5, 2021
Almighty God versus Satan: Nothing can stop what is coming!

April 4, 2021
Almighty God versus Satan: Be patient. It will happen

March 3, 2021
Almighty God versus Satan: The point of no return, its here