...and so the Sarah Palin for President campaign begins, but there are some issues which must be addressed right off.

Why does there appear to be so much animosity toward Sarah Palin?

Well, there's no denying that Sarah fought and defeated the powerful, corrupt, and deeply entrenched "old boy" establishment, bringing decency and benevolence into the state government. Who does she think she is?

...then Sarah Palin twisted the arms of the struggling oil companies, forcing them to pay thousands of dollars to each Alaskan family  how dare she rock the boat.

She ran a clean administration, and despite every sinister and desperate attempt, via contrived ethics charges by pathetic political wannabes, to create a false appearance of impropriety, Sarah's record remains clean. (All the more reason to be suspicious of her...)

She also gave birth to a down-syndrome baby. Realizing what an extra burden such a child would be, she could have so easily disposed of the problem, what with her political career and the rest of the family's needs to consider, it certainly would have been understandable, but this does highlight one of Sarah's major flaws  she has a true heart, not very PC.

Sarah lacks experience. This is true. She has no idea how to work those sleazy back-room deals for suitcases full of dirty money.

She will not be skilled at slipping those secret daggers in the backs of those who count on her to save the country. Not good at lying, she cannot be bribed, not selfish enough; even so naïve as to believe in goodness ... and ... God  oh no  no no, absolutely a big problem.

It must also be admitted, and there is no way round it, that her detractors on TV have indeed made some incontrovertible points. No matter what your thoughts on this campaign, you cannot deny the absolute facts they have established about Sarah Palin, and these are: 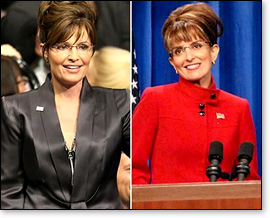 No matter how you dress up a lewd, vulgar, tasteless pig; even with a stunning red suit, a sharp hairdo, and attractive glasses  even if you put perfect lipstick on her  it will not be Sarah Palin  it will still just be Tina Fay, selling herself. There is no getting around this particular point of truth.

The honest, courageous, intelligent, noble, and able Sarah Palin remains unchangingly our Sarah, God's offering to America, perhaps our last chance for a true incorruptible leader, with angel fire in her eyes, and Divine lightning in her fists.

...and the pathetic dressed up pig remains, exactly and only what it is, lewd, vulgar, bought and sold, and as far removed from Sarah Palin, as the West is from the East.

So how do we begin this campaign  "Sarah Palin for President"?

The first thing to realize is that all of our problems originate from some form of corruption  we will not have that problem with Sarah.

There are plenty of righteous geniuses to hire for advice. All that is needed is someone who reveres and cherishes the real America, based on the Constitution, with the ultimate purpose of freedom, prosperity, and security, making the best choices after honestly considering such advice.

Next, being sure of what we want, we simply begin this "Sarah for President" campaign.

We know that money is necessary, so, as a show of faith and solid intention, take ten or twenty dollars  today  and stash it away for the "Money Bomb" moment which is on its way. On that Money Bomb day  faithfully pull that bill out and send it in! By placing that money aside now  we have begun our campaign.

Next, begin to spread the word. The Sarah Palin Campaign for President has begun. Set aside your donations, spread the word, form local groups ready to work for her in the near future, defend her good name at every turn, shun the likes of David Litterman, his sponsors, and the network which collaborate with the verbal rape of young women (Sarah's daughters).

Start making signs, get your bumper sticker, start raising potential donors, start working as if the election were in three months, and don't let up.

There is talk that Sarah will run on a third party  what shall it be called  why of course  THE TEA PARTY.

Work, talk, donate time money and materials. Realize what is actually at stake and fight. Fight as if freedom itself depended on it.

Most of all, become a prayer warrior, and beg God for the future of America.

Re-ignite your angry voice of moral outrage, and stop talking about "Taking Back Your Country."

Talk about "Keeping Your Country," it is already yours. Saying you "want it back" is a subtle admission of surrender  that you have lost, that your country has been taken. We do not want to "Take America Back," we, and Sarah, intend to keep our Country  it is already ours, and it will remain ours.

Every desk, every computer, every building, vehicle, government plane, desk, chair, the pens they write with and the paper they write on, all are the property of the people of these United States. The government owns nothing. It produces nothing, and has no claim whatsoever to anything. It rules only with our permission, and derives all that it uses from the labors and donations of the American people. All else is illegal, all else it treason against the people who fund and build everything in and of this nation.

Sarah Palin knows this, that is why she is our President-to-be, and that is why we the people who still have eyes to see and ears to hear, do now, with a great passion for freedom, and with unbounded faith, gratitude and reverence for the original Constitution of the United States of America  we the people do hereby declare the beginning of the unstoppable, victorious, and blessed by God...