August 23, 2012
Even before formally receiving the Republican presidential nomination, Mitt Romney began his purge of conservatives from the party by trying to engineer the ouster of Todd Akin as the Republican Senate nominee in Missouri. This is in character with someone who said he didn't want to be associated with the tens of thousands of conservatives supporting Chick-fil-A and its CEO's opposition to gay marriage.

Romney is the father of gay marriage and socialized medicine in Massachusetts but is on the verge, barring a miracle from the "Dump Romney" movement, of becoming the Republican "opposition" to Marxist Barack Obama in the fall.

There are many bizarre aspects to the orchestrated Republican panic which set in as a result of Akin's comments. One of the most blatant is that while Akin was urged to withdraw from a Senate race because of some potentially confusing comments he made about abortion and rape, Bill Clinton will be a prominent speaker at the 2012 Democratic National Convention and no one is uttering a word of protest. Clinton is the serial sex harasser and accused rapist who had sex with a young former White House intern when he was president. 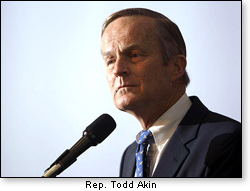 This is not a scandal. Indeed, Clinton is featured in one of Romney's campaign commercials as a reasonable Democrat on the subject of welfare and work.

The Akin controversy had the benefit of distracting attention from the subject of Romney's tax returns and his off-shore accounts. Romney, who says he is releasing only two years' worth of tax returns, paid a very low rate of federal taxation at around 13 percent during those missing years. He made this admission after Harry Reid accused him of paying no taxes at all.

Speaking of stupid comments, Romney's talk of his 13 percent rate, when he was supposed to be talking about Medicare, was widely viewed as playing into the hands of the Democrats. Perhaps he should have stepped down from his role as presumptive Republican presidential nominee.

The reason for Romney's tax secrecy may be, as Steve Baldwin of the "Dump Romney" movement and Michael Marcavage of Repent America confirm, Romney had Bain Capital investments in the abortion industry through a firm called Stericycle, which disposes of aborted baby parts. Since Romney wants the votes of conservatives this fall, it seems logical that he would want to conceal money from the abortion industry from public view.

Marcavage, who also serves as National Director of the Stop Stericycle campaign, confirmed to me in a telephone interview that Romney invested in Stericycle and that he must answer for this. The investment has been the subject of stories by the Huffington Post, Mother Jones magazine, National Review, and others. It is a story that won't go away.

Todd Akin's point all along was to affirm the dignity and value of every human life, no matter how it is conceived. A Christian family man with six children, Akin has been recognized by the American Conservative Union as a "Defender of Liberty" for his staunch conservative philosophy and voting record.

Akin's solid record was lost as Romney, other Republicans, and most conservative commentators decided that Akin should get out of the race. It was a panic.

It was also a trap from the get-go, orchestrated by David Brock's pro-Obama American Bridge SuperPAC. This is the group that recorded Akin's comments about "legitimate rape" and transformed them into a "shocking" scandal. The group specializes in taking comments by conservatives out of context and distorting them. Brock, a former conservative turned homosexual activist, also runs the Soros-funded Media Matters organization.

The Republicans fell into the trap almost willingly. This permitted the media to take the matter to another ridiculous extreme, in trying to associate Romney and his running mate Paul Ryan with Akin, as if all Republicans were somehow tainted by a media-generated controversy. Liberals were laughing with delight at the Republican predicament.

Carol Tobias, president of the National Right to Life Committee (NRLC), pointed out, "The mainstream news media is once again demonstrating its eagerness to use any excuse to portray a Republican presidential ticket as out of the mainstream on abortion, while ignoring the truly extreme positions taken by the pro-abortion candidate — this year, President Obama." 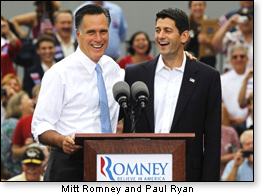 Tobias explained how this attitude guides the media as most reporters fail to even ask about Obama's support for abortion on demand for any reason, even for sex selection. Obama's disregard for the basic God-given right to life of the unborn is not a campaign issue. But Paul Ryan's support for the "Sanctity of Human Life Act" was becoming a media-generated scandal in the wake of the controversy over Akin. Romney and Ryan, who also asked Akin to step down, got blowback from the media campaign that they themselves assisted and had joined.

Once again, in ganging up on Akin, Republicans and conservatives lost sight of the real extremist, Barack Obama, while ceding ground to the liberals and allowing them to control the parameters of the public debate. It is a scenario that is played out over and over again, as if the Republicans never learn.

Or perhaps a Republican like Romney, who supported abortion rights in Massachusetts, knew exactly what he was doing and where this is all going — the eventual elimination of the social issues from the national Republican agenda. Romney has made it quite clear that he wants no part of them, preferring instead to run on economic and financial matters. He doesn't even want to talk about security problems in the State Department, in the person of Muslim Brotherhood-connected official and Hillary Clinton aide Huma Abedin.

Another despicable performance in the Akin matter was turned in by Rush Limbaugh, who said Todd Akin's comments on rape and abortion were "stupid." This is the guy who advertised his own stupidity in accusing law student Sandra Fluke of being a slut for demanding birth control services for women. Limbaugh didn't understand that birth control pills have legitimate medical purposes and are not used exclusively to prevent pregnancy. Limbaugh apologized for his remarks.

Thanks to Limbaugh, Fluke became a national and sympathetic figure and is speaking at the Democratic National Convention on behalf of Obama. Indeed, Limbaugh's role in sparking Democratic charges of a Republican "War on Women" helps explain the Republican overreaction to Todd Akin's comments.

Akin's remarks were stated in a confusing manner but have been defended by those who understand the point he was making — that pregnancy in the case of forcible rape is rare but that it is not the child's fault if pregnancy results from rape. One of the most interesting commentaries came from Ryan Bomberger, who wrote a column entitled "As Someone Born After Rape, I Say Todd Akin Shouldn't Step Aside" and said those after Akin were "hypocritical pro-abortion radicals and spineless Republicans."

The Akin controversy could have been a teaching moment for Republicans who want to advance the right to life. Instead, Republicans led by Romney used it to try to purge the ranks of a leading conservative. As a matter of fact, it did become a teaching moment. It tells us a lot about Romney and those putting partisan interests over conservative principle and honest journalism and debate.

These people say they want to win. But they are acting as if they really want to lose.

June 18, 2021
Murder incorporated: Theirs and ours

June 5, 2021
Will the Deep State remove Biden from office?

June 2, 2021
How the Communists outsmarted us

May 27, 2021
The psychopaths in Beijing, Moscow, and Washington