Cliff Kincaid
The presidency from hell 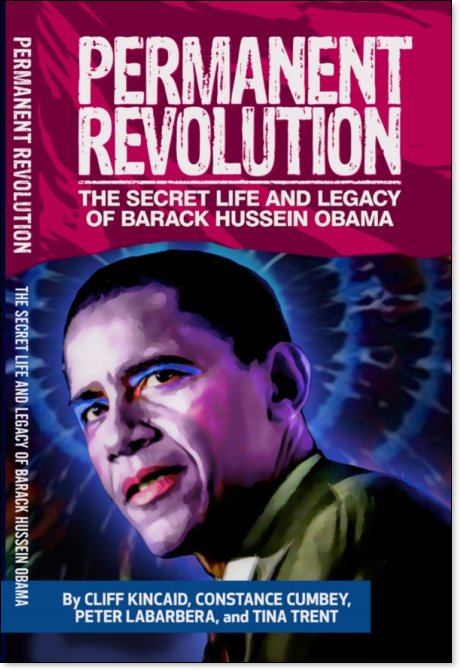 Joel Gilbert argues that Michelle Obama will replace Joe Biden as the Democratic Party presidential nominee in 2024. Whether it’s Michelle or somebody else, Barack Hussein Obama is running the show. His former vice-president, Biden, is clearly a front man, who nominated another front man, Attorney General Merrick Garland. His job is to keep Donald J. Trump out of the White House so that the Democratic Party can consolidate its power as the leading socialist/communist organization in the “Free World,” on the road to a global utopia through a process the Marxists call “Permanent Revolution.”

The report that a federal magistrate linked to Obama approved the raid on Trump’s home is just one more example of who’s calling the shots.

Don’t worry about Hunter’s “laptop from Hell.” This is the presidency from Hell, a third term for Barack Hussein Obama.

We wrote three books about this—Red Star Rising, Comrade Obama Unmasked, and Permanent Revolution—describing what we are living and suffering through.

They leave no doubt that America’s current predicament is the result of eight years of Obama, a Marxist student of Russian agent Frank Marshall Davis who met with Chinese Communist President Xi to plot the final phase of the world revolution. The Chinese press called it a meeting of “veteran cadre”—yet another indication that Obama’s Marxist experiment was being organized in cooperation with China and Russia. That meeting preceded the release of the China virus.

Remember that Senate Republican Leader Mitch McConnell stopped Obama’s nomination of Garland to the Supreme Court, then turned around and voted for his nomination as Biden’s Attorney General. Trump got three Supreme Court vacancies as a result, but is now in the crosshairs as he contemplates another presidential run. Garland is an agent of Obama, and McConnell has to know it.

In addition to publishing three books on the political significance of the Obama presidency, my group America’s Survival, Inc. warned the Senate that Garland, then a federal judge, was implicated in a major cover-up involving a member of the Weather Underground, the terror group whose leaders Bill Ayers and Bernardine Dohrn backed Obama for the presidency in 2008.

Before YouTube terminated my channel, eliminating 500 videos from public view, I had analyzed the issue of Merrick Garland’s involvement in a court case brought by the Obama administration to drop terrorism charges against a communist by the name of Elizabeth Anna Duke. She was a member of a Weather Underground spin-off that specialized in terrorism—including bombing the U.S. Capitol in 1983—and fake IDs. Then-Judge Merrick Garland found no problem with a magistrate who arbitrarily dropped the charges against her, at the request of Obama’s Justice Department.

Obama was determined to get Merrick Garland on the Supreme Court but had to settle for the Attorney General position. As a result, numerous communist terrorists remain on the loose.

The issue is Obama, not Joe Biden or Hunter Biden. The Biden Crime Family is real but a distraction. Obama is the one behind the curtain.

For eight years, we tried to warn Americans people about the lasting significance of the Obama presidency.

More relevant than ever before, America’s Survival, Inc. released a hard-to-find copy of the 1961 House Committee on Un-American Activities analysis of the book How Parliament can Play a Revolutionary Part in Transition to Socialism. This is a how-to-book on how communists overthrow non-communist majorities and make democracies into dictatorships. The author, Jan Kozak, historian of the Communist Party of Czechoslovakia, outlined how a parliament or legislative body (such as the U.S. Congress) can be helpful in “transforming democratic nations” into communist countries. Hence, we see party-line votes for more federal control over the U.S. economy, the latest being the “Inflation Reduction Act.”

For the doubters, consider Biden’s nominee Lenin scholar Saule Omarova as Comptroller of the Currency. Her thesis was titled “Karl Marx’s Economic Analysis and the Theory of Revolution in The Capital.”

Can America be saved? We have to understand the history of communism and look at the examples of how Marxist regimes can be undermined and overthrown.

To begin with, let’s dispense with the terms “woke” and “cancel culture,” which mask the true nature of our predicament.

Meanwhile, Afghanistan has become a heavily-armed Islamic terrorist state; Democrat Nancy Pelosi provoked a Chinese invasion of Republic of Free China on Taiwan; and when Biden showed his weakness by approving another Russian gas pipeline to Europe, Russia launched a war in Ukraine to demonstrate its economic power in Europe. It was President Bill Clinton who convinced Ukraine to give its nuclear weapons back to Moscow 30 years ago.

Biden’s response has been another no-win war.

Meanwhile, we are witnessing the ominous advance of communism in the Western hemisphere, an advance labeled by the media the “Pink Tide.” Even “60 Minutes” ran a story, too late to make a difference, about communist inroads in Central America.

When you hear about “The Worst Mass Migration Crisis in History,” understand the communist roots of this problem.

Vladimir Putin, speaking at the plenary session of the 25th St. Petersburg International Economic Forum, declared, “Changes in the global economy, finances, and international relations are unfolding at an ever-growing pace and scale. There is an increasingly pronounced trend in favor of a multipolar growth model in lieu of globalization. Of course, building and shaping a new world order is no easy task.”

As we educate the people, documenting global trends in our World Revolution Report, don’t fall into Putin’s trap. His “New World Order” spells the end of America. He wants the death of the dollar—and the death of America. His troops are now in Latin America.

We warned America many years in advance about the communist takeover of America. Trump’s presidency was a surprising pause in the consolidation of their power, after Republicans John McCain and Mitt Romney lost to the Marxist candidate Obama.

Now Trump wants to take on these communists—again. He calls them “radical Left Democrats.” No, Mr. President. They are worse than that.

We saw what they intend to do with the arrest of the would-be assassin of Justice Kavanaugh. The psycho, probably on dope, turned himself in!

Forget the talk about “The Biden White House.” The Biden administration is the spawn of Barack Hussein Obama. You can't understand what's happening now without an appreciation of Obama's communist mentor, Frank Marshall Davis, and Obama's relationship with China, Russia, and radical Islam.

The issue isn’t the “laptop from Hell.” It’s the presidency from Hell, in the form of a “former” president, Barack Hussein Obama, whose vice-president is now a figurehead president and his son Hunter is a major distraction who will be handled with kid gloves.

August 22, 2022
How and why Republicans lose elections

August 13, 2022
A message from Cliff Kincaid to his supporters