January 13, 2014
Last Thursday evening, after having left a message for the Washington Post's Bob Woodward to talk to him about his recent article regarding Robert Gates' book, "Duty" – in which the former secretary of defense under President Barack Hussein Obama rips the "mullah in chief" over his derelict if not treasonous leadership in waging war in Iraq and Afghanistan, not to mention the Rules of Engagement for our servicemen, which favor the Muslim enemy over our own troops – I reminisced about the Watergate scandal during the administration of Richard Nixon. Bob Woodward, along with his then equally young partner, Carl Bernstein, uncovered what at the time was the biggest government scandal in American history. So, that evening it seemed like a good time to again watch a video of the Hollywood film about their exploits, "All the President's Men."

My movie experience put in relief the current state of the nation under Obama. Much like Nixon – who used the CIA not only to break into the Watergate Office Complex to spy on the Democratic National Committee during the 1972 presidential campaign, as well as employed the spy agency, illegally, to conduct surveillance on and smear other political enemies – Obama is now using his NSA and CIA to spy on over 300 million American citizens. Indeed, while Nixon's constitutional violations were limited, Obama's are so widespread as to constitute the largest abuse of power in U.S. history. And while Nixon primarily subverted his Justice Department and FBI to create the appearance of a bonafide investigation of the Watergate scandal and thus cover it up, Obama not only uses his Justice Department and FBI to achieve the same ends, but also his enablers – both Democrat and Republican (such as Rep. Peter King) – to run interference for him. One can only surmise what these enablers might be getting in exchange – Nixon style – for their largesse.

When you layer the burgeoning NSA scandal with Obama's other scandals, from IRS-gate, to Benghazi-gate, to Extortion 17-gate, to Obamacare-gate, to Fast and Furious-gate to now Gates-gate over the president's traitorous acts concerning our military, ironically the cartoon below that says Nixon is not a crook by today's standards takes on an eerie reality. 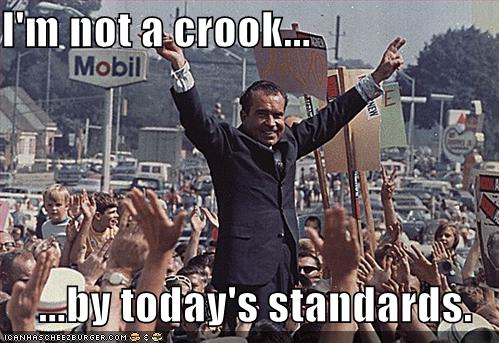 The current state of the Obama scandals are indeed "Worse than Watergate," the title of a book ironically written by Nixon White House counsel and whistleblower John Dean about the privacy abuses during the Bush-Cheney years when warrantless wiretaps were ordered by the White House for a limited period following September 11. (Bush later stopped this practice after a public outcry and Supreme Court rulings in related cases.) Not in the history of the United States have We the People had to endure so corrupt and incompetent a chief executive, and I am including former President Bill Clinton with whom I locked horns during the 1990s and obtained a court ruling, the first in American history, that he had committed a crime in violating the privacy rights of Kathleen Willey, a widow Slick Willy had sexually harassed in the Oval Office.

What puts the capper on Obama's new indoor world record for presidential sleaze is indeed spelled out in the soon-to-be released Gates book. According to another book review that appeared in Investor's Business Daily, here is how Obama's corrupt leadership has caused the deaths of American heroes.

"... Obama helped ensure failure with restrictive rules of engagement reminiscent of LBJ's micromanagement of Vietnam. A perfect example was the Extortion 17 mission in Afghanistan, where rules of engagement prevented the use of suppressive fire as members of Navy Seal [sic] Team 6 were sent to assist an Army Ranger unit engaged in a firefight with the Taliban.

"The Chinook helicopter carrying the rescue team was shot down by a Taliban-owned rocket-propelled grenade over Wardak Province on Aug. 6, 2011, killing 38, including 30 Americans and 15 members of Navy SEAL Team 6, the unit that killed Osama bin Laden just three months prior.

"It was Biden who painted a bull's eye on the backs of SEAL Team 6. On May 3, 2011, he spoke at a dinner at Washington's Ritz Carlton Hotel of 'the incredible, the phenomenal, the just almost unbelievable capacity of his Navy SEALs and what they did last Sunday,' meaning the killing of bin Laden."

As the article reads, "Gates paints a disturbing picture of a White House consumed with political calculations in wartime and making halfhearted military decisions based on politics and ideology and not on the security interests of the U.S. or the welfare of the troops fighting its battles."

Gates' account of Obama's role as commander in chief, his interaction with military brass and lack of concern for the lives of our brave fighting men and women takes the nation far beyond what it ever could have imagined during the Watergate era, when I was fresh out of Duke University and working for Sen. Richard S. Schweiker, R-Pa., just down the hallway in the Dirksen Senate Office Building where the joint committee investigating Watergate met. Indeed, Obama's high crimes and misdemeanors now far surpass anything Nixon did. And, Nixon was not a traitor! But unlike Nixon, who was effectively forced to resign, Obama is left in office to continue to do serious and deadly harm to the nation and our body politic as a whole.

Perhaps out of fear of being branded racists, among other factors including the general ethical decline of our ship of state, our so-called elected representatives in the House of Representatives and Senate do not have the ethical fiber or courage to commence impeachment proceedings and convict this felonious traitor – thereby removing him from office. But one thing is clear: If we leave this dishonest, socialist fraud in the office much longer, we will likely not have a country left.

To this end, it falls upon We the People to fashion appropriate non-violent civil disobedience to get rid of Obama. If Gandhi could cause the fall of the British Empire in India, if the masses in Egypt could rid themselves of the Muslim Brotherhood and if the Poles could cast off communism years ago, then we Americans can send Barack Hussein Obama – the most unethical and corrupt president in American history – packing. The time has now come to put words to deeds and wage the Second American Revolution. See www.reclaimamericanow.net.