Larry Klayman
Muslim of the Year

December 29, 2015
As we celebrate the birth of our Savior, Jesus Christ, and rejoice in the greatness of His and the Father's universe, we turn to the New Year. A traditional ritual is reflecting on the past year, and as Time Magazine does, anointing the most prominent person of 2015. Indeed, 2015 has been for all practical purposes the "Year of the Muslim." So I will satirically recognize the most influential "Muslim of the Year," someone who has cleverly through various means, radically changed the world order and most furthered the Islamic caliphate based on the death of all infidels to Allah.

The contestants were Ayatollah Ali Khamenei, the supreme leader of the Islamic Republic of Iran; Abu Bakr al Baghdadi, leader of ISIS (Islamic State); Bashar al-Assad, the dictator president of Syria; Mullah Akhtar Mansour and Akhund, co-leaders of the Taliban; Sayed Hassan-Nasrallah, head of Hezbollah; Khaled Mashai, leader of Hamas; Nihad Awad, executive director of the Council for American Islamic Relations; and none other than our fraudulently twice-elected president, Barack Hussein Obama.

It was a close contest. Initially, as in the Miss Universe pageant, the prize inadvertently was announced to have gone to two co-contestants: Ayatollah Ali Khomenei, supreme leader of Iran, and Abu Bakr al Baghdadi, the leader of ISIS – one a Shiite and the other a Sunni Muslim, but both evil Islamic terrorists heading up major nations and terrorist groups who have wreaked deadly bloodthirsty havoc on Christians, Jews and other "non-believers." Need we say more about Iran, which carries out, supports and finances Islamic terrorism worldwide and now is on the verge of assembling atomic bombs with the delivery system to reach U.S. shores? ISIS speaks for itself, a brutal and well-financed terrorist organization that has captured huge swaths of the Middle East and is beheading Christians and Jews right and left, thus attempting to destroy our Judeo-Christian way of life and our infrastructure and defenses. And, it has Israel, the United States and Western Europe firmly in its sights. The Paris and San Bernardino bombings and shootings are just a warm-up act for these vicious Muslim fanatics.

But when the card at the award ceremony for "Muslim of the Year" announcing their victory was double checked and inspected by independent experts on terrorism, it was revealed that the prize was, in reality, meant for our own supreme leader, Barack Hussein Obama. 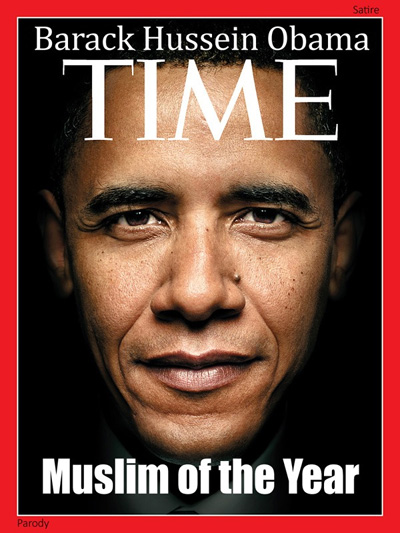 No other Muslim has done as much, particularly given his power as president of the United States, to further Allah's goal of a Christian and Jew-free world. The Holy Quran, as Obama likes to call it, teaches that this false god's will must be obeyed and that all infidels must perish from the earth. As the inscription reads on a ring the "Muslim of the Year" has worn since college, "There is no god but Allah," his actions and non-actions have paid homage to his real and only "deity." Indeed, Obama can issue all the Christmas messages he falsely utters to the American people and the world – pretending to be a Christian for political expediency, subterfuge and dastardly cover – but after seven years of his presidency, "We the People" are no longer fooled. You do not have to be Donald Trump to see reality at this point. And here is the concrete proof.

Notwithstanding that Obama's Kenyan father was a Muslim – who, ironically, was deported from the United States as having been illegally here under an expired visa – the president's actions and non-actions in unconstitutionally pushing through a fatal and disastrous nuclear treaty with Iran in 2015 speaks for itself. And, even if the neutered and corrupt elephant of the Republican Party establishment stood by and effectively allowed this to happen – including but hardly limited to presidential candidates Sen. Marco Rubio and Gov. Chris Christie – the simple and uncontroverted fact is that the Islamic Republic is now just days away from assembling atomic bombs that will be trained on Israel, the United States and Western Europe. Even if this designated terrorist state does not immediately use them on us, the threat that atomic weapons could reign down is enough to allow these Iranian Shiites to have nearly free reign to further the caliphate of Allah. Obama knows this, and by entering into this existential threat of a treaty, without the legally mandated and proper advice and consent of the U.S. Senate as constitutionally required by our Founding Fathers, he has done more to advance the goals of an Islamic caliphate than any terrorist or group could have ever hoped to achieve. We the People now stand on the precipice of an Islamic nuclear Holocaust that could wipe out not just Christians and Jews but cement the Muslim caliphate against Hindus, Buddhists, Shintos and other world religions that do not accept Allah and his degenerate Prophet Muhammad as god.

Then there is Obama's so-called confusion and inaction in wiping out ISIS. Those on the right and elsewhere on the non-leftist political spectrum are afraid to call it like it is for fear of being branded racists against our first black leader, and instead attribute this to the president's alleged weakness. Even Fox News, which thank God exists to counter CNN, the "Communist News Network" and its pathetic and perverse ultra-leftist sister MSNBC, avoids saying it like it is. Obama deserves the title of "Muslim of the Year," and his championship heavyweight ring is not likely to be removed any time soon. He knows what his calculated actions have wrought – the most powerful and well-financed terrorist organization in the history of the world, far surpassing the fictional "Spectre" of James Bond 007 fame. Thanks in large part to Obama, there now exists ISIS and its Islamic state, coupled with a nuclear Islamic Iran, with the means and money to eventually achieve Allah's goal of worldwide domination by Muslims and extinction of the rest of us.

I can go on and on, but space limitations "limit" me from providing even more proof why this most regrettable and dangerous commander in chief deserves the award of "Muslim of the Year." While the embedded Time Magazine cover is parody and satire, the real-world facts behind this are not. And, the consequences are potentially deadly for Christians (and Jews and other non-Muslims) this Christmas!

Let us put our faith in Jesus and the Father to again save us all!