Larry Klayman
The Wicked Witch and the Palestinian 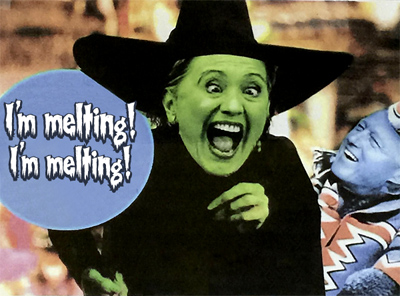 When I was a little boy, frequently I would watch "Laurel and Hardy" on television with my younger sister. The mantra of the old time comedy show was, "A fine fix you have gotten us into now, Ollie," as the two comedy characters would blunder into one "fix" after another.

Well, the same can now be said for Hillary Clinton, the Wicked Witch of the Left, and her heretofore live-in girlfriend, Huma Abedin. The two of them were so close – indeed, up until now, they reportedly shared the living quarters on the Clinton presidential campaign plane – they they could only be separated by a crowbar.

Huma Abedin is of Palestinian descent. Given her mother's and family's close affiliations with the Muslim Brotherhood, and other terrorist offshoots, she was and is a threat to the national security of not just the United States but our strongest ally, Israel. Her "influence" on Hillary Clinton, not just at the State Department where she worked alongside the Wicked Witch, but in general during the Obama administration, helps explain – notwithstanding Obama's own Muslim heritage and not too masked anti-Semitism – the strong tilt of the United States toward Arab countries and interests in the last eight years.

Indeed, under the reign of Hillary's and Huma's Muslim-oriented foreign policy, the Jewish state was treated not just as a second-class country, but like dirt. As just one example, the regime in the Islamic Republic of Iran, once on the verge of collapse in 2009 thanks to the Green Movement and student uprisings, is now a superpower, thanks to the reckless and compromised Iran nuclear treaty and other outrages. The radical mullahs in Tehran, lead by the supreme leader, are on the cusp of having nuclear bombs with the means to deliver them via intercontinental missiles to not just Israel, but Western Europe and the United States. The Islamic regime's army and navy have also been built up to a huge degree under the stewardship of the Iranian Revolutionary Guard. So powerful has this terrorist nation become that its surrogates in the Middle East, such as in Yemen, can feel free to fire on American warships with little to expect in retaliation. Of course, Iran, due to billions of dollars in unfrozen U.S. laundered cash, has become even a greater sponsor of terrorism.

The recent revelations of last Friday come as no surprise – that there are tens of thousands of unread, relevant Huma Abedin emails concerning her work, if not dalliances, with Hillary Clinton on a laptop computer jointly owned by Abedin and her now-estranged perverted husband, former Rep. Anthony Weiner.

Anyone who works or plays in and around the Wicked Witch is by definition – given Hillary's sordid past history of tens of scandals – deeply enmeshed in her criminality. That goes for the slime also known as John Podesta, Harold Ickes and Cheryl Mills, the troika of crooks and bottom feeders, among many including Virginia Gov. Terry McAuliffe, with which the Wicked Witch has surrounded herself for decades, going all the way back to the days leading up to the election of Bonnie and Clyde as president and first lady in 1992. While Huma Adebin is a relative newcomer, she came on fast and loose in burrowing into Ms. Hillary's tortured lifestyle and political modus operandi.

Now that FBI Director James Comey has done an about-face to save his career and own political skin, and allegedly reopened the bureau's investigation into the criminal misuse of the Wicked Witch's private email server, the nation is about to learn much more about the association of Hillary Clinton and her Palestinian girlfriend, confidante and adviser. While we cannot expect to get the full lowdown prior the the presidential election, which is just about a week away, some fragment of the truth of the "H&H" relationship, both professional and personal, is bound to formally emerge in one form of another. However, don't expect much of the real story from some leftist political rags such as the New York Times, the Washington Post or even CNN, the official Clinton News Network. And, even Fox News is likely to shy away from publishing and broadcasting a complete account of Hillary's and Huma's "closeness."

While it remains extremely unlikely that Hillary will ever be indicted by either a Democrat or Republican Justice Department – as the establishments of both parties protect each other's so-called elites – Huma is likely to be sold down the Nile by the Wicked Witch and her influential corrupt friends. By sharing a laptop computer with her now-spurned Weiner, Huma probably illegally gave him access to classified national security documentation and information, notwithstanding her own breach of national security protocol and criminal laws. Thus, expect the Palestinian to eventually be wearing pink prison garb – and not in the Arizona Maricopa County jail of Sheriff Joe Arpaio but in a federal penitentiary.

The Wicked Witch and her entourage have never been known for their loyalty. Just ask Vince Foster, Hillary's last male lover, before she went to the other side.

Vince was deputy White House counsel and a former law partner of the Wicked Witch at the Little Rock, Arkansas, Rose Law Firm. Vince covered up for Hillary in matters including but not limited to tax evasion and Filegate (the illegal obtaining of over 900 FBI files on Clinton adversaries), only to wind up face-down dead in Fort Marcy Park in a northern Virginia suburb near to the White House when the heat in the Clintons' scandal-ridden kitchen got too hot and was about to be fully exposed.

So the past "H&H" roadshow, while sinister, is likely to be a best-seller in the months and even years to come. Look for more deceit and rank criminality by the Wicked Witch and her accomplices like Podesta, Ickes, Mills and McAuliffe, whether she is elected president or not on Nov. 8, 2016.

Also, look for Huma to be the only one indicted and convicted of any crime. For the Wicked Witch of the Left, love does not last forever. Only her sleaze does.