January 16, 2017
The irony of all irony. As President Barack Hussein Obama prepares – hopefully – to leave office with the nation in near ruins thanks to his hateful and destructive tenure in the White House, the socialist Muslim In Chief's dog Sunny attacked and left scars on a family friend visiting the executive mansion. Here is what the New York Post reported:

President Obama attended to a minor White House emergency earlier this week after a visitor was bitten in the face by the first family's 4-year-old dog.

The unnamed 18-year-old family friend was visiting the White House on Monday when she went to pet and kiss Sunny, the president's fluffy female Portuguese water dog, sources told TMZ.

But the presidential pooch didn't take kindly to smooches and chomped down on the teen's face, leaving a half-inch gash under her left eye, according to the gossip site.

Jackson said the bite would leave a small scar, which apparently upset the teen, who posted photos with angry captions after the incident, according to multiple reports.

"I f—g hate sunny," she captioned a Snapchat selfie of herself and Malia Obama. 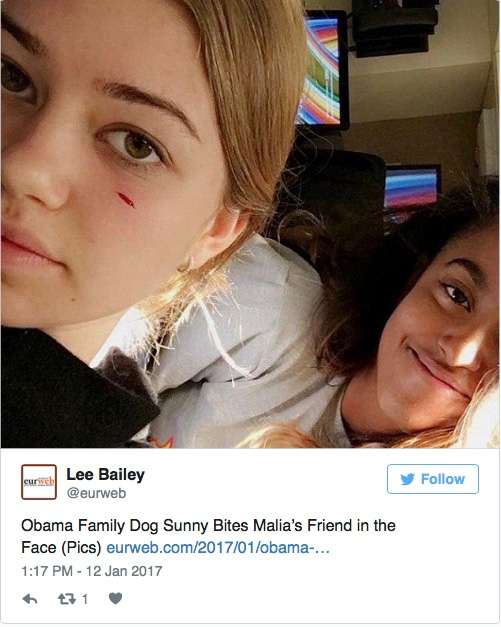 Well, its not just a young family friend that has been bitten, but Sunny's master, Barack Hussein Obama, who himself has left scars on freedom-loving peoples here and, this week, in Cuba. I would suspect that the latter are also today using expletives to describe Obama's bending over once again to the Castro family and their communist regime.

It is a double irony that as Obama and his leftist henchmen in the establishment media hypocritically accuse President-elect Trump of cozying up to, being to close to and collaborating with Russia's communist dictator, Vladimir Putin, to influence the presidential election last November, Obama, just last Thursday, as part of his vindictive bevy of eleventh-hour executive actions, eliminated the "Wet Foot Dry Foot" policy put into place by former President Bill Clinton.

This Clinton immigration policy, while objectionable at the time since it did not go far enough, at least allowed Cubans fleeing the communist hellhole of the Castro brothers to automatically obtain asylum and residency, if they set foot ashore in Miami or elsewhere in the United States. Indeed, over the last many decades, Cubans sought freedom from communism by getting into rafts and other makeshift boats and, under cover of darkness, "setting sail" for South Florida. As the founder and former chairman and general counsel of Judicial Watch, I represented a valiant Cuban American, Jose Basulto, whose Brothers to the Rescue organization would routinely fly sorties in small Cessna airplanes over the Florida Straits, rescuing these brave freedom seekers. For his heroic efforts, four of Jose's Brothers were shot down by Castro's air force, and Jose himself was almost killed. I brought a lawsuit to seek redress for this brutal terrorist assault and won a near $2 million judgment for Jose against the Cuban government, an award which to this day goes unpaid thanks to Obama's not having made this a condition of opening up diplomatic relations.

But now that Obama is leaving office, through yet another executive action concerning immigration – his last one granting amnesty to almost 5 million illegal criminal and other aliens was nullified by the courts in cases I participated in on behalf of Sheriff Joe Arpaio – the Castro-loving Muslim in Chief has thrown yet another bone to the communist island. Now, Cubans fleeing the island for freedom will be returned involuntarily to Cuba, likely to face retribution, imprisonment and possibly even death for their "traitorous" actions.

So there you have it: Obama will grant amnesty for illegal criminal aliens, but deny freedom-loving Cubans the chance to win freedom by risking their lives to reach our shores.

On his way out the door, Obama and his socialist, pro-Muslim, anti-Semitic, anti-Christian and generally racist comrades have not just bitten our "Cuban brothers" who seek freedom, but also Israel, American law enforcement and others who do not compose his "chosen people," leaving scars that will not now be easy for even a President Trump to heal.

So its not just Sunny who has left scars. While the poor dog unintentionally drew blood on the young visitor's face, much worse his master willfully and hatefully commits yet another destructive and vicious attack on freedom.

There are only seven days left before Donald Trump is sworn in as our nation's 45th president, but this joyful event cannot come soon enough! Given Obama, Hillary Clinton and the left's continuing and increasing attacks on the legitimacy of the Trump presidency, We the People cannot have our guard dog stand down. As I penned in last week's column, it's time that our loyal canines sharpen their freedom-loving teeth to legally eliminate the Obamas, Clintons, Schumers, Pelosis, leftist "evildoers" who will not give up on their relentless quest to destroy the vision of our Founding Fathers, conceived of and put into practice that fateful day on July 4, 1776, in my native city of Philadelphia.