January 30, 2017
Never before in our nation's history have We the People witnessed such sleaze in the leftist media. Even during the Clinton White House years, such left-leaning networks as CNN, CNBC and MSNBC maintained a degree of objectivity, however slanted. As a few examples, I frequently appeared on CNBC's "Geraldo Live" and Chris Matthews' "Hardball," as well as various MSNBC shows, even when I had the proverbial "legal knife" to the throats of the Bonnie and Clyde of American politics, President "Slick Willy" Clinton and first lady "Wicked Witch" Hillary Clinton. In addition, even the generally dishonest New York Times and Washington Post, a paper who shared legal counsel with the Clintons, David Kendall of Williams and Connelly, were able to maintain a modicum of decency toward conservatives like me.

But over the last few years, with the emergence of the tea party and then the rise of Donald Trump, the fall of the Wicked Witch's presidential ambitions and the long awaited exit of the Muslim king, Barack Hussein Obama, the leftist media have just gone "ape s–t."

Now CNN is far worse that its previous characterization as the Clinton News Network. Showcasing black communist activist Van Jones in prime time, coupled with another Obama clone, Don Lemon, the network has gone further left than even hard left. It now appears more communist than even RT, the Russian cable network broadcasting throughout the United States. And, even CNN's formerly not too way out anchors like Jake Tapper, Anderson Cooper and Wolf Blitzer have had to kowtow to the network's hateful and ultra-leftist brass and regrettably compromised their journalistic ethics, undoubtedly not just to boost ratings among any Obama and Clinton voters, but to suck up to their leftist colleagues. This now has become quite fashionable, not just at CNN but elsewhere. Literally, among these leftist media elites, it has become a sort of club, not just to bash and delegitimize the presidency of Donald Trump but to destroy the conservative movement in general.

As I mentioned in my last column, perhaps the worst case of reporting I have ever seen in my life was when Wolf Blitzer of CNN broadcast a piece the day before President Trump's inauguration suggesting how he could be assassinated by terrorists during the ceremony and in effect signaling that if this occurred before Trump was sworn-in, the presidency might inure to an Obama Cabinet member – if Vice President-elect Mike Pence and Speaker Paul Ryan were also killed. If this cheap and disgusting broadcast had been aired by Fox News, you could have bet the ranch that the Secret Service would have been ordered by Obama to arrest the perpetrators and then have the Justice Department indict them.


This attack on the Trump presidency is not isolated. Just days later Madonna, a CNN clone, called for the bombing of the Trump White House. And, a daily perusal of the headlines of the New York Times and Washington Post, not to mention the out of control Huffington Post, among hordes of other leftist rags, whip up so much hatred against Trump – accusing him without basis of lying with every word out of his mouth – that they are furthering a potential assassination attempt, which I believe they would welcome.

It is telling that in the eight years of rule by the Muslim king, not only did conservative networks and print and Internet media never advocate his physical demise, but they never whipped up the hatred we are now witnessing. And, as we sadly witnessed during recent leftist demonstrations in Washington, D.C., in and around the time of the inaugural, the nation never was subjected to conservative crowds vandalizing stores, breaking windows and otherwise fomenting mayhem and destruction.

It is now clear that the country is in the midst of a counter-revolution. Without their comrades Obama and Hillary Clinton, the left – financed largely by that evil anti-Semite atheist George Soros – has embarked to take the republic down, and then refashion it in their "National Socialist" design.

I know what these evil forces of the left are all about, and I have over the years developed a very thick skin. Indeed, one can measure one's success by those who go on the attack. For instance, I was in a strange way flattered when CNN's Don Lemon, an intellectual midget and Obama wannabe, went after me when I scored the biggest victory in the history of government litigation and had a federal court preliminarily enjoin the National Security Agency from surveiling the telephone calls of hundreds of millions of Americans. The court found that this was a violation of the Fourth Amendment of the Constitution and characterized this spying as "almost Orwellian," that is, a "Big Brother" danger to our democracy. Yet Lemon and CNN instead attacked me, rather than giving me credit for this great legal victory.


But what CNN did to try to figuratively assassinate me as a public advocate and lawyer pales in comparison to their complicity in the suggested assassination of now President Donald Trump. 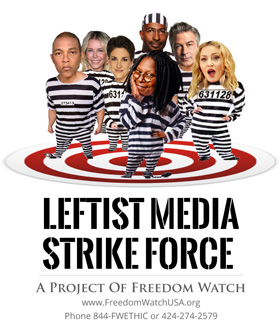 That is why you have my commitment to do whatever I can to take down these evil forces of the leftist media. They collectively have gone way beyond the pale of their leftist ideology and predilections. At present, it is either them or us, and we must use whatever legal means exist to eradicate their sleaze. For this reason I have formed a Leftist Media Strike Force at Freedom Watch.

The time is now for action. We cannot allow the leftist media to destroy the last chance we may ever have to set the nation on a course to "Make it Great Again!" – and we cannot allow it to further calls to kill our president and throw the country into destructive chaos and counter-revolution!