Administrator of the Catholic Diocese of Charleston stepped in it... Part One 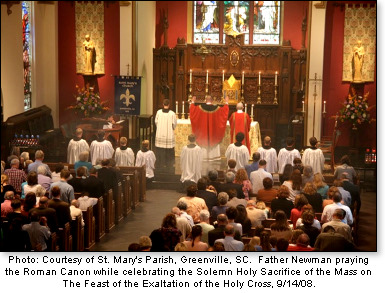 Recently, a Charleston Catholic diocesan pastor, Father Jay Scott Newman, JCL, wrote a column to his flock which he published within his November 9, 2008 St. Mary's Catholic parish bulletin. [1] In it, Fr. Newman advised:

"Voting for a pro-abortion politician when a plausible pro-life alternative exists constitutes material cooperation with intrinsic evil, and those Catholics who do so place themselves outside of the full communion of Christ's Church and under the judgment of divine law. Persons in this condition should not receive Holy Communion until and unless they are reconciled to God in the Sacrament of Penance, lest they eat and drink their own condemnation."

Everyone who is in good standing with the Catholic Faith would automatically agree with Father's statement and applaud his pastoral action. And they should. Fr. Newman holds graduate degrees in Sacred Theology and Canon Law and knows whereof he speaks. [2]

Recently, this writer asked Fr. Newman for an interview. This was Father's response:

"Dear Barbara, Thank you for your email. The diocesan administrator has asked me not to give interviews about this matter, and in obedience to his request, I must refer you to the Diocese of Charleston for all inquiries. Thank you. May the LORD bless the work of your hands."

When this writer tried to re-read Fr. Newman's essay published at his parish website, it was apparent the link had been removed. Readers are now automatically forwarded to the diocese of Charleston's website where Msgr. Laughlin's repudiation, in both .PDF and video formats, is found on their front page. Thankfully, I had earlier captured Fr. Newman's bulletin column permanently to my computer and can provide it for you herewith.

"Christ gives us freedom to explore our own conscience and to make our own decisions while adhering to the law of God and the teachings of the faith. Therefore, if a person has formed his or her conscience well, he or she should not be denied Communion, nor be told to go to confession before receiving Communion. The pulpit is reserved for the Word of God.... We should all come together to support the President-elect...."

Nowhere within Fr. Newman's column could this writer find implied that Father Newman could read the minds and hearts of how his parishioners voted in the privacy of their voting booth. Nor did Fr. Newman say he would deny anyone Holy Communion [based on canon 915]. [4] Father would not deny Holy Communion because he would not be aware of any voter's hidden sins. In addition, Fr. Newman did not discuss the principle of 'the ends justifying the means.' Instead, he was measuring the outcome — what is the proportion of good or evil that can be done.

The Charleston diocesan administrator, Msgr. Laughlin, thereby creates more scandal to the already bumfuzzeled faithful. Catholic laity, as well as clergy, is asking each other: 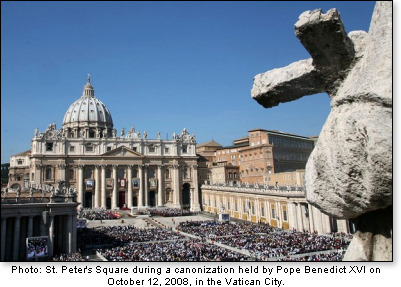 The answer to that question is not difficult to find among the Church's documents. Catholic libraries are filled with the Church's infallibly taught moral documents teaching that abortion has always been condemned by the authority which Christ Himself first conferred upon Peter [the Pope, the 'Solemn Magisterium'] and then his Successors, and to the apostles [those bishops and theologians when in complete communion with the Pope, 'Ordinary Magisterium'] as being a grave mortal sin, intrinsically evil and illicit. This basic moral teaching is based upon natural law and the written Word of God, proclaimed by the Catholic Church through its Sacred Tradition and through its Solemn and Ordinary Magisterium, that no one, no law, can ever make licit an act, which is intrinsically evil and illicit.

Keeping in mind that there will be other faithful priests who will be preaching in the same manner as Fr. Newman, and there may possibly be other diocesan Bishops or heads that try to repudiate these priests, one would do well to recall this column and use it to rebuke error and heresy to those who are confused.

"The theocentricity of the priestly existence is truly necessary in our entirely function-oriented world in which everything is based on calculable and ascertainable performance. The priest must truly know God from within and thus bring him to men and women: this is the prime service that contemporary humanity needs." [5]

Before we visit a few of the many teachings on this moral subject, let us first take a brief look at some of the pro-abortion policies and legislations that President elect Barack Obama supports and has promoted.

Since July 2007, over one year before the presidential election would take place, Barack Obama pledged to his supporters that he would overturn every [hundreds] pro-life law in all 50 states limiting abortion. He said that his very first action would be signing the FOCA, if it became law, codifying Roe v Wade and allowing unlimited abortions in the land. He promised he would not yield nor would he allow Planned Parenthood to yield to pro-life pressures. He vowed to elect judges who would affirm a women's right to abortion. And, he consistently for past 4 years voted against the Illinois Born Alive Infants bill to protect babies who are born alive after a botched abortion. [6] 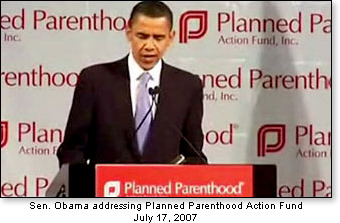 For example, in 1997, Obama voted against Illinois Senate Bill [SB] 230, which would have turned doctors into felons by banning so-called partial-birth abortion [click here and here and here [7] for videos of this infanticide]. The excellent legislation defined a 'fetus' as a person, & could have criminalized virtually all abortion.

No one can doubt, therefore, that it is perfectly clear Barack Hussein Obama will do everything in his power to carry out his campaign promises to continue to make abortion and infanticide the law of our nation and among third world countries. Why would 54% Catholics vote for such a man?

With this clearly established proof of President elect Obama's pro-abortion support the question must be asked:

Is what Fr. Newman taught in his bulletin really "diverting the focus from the Catholic Church's clear teaching against abortion" and Catholics' consciences allowing them to vote for pro-abortion politicians, as Msgr. Martin Laughlin said, or is Msgr. Laughlin seriously confused?

Please go to 'Part Two' to examine what the Catholic Church, its Popes and those Bishops in union with the Pope, teaches us about its Church members forming right consciences, wrongly voting for pro-abortion politicians, and being worthy to receive Holy Communion.


[1]  The 'JCL' designation after a priest's or bishop's name indicates an Licentiate of Canon Law, an academic degree granted by universities for proficiency in theology, philosophy, canon law, etc. The holder is called a Licentiate. The degree ranks below that of a Doctor of Master, and usually above that of Bachelor degree.
[2]  Father Newman studied for the priesthood at the Pontifical Gregorian University in Rome and received priestly formation at the Pontifical North American College; he holds graduate degrees in sacred theology and canon law. He was ordained to the deaconate on 19 December 1992 at St. Peter's Basilica in Vatican City and to the priesthood on 10 July 1993 at the Cathedral Church of St. John the Baptist in Charleston, South Carolina.
Father Newman has served as Catholic Chaplain to The Citadel. Before coming to St. Mary's, he served at the Pontifical College Josephinum in Columbus, Ohio as Assistant Professor of Canon Law in the School of Theology and Dean of Men in the undergraduate College. He began his service as the sixteenth pastor of St. Mary's on 28 June 2001.
Father Newman is a papal Knight in the Equestrian Order of the Holy Sepulchre of Jerusalem and a member of the Fellowship of Catholic Scholars, the Society for Catholic Liturgy, and the Canon Law Society of America. He also serves in the Diocese of Charleston as Director of Continuing Education for Priests and as a member of the Presbyteral Council and the Vocations Board. Father Newman is active in ecumenical affairs, particularly with Anglicans, Lutherans, and Baptists, and is a frequent speaker at conferences and retreats.
Fr. Newman was born on August 6, l962 in Elkin, North Carolina, a small mill town in the shadow of the Blue Ridge Mountains, and grew up in Greensboro, North Carolina. His parents' families were mostly Southern Baptists and members of the Church of the Brethren, but at age 13 he became an atheist. In 1980 he matriculated at Princeton University, and there on 15 October 1981 he experienced a conversion to the Lord Jesus Christ. On 17 January 1982 he was baptized in the Episcopal Church, and on 5 November 1982 he was received into full communion with the Catholic Church and confirmed.
[3]  On August 14, 2007, the Bishop of Charleston, Robert J. Baker, S.T.D., was appointed Bishop of Birmingham, AL, and was ordained to that See on October 2, 2007. The Vatican has not yet appointed another Bishop to govern the Charleston diocese. Bishop Baker, one of the 16 faithful U.S. Bishops who declared publicly that he would deny Holy Communion to pro-abortion politicians, also encouraged the weekly Tridentine Latin Mass within the Charleston diocese.
[4]  "Those upon whom the penalty of excommunication or interdict has been imposed or declared, and others who obstinately persist in manifest grave sin, are not to be admitted to Holy Communion" [Code of Canon Law c.915]. Cf n.4, 'Redemptionis Sacramentum' points out that the priest may find an individual's judgment about his own worthiness to receive the Eucharist to be in grave error and the priest must deny him Holy Communion, according to c.915. Cf "Redemptionis Sacramentum.' warns that manifest persons who are also 'unambiguously pro-abortion" must be refused Holy Communion.
[5]  Address of His Holiness Benedict XVI to the Members of the Roman Curia at the Traditional Exchange of Christmas Greetings, Clementine Hall, Friday, December 22, 2006.
[6]  Cf Planned Parenthood Action Fund speech, July 17, 2007, by Barack Obama. http://lauraetch.googlepages.com/barackobamabeforeplannedparenthoodaction
[7]  This working 'YouTube' link requests you first click on their 'Confirm Birth Date' button, as some of the content, they say, is inappropriate for some users. I recommend that you go ahead and click the button, as this video's content is less violent than most of the programs that are currently on national television during prime time viewing. In fact, when President elect Obama signs the FOCA, a child needs to only be 13 years of age to obtain a murderous abortion without her parents knowledge or permission. Talk about the youth being protected from violent video content.
© Barbara Kralis