July 31, 2009
When President Obama nominated Sonia Sotomayor for the Supreme Court, he said she was selected because he wanted someone who would show "empathy." It occurred to me that Obama wants the same behavior from America's police. 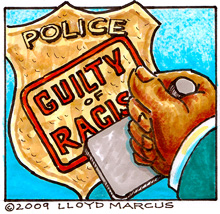 Professor Gates was arrested for disorderly conduct. Because Gates is black, the White House has launched a race committee to "teach" police to be more sensitive. Like his Supreme Court nominee, Obama wants police to give special consideration to race when enforcing the law. So, before you white cops arrest a black person for a crime, think of America's original sin of slavery and all that liberals say blacks are still going through. Perhaps an "I understand where you're comin' from bro" before you cuff him.

Obama's race committee is an absurd waste of taxpayers' money. What on earth does arresting someone for disorderly conduct have to do with race? Gates is either guilty or not guilty. His skin color is irrelevant. Obama making Gates' arrest about "race" is extremely telling  an insight into his belief about white police.

Even though Obama retreated from his original "the police acted stupidly" statement, he still implied that the white arresting officer did something wrong. Why else would he feel the need to organize a race committee? According to the police report and other officers at the scene (one of which was black), Officer Crowley performed his duty by the book.

Obama's refusal to apologize to America's police sends a horrible message to black America. Speaking from the highest office in the land, his words give tremendous credence to the "blacks are victims" paradigm. Think of the hatred and resentment Obama's false assumption that police typically mistreat blacks will inspire in black youths. My goodness, the President of the United States agrees with the gangster rappers, "Yo, if you're black in A-mur-a-ka, da Man is out ta getcha."

Remember the controversy and fear of violence because of the rap song "Cop Killer" by Ice Tea? Our president's comments were extremely divisive and irresponsible.

Something else that disturbs me regarding Obama's handling of the Gates/Crowley incident: Obama could have simply apologized to police for calling them stupid, and America would have moved on. Instead, he chose to organize a race committee and invite Gates and Officer Crowley to the White House for a beer. So rather than admitting that he misspoke, in essence, Obama threw America's police and their relationship with the black community under the bus to save face.

Just as OJ's attorneys masterfully turned his trial from being about a husband decapitating his wife to reparations for the persecution of blacks in America, the Gates case morphed from an arrest for disorderly conduct to a White House study on racial profiling and police mistreatment of blacks.

Last Sunday, the Democrats launched "Operation Defend Obama" at all cost. TV programs were littered with Democrats, race profiteers, and bitter racists defending Obama's statement. Their mantra, "Cops do abuse blacks." They spoke like it was 1959 rather than 2009.

To save their own, Democrats are notorious for sacrificing any and everyone. Democrat President Bill Clinton had oral sex with an intern in the Oval office. To defend Bill, Democrats impugned the integrity and character of all men. Every Clinton administration spokesperson and liberal bias media person implied that any man, if given the opportunity, would have acted like Clinton. Think about that folks. According to their spin, your pastor, father, grandfather, husband, soccer coach, school teacher, and doctor would display the same lack of restraint and character as Clinton if "hit on" by a young woman.

Nancy Pelosi, the Democrat Speaker of the House, without evidence accused the CIA of lying. Did the Democrats encourage Pelosi to apologize for challenging the credibility of this organization so vital to our national security? No. Instead, they set out to trash the CIA.

During the Bush years, Democrats became Captain Ahab in the novel Moby Dick. In their obsession to kill their white whale, George W. Bush, they attacked our military. Shamefully, Democrats accused the brave young men and women who volunteered to defend us, some even paying the ultimate sacrifice, of being rapists and murderers. With our troops on the battlefield in Iraq, Democrat Sen. Harry Reid announced to the world that the war was lost. Can you imagine the damage Reid's statement did to the morale of our troops? When decorated General Petraeus reported the war had turned in our favor, Democrats disgracefully called him a liar. Blinded by their obsession to "get Bush" putting the lives of our troops at risk was merely collateral damage to the Democrats.

Every Democrat decision is always about them preserving and gaining power.

President Obama, we Americans do not want "race based" law enforcement. Nor, do we want Supreme Court justices overruling the Constitution with their feelings. We The People demand adherence to the Constitution and equal justice for all!