January 2, 2010
In defense of Bill Clinton, their Democrat president, the liberal media campaigned to convince Americans that character does not matter. In the midst of the Clinton scandals, I was shocked to hear even a minister say Clinton's affairs were a personal matter and did not affect his presidency. The media spin worked. 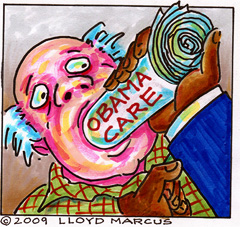 An extraordinary man was featured on the Glenn Beck TV program, Jon Huntsman, founder of the Huntsman Cancer Institute. Asked by Beck to share, Huntsman told a tale of amazing integrity. In the 80s, Huntsman sold his business for 54 million dollars. The buyer's lawyers were slow. In the 6 months it took them to finalize the contract, Huntsman's business grew in value 5 times their original deal. The buyer was willing to pay more. Huntsman said he would stick to their original deal because he had given his word and shook the buyer's hand. Huntsman's character and integrity is a striking contrast to the caliber of men and women we have running our country.

With Harry Reid and the democrats circumventing the will of the American people to pass their unprecedented massive government takeover of our lives disguised as a Health Care bill, Churchill's words could not ring more true. Integrity equals Character. And these evil people have none.

How did these scoundrels get elected? It has been said, "the people get the government they deserve." Do we deserve these socialists who are committed to changing America into an abomination of our Constitution, hijacking our freedom, liberty and culture; bankrupting the futures of our children and grandchildren? Is this the change many voted for? Did we bring Harry Reid's Horror on ourselves? I think not.

Sadly, socialism is what some voters wanted. These pathetic entitlement minded knucklehead losers are still waiting for Obama to pay their rent, buy them a car and provide the gas. But the majority of Obama voters were conned, sold a lie, a moderate candidate. Funny how that "C" word (Character) always comes back to haunt. If a president is a narcissistic liar, it does not matter what he says.

Despite catastrophically high unemployment numbers, our character deficient president looks into the TV camera and boldly proclaims all is well. His blatant lies include the health care bill is deficit neutral, no government funded abortions and no health care for illegals. Obama's character is so flawed you can almost always assume the truth is the opposite of whatever comes out of him mouth. It is horrific to have such a man as leader of the free world. A devastating experience taught me years ago character always matters.

The Old Man and The Lincoln.

My wife and I sold our home in Maryland to pursue a career opportunity in Florida. One of our two vehicles was an old Lincoln with a nightmarish oil leak. After hiring and firing numerous mechanics and spending $1500, the leak continued. We decided to dump the car before leaving for Florida.

An old white gentleman, probably in his 80s, answered our ad. Time grew short and we were desperate to sell the car. I did not want anything to blow the deal. Being an interracial couple, I thought it best Mary, my beautiful blonde wife, show the car to the gentleman alone. I read men like women wearing bright colors. So, I suggested Mary wear her red dress.

Mary met the old man in a restaurant while I waited in our second car. The Lincoln and Mary were a hit. The old man asked Mary to follow him home to finalize the deal. I followed.

As we approach his home, this was before cell phones, I attempted to telepathically tell Mary do not park in his driveway for he would surely notice the oil leak. She parked in his driveway.

Mary stayed in the old man's home for what felt like forever. Because of his frail frame and slow deliberate movements, I had no fear for her safety.

Finally, Mary came out and hopped in the car. "I got it", she exclaimed! "$3000, cash!" Elated, we gave each other a high five. At last the thorn in our side was gone.

As we drove home, Mary explain why it took so long to finalize the deal. The old man was obviously lonely. He liked Mary and shared family albums and stories with her. His wife of many years was in a nursing home. He visited the love of his life every day. Shamefully, I tried to justify our sin. "He is old. He won't drive much. The oil leak is no big deal for him."

Upon entering our front door, the phone was ringing. It was the old man. "Mr. Marcus, can I get my money back? That car is leaking oil something fierce."

Suddenly, I was overcome with shame, sadness and embarrassment. Mary felt the same conviction. When the pressures of life squeezes you, what comes out reveals who you really are. I was devastated by what came out of me. I was so consumed with my needs I sacrificed my integrity. Just as Judas betrayal Christ and sold his soul for 30 pieces of silver, I sold my character for a measly $3000.

My replied to the old man was, "Yes sir, of course we will return your money." Circumstances prevented us from returning his money until after the weekend. Meanwhile, I could not look at that money without weeping.

When we returned his money, the old gentleman thanked and praised us for being good honorable people. However, I knew we should have been honest and upfront with him from the beginning.

Our country is under siege by evil characterless politicians. Yes, I boldly use the "e" word because I believe it to be accurate. Their power grabbing socialistic agenda is an anathema to our Constitution and everything which has made America great.

As Reid and company celebrate their under the cloche of darkness 1am victory vote, they under estimate the power of right and the will of we the people. Our integrity and love for our country will not allow this evil to prevail. 2010 is coming and there will be heck to pay!