January 24, 2010
In 1968, James Brown released his song, "Say It Loud  I'm Black and I'm Proud." The cruelest and saddest effect of slavery and racism in America is that it caused us blacks to hate ourselves. When I was a kid, I picked up an unspoken vibe from my fellow blacks that light-skinned blacks were better than us of a darker completion. "Good hair" meant similar to white. One summer afternoon, my mom yelled, "You kids get in the house! You're gettin' too black out there in that sun!" I remember thinking, What is wrong with getting darker? This mindset is why Brown's black pride anthem was so important and empowering. 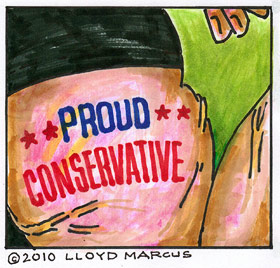 Thank God that today, black youths would consider Brown's song absurd and laughable. Despite what civil rights dinosaurs (stuck in the past), race profiteers, and the Obama administration would have us believe, America's race relations have come a long way, baby.

Blacks are CEOs and multimillionaires. A full-figured, dark-skinned black woman could arguably be the most influential woman in the world, and a black man resides at 1600 Pennsylvania Ave. The emergence of blacks from slavery to power confirms the God-inspired greatness of America. While the NAACP continues to sing, "We Shall Overcome," news flash  the truth is that we have overcome!

As singer/songwriter of the "American Tea Party Anthem," do I need to pen a silly song titled "Say It Loud  I'm Conservative and I'm Proud"? Liberals use their bully pulpits of the White House and mainstream media to misrepresent and demonize conservatism. This has made many conservatives fearful of coming out of the closet. Even George Bush felt the need to soften conservatism by putting the word "compassionate" in front of it. Such pandering to the left only contributes to the lie that conservatism is heartless and cruel. The truth is quite the opposite. Liberalism is arrogant, demeaning, and harmful. True compassion is expressed through conservatism.

And yet, far too often, we conservatives allow ourselves to be put on the defensive for telling the truth and offering our commonsense solutions. We allow the left to dictate the rules and what we can and cannot say. They even determine what is or is not racist. It was recently reported that liberal democrat Senate Majority Leader Harry Reid described then-Senator Barack Obama as "light-skinned" and "with no Negro dialect, unless he wanted to have one."

Here is the blatant double-standard. Jackson, Sharpton, the NAACP, Democrats, and the mainstream media would have a cow had a conservative made the same comments as Reid. After they publicly flogged the racist conservative Republican SOB, they would demand his resignation. Reid apologized, and his liberal buddies ask us to forgive him. I mean after all, isn't that what Jesus would do? Don't you just love it when libs, whose mission is to ban God from the public square, refer to Jesus?

Taking back America requires that we stop being intimidated. We must boldly stand up for what is right, commonsense, and truly compassionate. For example, speaking English is unquestionably crucial to moving forward economically in America. Frustratingly, conservatives who encourage all Americans to speak English are attacked by the left as racist. Shake it off and keep telling and standing up for the truth.

The Tea Party Movement has been a coming-out party for conservatives, a kind of Proclamation of Liberation. We are standing up and saying "no" to political correctness and liberal tyranny. Still, like battered wives, some conservatives are shy about espousing the virtues of conservatism. They cannot bear the pain of being branded with the "R" for racist on their forehead for opposing any Obama agenda item. Nor can they handle being called heartless and cruel for opposing Obama's redistribution of wealth via government-run health care.

On March 27, I will be on the road again with national Tea Party Express Tour III (TeaPartyExpress.org). I performed as a singer and speaker on tours I and II. Perhaps I should take a cue from James Brown and write a song to perform  one that will empower my timid conservative brothers and sisters who have been beaten down by liberal abuse and tyranny. "Say It Loud  I'm Conservative and I'm Proud!"

Now if I can just master a few of those dazzling James Brown dance moves. I can imagine the live report of my spectacular tea party performance: "Reminiscent of the late godfather of soul, amazingly, Lloyd does a spin and a split; the crowd goes wild! Oh my gosh, somebody call 9-1-1!" On second thought, I think I'll stick to just singing and speaking.