April 15, 2010
Lloyd Marcus checking in from the Tea Party Express III tour bus headed to Detroit. We did six electric atmosphere rallies in one day in Michigan. Everyone was excited because our efforts forced Michigan Congressman Bart Stupak to retire. Score one for We The People. 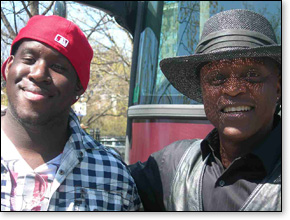 In Michigan, I was excited because a larger number of blacks attended our six tea parties. Several were fans of my music, columns and have read my book, "Confessions of a Black Conservative." They thanked and called me courageous for speaking out. Folks, I am not courageous. My strength comes from my Faith and knowing I am on the right side.

At each tea party, I asked the blacks who approached me for autographs and to pose for pictures how they earned a living. Interestingly, they were entrepreneurs or ex-military who experienced socialism abroad. They are not looking for a handout, nor do they view themselves as victims.

Meanwhile, as I am a prominent black face in the tea party movement (singer/songwriter of the American Tea Party Anthem), the media runs to me demanding to know why the movement is not reaching out to blacks. I retort, "We do not need to reach out to any group in any special way. We simply need to continue telling the truth and promoting common sense conservative principles. Right thinking people will be drawn to the light of our message like moths to a flame. 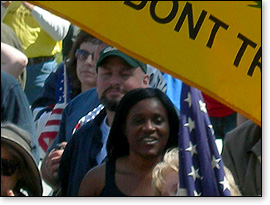 A white reporter interviewed me after my performance at the Traverse City, Michigan, Tea Party. The mostly white audience loved me. With a stone face she asked me a series of annoying typical liberal playbook questions.

But, what really got my blood boiling was when she asked me the following question in her snooty intellectual voice. "Mr. Marcus don't you think by calling yourself an unhyphenated American you are encouraging white people to feel comfortable with their racism."

I wanted to say, "Lady, what the heck are you talking about? You are obviously one miserable, bitter and unhappy human being. Get away from me." Instead, I said, "With all due respect, I disagree." I turned and walked away abruptly ending the interview. I guess I should have stayed and argued my point of view with her, but I am losing patience with these arrogant, they are so much smarter than us, liberal idiots.

At that same Tea Party, I gave a little white boy an autographed copy of my CD. The following is a thank you email from Seth's mom.

I would like to tell you that it was a pleasure and honor to meet you yesterday. My son though to shy to take a photo with you had to show your photo around and the CD you signed for him and say "I met Mr. Marcus and he was nice." He also adds at the end of that, that "He sings real good too!"

I read your book and like it so much that I bought 2 more copies from your publisher so I could give them to a couple of my friends, (I would loan them mine but may not get it back).

Thank you again and please keep fighting the good fight as I will.

Yours in God and friendship

Yep, this white woman really sounds like a racist.

And now about the food. Upon getting back on the Tea Party Express tour bus after our huge rally in Buffalo, NY, there were "Buffalo Wings" waiting for our team. The wings disappeared pretty quickly; medium hot, really good! Talk to y'all soon.