September 13, 2010
I was up in Delaware working with Tea Party Express on the Christine O'Donnell for U.S. Senate campaign. While working on my computer, the maid knocked on my hotel room door. "You really do not need to clean my room. Just make the bed and leave me a few packs of coffee", I instructed. She replied, "Yes sir."

As I worked, the maid quietly made the bed. Then, she picked up and emptied trash. Still, very quiet, she worked in the bathroom. I glanced around as she finished moping the bathroom floor. She left my room quietly closing the door behind her.

I looked around my room and into the bathroom; immaculate, fresh towels and everything.

I don't know how many rooms that woman was scheduled to clean. I thought I was giving her a break by saying she did not have to clean my room. Though she tried to let it go, her character and professionalism compelled her to do her job.

I found her in the hallway, thanked and gave her a generous tip.

Folks, sometimes it feels like our country is going to hell in a hand basket; nobody caring about doing a good job with far too many people feeling entitled and demanding a hand out. For example, remember the two women interviewed who said they showed up to get the free money from "Obama's stash"? 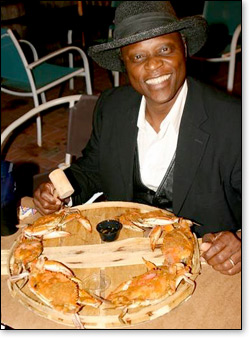 My professional character driven maid reminded me that not everyone is looking for the easy way out or to "get over," which is what the Glenn Beck "Restoring Honor" Rally was all about.

When will the two major political parties, "get it"? We The People/tea party patriots have had enough of characterless career politicians who make self serving back door deals and govern against the will of the people. The Tea Party movement is birthing character and principle driven candidates across America. Christine O'Donnell is one such candidate. Go, Christine Go!

Before leaving Delaware and flying back home to Florida, I ate steamed crabs at Crabby's. I am originally a Baltimore boy. So, I know my steamed crabs. Crabby's did a great job!