September 28, 2010
I recently caught the last 5 minutes of "Rocky," the classic movie starring Sylvester Stallone. During the finale, Championship Boxing Exhibition, Rocky, the extreme underdog amateur, was knocked down several times by powerful punches from the reigning champion. Upon being knocked down yet again, Rocky's coach instructed, "Stay down!" 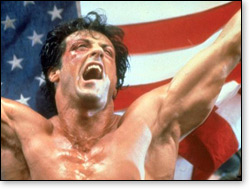 I thought, that is exactly what many family and friends, who love us, advise when the goin' gets tough: "Quit. Give up on your dream." Like such family and friends, Rocky's well intentioned coach did not get it. Instinctively, Rocky knew he had to get back up or never be able to look at himself in the mirror again. Even after seeing the scene for the ga-zillionth time, when Rocky struggles to his feet and battles the champion to the final bell, I still get a lump in my throat.

Rocky strikes a universal chord. I was in college when the movie was first released in the 70s. Several of my fellow black friends were militants running around touting "Black Power" with raised fists. And yet, they were crazy about the Italian Stallion, Rocky.

Rocky is universally loved because he tells us that no matter how much life beats you down, if you can find the strength to pick yourself back up, you are a winner. Rocky also tells us that certain things are worth fighting for; risking losing for the dream of winning. Rocky epitomized the American Spirit.

And then, along came the Obama administration. In fairness, while no other president has promoted entitlement and American un-exceptional-ism more than Obama, we have been traveling down this entitlement road for quite awhile.

Like Rocky's coach, but for sinister reasons, Obama and liberals advise Americans, "Stay down! Striving for personal success is evil. You're entitled to the fruit of the labor of someone else. Illegal immigration is fine. Enforcing the law is insensitive, heartless and racist. Competition damages self esteem. Capitalism is unfair. Expecting immigrants to learn English is cruel and racist. We expect very little of you" .

In keeping with their constant appealing to our lower nature and "don't strive for excellence" mindset, liberals coach minorities, "You're victims of American racism. You deserve handouts. America is controlled by rich white people." Much has been written about the Left's "bigotry of low expectations" in regards to minorities.

No longer do we celebrate the "Rockys" of America — folks who sacrifice, take risks and struggle to achieve a better life for their families and themselves. Obama and company demonize achievers, calling them selfish and greedy exploiters of the poor.

In the name of "social justice," King Obama has begun confiscating and redistributing the wealth of Americans who have been knocked down by life several times, but courageously kept struggling to pick themselves back up and became winners. Reading the biographies of the wealthy will confirm that most of them took risks and experienced failures; many faced bankruptcies, lost marriages, and tremendous sacrifices and struggles. But they kept getting back up.

Not only has Obama vowed to confiscate the wealth of these "American Rockys" — and in his own words, "spread it around" America, he intends to redistribute their hard earned money around the world.

Some say the American Dream is dead. Nobody wants to work hard to achieve a goal. They believe liberals have successfully divided Americans into various victimized groups, all believing they are entitled. These fatalists say far too many Americans would rather sit on their butts and wait for whatever entitlement crumbs the government throws their way.

I do not believe we have reached such an ugly un-Rocky/un-American critical mass. Traveling on the Tea Party Express, I have attend hundreds of tea parties across America. Rocky is alive and well in the hearts and minds of millions of tea party patriots who still celebrate ambition, courage and personal achievement. These folks are downright repulsed by the idea of government controlling outcomes, dictating who wins and who loses.

Yes, it will. No matter how many times the American spirit is knocked down, it always gets back up. Tea Party patriots have declared, "King Obama, you're dethroned! We're taking back America!" Adriannnnnn, I LOVE YOU!!!