November 7, 2010
The American Tea Party Movement is the biggest winner of Tuesday's election. Overwhelming victories by "We The People" candidates confirm the movement to be a powerful force forever changing the landscape of U.S. politics.

No longer will Democrats and Republicans get away with conspiring together to make back room deals, governing against the will of the people. The new battle cry of the Tea Party Movement is "hold their feet to the fire."

Sunday, October 31, day 13 of our two-week Tea Party Express IV national bus tour, I was extremely tired. Our team had been doing two to three rallies per day with hundreds of miles and hours riding on the bus in between. It was quite grueling. But, our TPX team/family of 27 patriots from across America gave each rally our all — energizing, encouraging and inspiring the crowds.

While only 15 days ago, it feels like a year ago that we held our launch rally in Reno, NV. Sarah Palin was our keynote speaker for that rally. Palin appearances are electric. Her impact on the audiences is amazing. The people love her.

In every city, we invited local conservative candidates and national patriots in the area to speak at our rallies — Pat Boone, Tammy Bruce, Andrew Breitbart, and Herman Cain, to name a few.

Over the past two weeks, the crowds across America were excited and eager to crawl over broken glass to vote against Obama's agenda. They were very, very thankful to Tea Party Express for our efforts.

In his incredible arrogance, assumption of superior intellect, and egomania, Barack Hussein Obama believes he can get away with telling the American people all is well despite facts proving otherwise. Like most liberals, Obama assumes the American people are stupid. They are not. The truth is quite the opposite. The American people sense the great crisis we face under Obama's regime.

Black conservative publishers and motivational speakers William and Selena Owens are members of our TPX team. Their youngest son, David, traveled with us on our last tour. David really enjoyed the unique adventurous experience of touring America. However, he was very excited and could hardly wait to enter military school at the end of that tour. That was six weeks ago.

On Sunday, next to the last day of our two week tour, David showed up in uniform at one of our New York rallies. David looked great — a foot taller, a huge smile on his face, handsome, a bright fine young man with a limitless bright future ahead of him. Only with six weeks in military school, David has received awards for excellence. Our entire TPX team/family felt proud and excited to see David; kind of like our son had come home.

Somehow David showing up at the end of our tour seemed prefect. His presence epitomized the purpose of our TPX team's very hard work — all the nights of very little sleep, all the dinners of pizza on the bus, the challenging weather from rain to extremely hot to freezing cold, close quarters, occasionally getting on one another's nerves, and all the vicious attacks by the bias liberal media who just don't get it. It was all for Davids across America, our kids and our grandkids.

Our TPX team is not unique in that regard. Millions of fellow patriots across our great land are fighting Obama to restore and preserve America for their children and grandchildren.

All of us on Tea Party Express IV are extremely grateful and honored to have played a major role in bringing the Peoples' candidates to the forefront. I feel extremely blessed to have been chosen to be a part of U.S. history. Wow, what an amazing time in which we live. God bless. 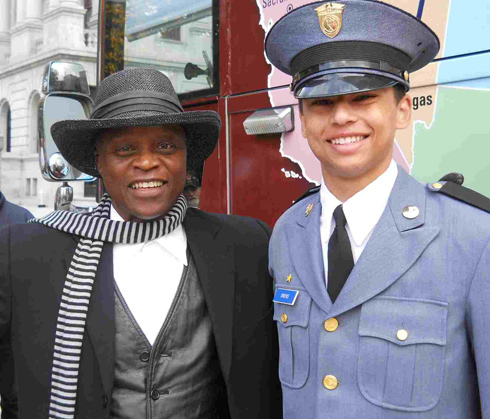