January 18, 2011
When I was a kid, my black dad spoke with what felt like admiration about Adam Clayton Powell, Jr. Powell was a handsome, articulate and powerful famed black minister and congressman. Despite adulterous affairs with women in his church, charges of financial misconduct and wild parties on his yacht, it was said that women joined Powell's church several times for the thrill of coming to the front of the congregation to shake his hand. 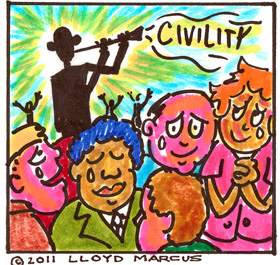 My dad has been the epitome of character all of my life. And yet, something about Powell's persona and ability to deliver a riveting sermon fascinated my dad. As a kid, given Powell's lack of character, I did not hold the smooth talking playboy minister in high regard.

Conservative intellectual's rave reviews of Obama's memorial speech for the Tucson shooting victims give me an insight into my dad's positive view of Powell.

Obama's speech struck me as more of the same; his masterful sleazy bait and switch talking from both sides of his mouth. In a nut shell, while saying the shooting had nothing to do with politics, Obama lectured Americans about the need for more civility in political speech.

When Obama said we need to tone down our language for Christina Green, the little girl who was killed in the shooting, it turned my stomach; how exploitative and manipulative- so typically democrat. It felt like a moment from the liberal democrat Senator Paul Wellstone Memorial, another memorial which the democrats exploited for political gain. "Do it for Paul! Do it for Paul!"

So when conservative guru Dr. Charles Krauthammer and the Fox News team gave Obama almost tearful rave reviews for his brilliant speech, I thought, "Am I crazy?"

Then, I realized, like my dad, Krauthammer and the Fox team are intellectuals. They "get off" on appearances and sounding "smart." I'm just a regular guy who puts stock into who a person really is — people who say what they mean, mean what they say, and do it.

Listening to Obama's speech, all I heard was a despicable man exploiting the event to silence opposition to his destruction of America as we know it.

Frankly, I am proud to be named among We The People, tea party patriots, rather than the political elites on both sides of the isle. We have had enough of putting pretty smooth talking scoundrels in political office who betray us. I'll take character over eloquent oratory, any day.