Lloyd Marcus
Obamacare un-constitutional, so what? Gimme the freebies!

February 2, 2011
A Florida judge rightly ruled that Obamacare is un-Constitutional on the grounds that the federal government cannot force an American citizen to purchase anything. All who understand, honor, cherish and respect individual freedom are elated by the judge's ruling; a major step toward repealing Obama's tyrannous manifesto. 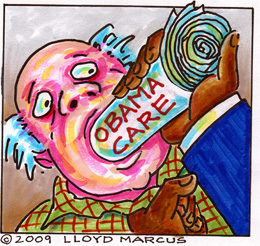 In the Bible, Esau traded his birthright, a very important and sacred thing, for a bowl of beans. What I find extremely disturbing is the "seemingly" large number of Americans who, without the slightest reservation, would gladly traded their God given birthright of freedom for the perceived freebie of government run health care. News flash, nothing in life is free including Obamacare.

Hidden in the 2300 page Obamacare bill are unprecedented government controls and repeals of our freedom. Some supporters will be outraged and reject Obamacare upon learning the truth.

But, as I said, I am concerned about the idiots who could not care less about the loss of freedom. "As long as I am getting a free ride and the rich are being punished, I'm happy. Now, that's social justice" is their belief.

Who are these guys; uninspired by rugged individualism, non lovers of freedom, courage, risk taking and all that has made America great? Where are they being manufactured?

The left has seized the education of our kids from kindergarten through college; distorting and/or simply not teaching the enormous price America has paid for freedom. Disgracefully, many of our youths consider their individual freedom to be no more valuable than a bowl of beans.

In his 1989 farewell speech, President Ronald Reagan saw and warned of the growing trend toward non patriotism and disrespect for freedom. http://www.youtube.com/watch?v=u9Z-nN1YB5A

In schools across America, liberals continue to infect the minds of our children with the virus of anti-Americanism while indoctrinating them with their secular progressive agenda. Decades of the Left's stealth warfare against America via public education has created an epidemic of apathy about freedom, entitlement mindsets and a warped value system where government controlled outcomes equal fairness.

As tea party patriots, it is our duty to inoculate our children with the truth about America which is the antidote to the anti-Americanism virus.

The vaccine of truth about America will birth a new sense of proud in the hearts and minds of our children about their country, this extraordinary experiment called America. Another by product will be gratitude, honor and respect for those who paid the ultimate sacrifice to preserve our God given priceless gift of freedom.

While taking back America, we must take back our children.