March 4, 2011
Just when we think the liberal media's hypocrisy could not be more blatant, they kick it to the next level. They have obviously abandoned any pretense of fair and honest reporting. 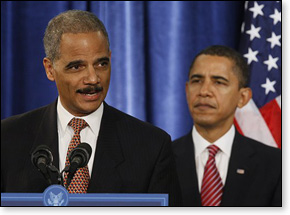 OK, we get it. Their template is "Conservatives suck, kill them "politically." Minorities are "angels," victims of a racist America controlled by rich white guys. Folks, if you understand this mindset, you understand the liberal media's coverage of the Tea Party and their blatant ignoring of racism coming from the Left.

And let me just say this. Not only does the liberal media and the Left ignore black racism, they encourage it. I'm black. The Left verbally beats me up all the time for not resenting America and for not even harboring a low level hatred of whites. They diagnose us black conservatives with having Stockholm Syndrome.

I know I should not be surprised, but I am stunned by the latest example of the liberal media, for the most part, ignoring a huge story about racism because the perpetrator is black.

Attorney General, Eric Holder, basically admitted he is not the attorney general of "all" Americans. Holder gives blacks special preference. Wow, we blacks have a "homey" in the White House.

Holder went on to explain that the suffering of African Americans seeking the right to vote in the South in the 60s far surpasses the intimidation white voters recently endured in Philadelphia. So much for any pretense of Obama dispensing equal justice to all Americans. Folks, we're talkin' Affirmative Action justice.

Can you imagine what would happen to a white politician using the term, "my people"? A visual of a white guy covered in tar and feathers running for his life appeared in my mind.

Folks, the Attorney General of the United States said he is not going to pursue certain criminal charges against blacks because of past racism in America. And the liberal media, for the most part, says hoe hum, no problem.

I have been a voice crying in the wilderness about this for years. Racism is evil. So, why is racism when perpetrated by blacks acceptable and even applauded? On HBO's Def Comedy Jam TV show, black comedians trashing white America was a staple. Had a white comic told just one of the same jokes inserting the word "black," the insensitive white racist SOB comic's career would be over.

A sycophant liberal media giving black racist comedians a pass is of little consequence. But, when the liberal media gives the black Attorney General of the United States a pass for his racism, Houston we have a serious problem.

We the People are challenged by insidious enemies within; a racially bias Obama administration and liberal media; both hellbent on "fundamentally transforming America" with the implementation of their progressive/socialist agenda. They MUST be defeated.

As Vice Chair of The Campaign to Defeat Obama in 2012, I sincerely covet your support.

We are gathering "One Million People To Defeat Barack Obama 2012." Please join us!