March 30, 2011
Hi Patriots. I just returned home to Florida from San Francisco where I emceed a fund raiser for the "Campaign To Defeat Barack Obama in 2012." I am also a Vice Chair. 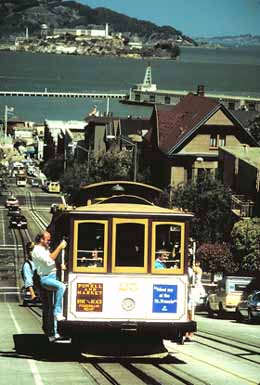 I tried to tune in Rush on the radio in my room. The signal was extremely weak with so much static only a truly commitment ditto-head would hang in there to listen.

And then, on my bed was a 3x5 plastic card with the following text:

Help us in our efforts to reduce water and energy consumption as well as detergent wastewater.

If you are staying more than one night and would like your sheets changed, please leave this card on the bed.

Somehow that silly card epitomized my trip to San Francisco up to that point. . I thought, with no Fox News, no Rush and very few strong conservative voices, no wonder these people out here are living in Liberal La La Land.

I realize I am exaggerating a bit, but what that silly card said to me is... "Look, we're trying to save the planet. But if you are a selfish SOB, probably one of those sexist, racist, homophobic tea party fanatics, who want to sleep on a clean sheet, OK we will accommodate you."

Call me crazy, but I do not believe the fate of the earth rests on me sleeping on dirty sheets.

The evening fund-raiser was a breath of fresh patriotic conservative air. It was held at a breathtakingly beautiful estate. Capitalism and entrepreneur-ism are alive and well in California. Praise God.

However, King Obama is giving them hell. At dinner, I chatted with a gentleman who was forced to sell his chain of tanning salons because of Obama's tanning tax.

Our featured guest speakers were Joe Miller, Joe the Plumber and Sheriff Joe. R. Pyle. The mood of the guests at the event was upbeat and enthusiastically committed to ending King Obama's reign of terror in 2012.

I met a woman who has organized a group to fight voter fraud which is an extremely serious problem.

A big guy originally from Texas was there with his lovely wife. She began writing letters to the editor and articles. Five years ago, he encouraged her to launch her own conservative talk radio show. Her show is popular. Lord knows she is needed out there. The Alana Burke Show. www.Kcnr1460.com

Most impressive was a feisty conservative Asian college student. Her boyfriend said she is hated and called a racist by her fellow students. However, this bold confident beautiful young lady does not seem to care. She simply smiles and uses facts to kick liberal student's butts in debates. It is always great to meet smart youths with backbone who refuse to join their fellow students in drinking the Obama Kool-Aid.

During the event, several conversations centered around California's insane hostility to business, rolling out the red carpet for illegals and unsustainable out of control entitlement spending. California's budget deficit is over 25 billion dollars and growing.

Folks, our fellow patriots out there in California are doing the Lord's work. I salute them.

Oh, and by the way, the morning fog does chill the air.