April 8, 2011
I've gotten defeatist emails from patriots who basically say, "It is hopeless. America's system of government is totally corrupt, broken beyond repair. Both sides, Republican and Democrat, suck. We are no longer a Christian nation. Mr. Marcus you are wasting your time naively thinking your "tea partying" across America will make a difference." 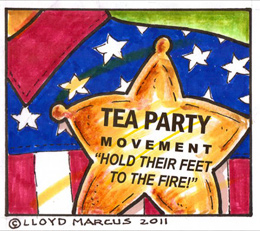 Quoting one of my dad's favorite idioms from when I was a kid, I say, "Good grief." Patriots, lighten up. Yes, we are fighting deep-rooted corruption, an extremely well funded socialist/progressive agenda, a relentless liberal biased media, and a powerful, lawless, and evil Obama administration.

Do we simply give up? Do we surrender America? Do we turn off America's lights and move elsewhere? Heck No! Our country, your country, and my country is worth fighting for!

Call me a Christian nut, but I believe right and God are on our side. The Bible talks about evil appearing strong spreading itself like a huge oak tree. Think of the Left as a huge evil tree. While its branches appear massive and powerful with thick foliage, its roots are shallowly buried in hatred and lies.

Righteousness and truth are much more powerful than evil. Ultimately the weight of the Left's evil will cause them to fail. "They stumbled and fell," says the Bible, referring to evil men attempting to implement their agenda.

Still, we must remain positive, strong, and vigilant in our battle for America. Support our Tea Party candidates as they fight for our values and principles. DC is a cold and lonely place for "true conservatives." So, our newly elected tea party officials truly need our support.

Back at home, it is extremely critical that every patriot continues to use their passion, gifts, and talents in this war to save America as we know and love it.

The Tea Party movement is also about no longer kowtowing to political correctness. For some of us, this also includes repealing the Left's banning of God in the public square.

As I stated, we're the good guys. You doom and gloom defeatists, STOP IT! We're gonna win! Smile! Now, get out there and continue politically kicking liberal butt.