June 4, 2011
I'm sorry guys. Every time you flood me with emails attempting to convince me Palin cannot win — is too toxic, not smart enough, a hypocrite, and is only in it for the money, the courageous woman boldly does another extraordinary interview that makes me stand up and cheer, "Sarah Palin, you go girl! I love you!" 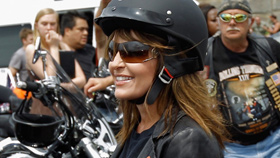 On the Hannity show, Palin launched another "in your face" attack on Obama, the GOP, and the liberal media. I LOVE IT! http://fxn.ws/cxt8dv

Nothing frustrates me more than GOP candidates walking on eggs, cautious not to offend or anger the despicable, lying, agenda-driven, and evil liberal media. Why should we show respect for characterless people who are committed to lying and putting a negative spin on everything we say and do? The liberal media's mission is to politically "kill" the tea party. Get it?

Sarah Palin gets it. Palin does not give a rat's behind about what the liberal media thinks of her.

On numerous occasions, without the slightest hint of reservation or FEAR, Palin has attacked Obama "the man" — his lies, his anti-American associations, his socialist agenda, his assault on our freedom, liberty, and culture, and his horrific record, thus far. Thank you, Sarah Palin! God bless you!

I realize I sound like a broken record, but I cannot express the following point strongly enough. To beat Obama and "his media" in 2012, our candidate MUST embrace Palin's aggressive, fearless battle plan.

It has been said, only a fool brings a knife to a gunfight. Without restraint or mercy, Obama, the Democrats, and Obama's liberal media gang will show up at the 2012 DC fight for the White House with mega guns firing at the tea party and the Republican presidential candidate.

Any Republican presidential candidate who is timid due to the historical context of Obama's presidency saying, "God bless Obama's heart. He meant well, but his policies have failed," is like entering this crucial battle for our country with a butter knife. Such a restrained effort would insure political death to our side and the end of America as we know it.

Patriots, we need a fearless political gunslinging hero. And so far, our heroic pistol-packin' mama is Sarah Palin.