June 5, 2011
Without beating around the bush, I believe the battle being fought in America today goes beyond politics; right vs left. It is a spiritual battle; good vs evil.

"For we wrestle not against flesh and blood, but against principalities, against powers, against the rulers of the darkness of this world, against spiritual wickedness in high places."
Ephesians 6:12 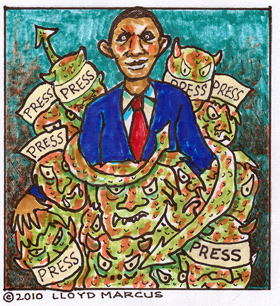 The mindset of the American left is a spirit of Antichrist which is man making himself God.

Before writing me off as a Bible nut, please hear me out. Understanding this reality will explain much of the left's behavior. Because they believe man is God, in their insane arrogance, the left think they can fix everything; legislate equal outcomes and even save or destroy the planet.

Make no mistake about it folks, we are in a spiritual battle. Ask yourself. Specifically, what about Sarah Palin inspires such visceral hatred from the left? The word is "wholesome."

For the most part, Palin promotes love for God, family and country. She is passionately determined to thwart Obama's plan to "fundamentally transform America."

While realizing Palin is human and does not walk on water, Palin epitomizes heartland principles and values embraced by most Americans. Thus, we are Palin and Palin is us.

For these reasons, Palin and tea party are as repulsive to liberals as showing Dracula the cross.

There is definitely an anti-wholesome, anti-goodness vibe coming out of Hollywood. Hollywood leftists are vehemently anti death penalty. They rally around convicted murderers. They think anyone harming a puppy should be beaten within any inch of their life. These Hollywood libs pride themselves as being Lords of Compassion and Tolerance.

And yet, these same libs have a cow whenever someone merely suggests to a woman that she think twice before aborting her baby. Tell me there "ain't" something spiritually wrong with such a mindset.

Because liberal elitists think man is God, they assume moral authority to confiscate as much control over our lives we simple minded god fearing peons will allow, including procreation.

I picked up a government funded brochure at my local library which basically said birthing babies is an irresponsible abuse of the planet.

Folks, this is leftist control freak hogwash! The seven billion people who live on the planet could fit in Texas enjoying about the same amount of living space as residents of New York.

God said be fruitful and multiply. But then, what the heck does God know?

In her book, "Godless," Ann Coulter said, "If a Martian landed in America and set out to determine the nation's official state religion, he would have to conclude it is Liberalism, while Christianity and Judaism are prohibited by law."

I concur with Ms Coulter. The mainstream media is controlled by zealots of Liberalism who I believe are driven by a spirit of Antichrist; man is God. Thus, only man can and will fix everything.

Why does the left aggressively demand that we show utmost respect for every religion under the sun except Christianity? Remember when libs Whoopi Goldberg and Joy Behar stormed off the set of The View TV program when they concluded Bill O'Reilly dissed Muslims?

And yet, Rosie O'Donnell outrageously stated "Radical Christianity is just as threatening as radical Islam in a country like America." Not one peep of disagreement or disapproval from the left.

Unquestionably, these women have issues with America and Christians; a spirit of Antichrist. At the center of Christianity is a divine Jesus. If Jesus is God, the left is not.

Even our most liberal president ever, Obama, dissed heartland Americans for "bitterly clinging to their god and guns." Would a true Christian berate folks for finding security in trusting God?

Like an episode of Star Trek, the left believes universal peace can be achieved via America apologizing and admitting to the world that "we suck," surrendering our power, signing treaties and singing a few verses of "Kumbaya."

They believe the greatest source of evil in the world is warmongering Christian white guys like George Bush. If only Bush had, "Given peace a chance".

Liberals always cater to man's lowest base instincts. They hate standards for behavior, labeling all rebuke of bad behavior as being intolerant and judgmental. And yet, they believe without divine influence, man is capable of someday achieving universal peace. Totally absurd.

Christians believe that though we strive to do the right thing, the heart of man is critically flawed which is why we were in need of a savior, Jesus Christ.

Obama's promise to "fundamentally transform America" is a spiritual attack on our freedom, liberty and culture.

Despite the left's relentless attempts to ban God from America's public square, the emergence and power of the tea party tells me God is still on our side.

Mr. Obama, though your liberal zealots perceive you to be "the messiah," God is still on the throne. Come November 2012, you're fired!