June 7, 2011
What part of "the Paul Ryan Budget Proposal does not affect the Medicare of seniors 55 and older" do democrats and the liberal media not understand? Why would the democrats produce a blatantly lying video ad showing Congressman Ryan pushing granny over a cliff and why would the liberal media allow them to get away with it? http://bit.ly/jJKdFw 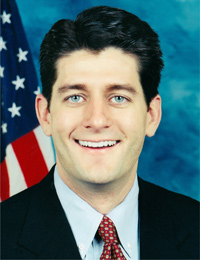 Are the democrats and their lib media buddies intellectually challenged and unable to grasp the concept of "does not"? No, they are co-conspirators in their despicable mission to manipulate, terrify and deceive seniors.

Their distortion of Ryan's Medicare proposal is an example of the evil, democrat/liberal media tag team, juggernaut which challenges us in the 2012 election.

We can not allow these shameless liars to successfully brand Ryan's heroic effort to "SAVE" Medicare as a republican plot to end Medicare and "kill" seniors. Former Obama adviser and far left radical, Van Jones, even compared Ryan's budget to an attack by Al-Qaeda. http://bit.ly/lfEty9

Such over the top fear tactics and lies work when not refuted.

Patriots, it is going to take a "all hands on deck" herculean effort on our part to spread the truth about Ryan's plan, countering the Obama machine's liberal media supported lies.

Use your creativity. Shoot and post videos. Gather patriots on street corners and in parks; all chanting the same mantra, "The dems lie! Ryan's budget does not affect the Medicare of seniors 55 and older."

The bazaar-o world aspect of the Medicare debate is while dems and liberal media attack Ryan, Obama is the one planning to cut 500 billion dollars from Medicare which is repealed in Ryan's plan. Ryan's proposal also repeals Obama's death panels.

My 99 year old black grandmother adores Obama. Little does she know Obama's health rationing panels would deem her a poor investment for certain medical procedures. I envision my grandmother's application rubber stamped, "DENIED" and a federal clerk yelling, "Next!"

Everybody knows Medicare is on the road to bankruptcy. So, why would the democrats set out to destroy, portraying Paul Ryan as the devil's advocate, the one guy making a sincere effort to save Medicare for future generations?

Allow me to offer a lesson in Democrat Compassion 101. It is NEVER about real compassion. It is ALWAYS about superior, "we know best how to run your life" power and control.

In a candid moment, Obama admitted that while it may take 10 years, his ultimate goal is to have all Americans on government run health care. Thus, Medicare failing would be a good thing, a major step toward Obama achieving his goal. It would open the door to Americans embracing government controlled health care which equals surrendering total control of our lives.

Government will decide who lives and who dies, what we eat, what time we go to bed and whether or not you can own a gun. Don't laugh. Gun control was embedded in Hilliary Care.

Last November, we patriots made a promise to our winning tea party candidates. We said, "If you guys go to Washington and hold fast to the reasons we sent you there, WE WILL HAVE YOUR BACKS!"

Congressman Ryan believed us. This brilliant courageous young man stepped up to make "real change." Ryan's proposal takes on balancing the budget and stopping the bleeding of our economy caused by out of control entitlement and irresponsible spending.

Like a scene out of pro wrestling, the tag team of Mad Dog Lying Democrats and Suck Up Big Liberal Media began attacking Paul Ryan from all sides, ignoring all rules of fair play.

We MUST come to Ryan's defense. Patriot writers, singer/songwriters, bloggers, talk show hosts and etc.; we all must do our part to get the word out. Time to go Paul Revere on the democrat's and liberal media's behinds. "The dems lie! Ryan's budget does not affect the Medicare of seniors 55 and older."

Though quite formidable, we beat the democrats and Obama's media last November which proves we can beat them again come November 2012.