July 16, 2011
Despite an unprecedented 39% of Americans believing our country is in permanent decline and Obama's approval rating down in the 40's, Obama still owns "the black vote." 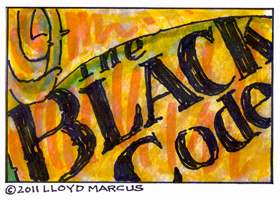 Black America's passionate adulation for Obama was so intense I expected them to sing Hosanna in worship of their messiah. I felt like a little kid timidly raising his hand from the back of a classroom. 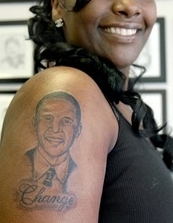 "E-E-Excuse me. Has anyone even considered who Obama is as a person and what he will do as president?"

According to the TV program, Obama is great for America solely because he is "African American." The program producer's neglect of mentioning Obama's agenda leaves me to conclude they thought it irrelevant.

I questioned. Why are my thought processes so different than most of my fellow black Americans? Why did I choose to look a bit deeper into the content of Obama's character rather than my critique of the man stopping at his skin color.

The answer. I am not submissive to "The Black Code." Most blacks grow up adhering to an unspoken subliminally understood, Black Code.

What I am about to say most children instinctively know, and yet, it is a concept extremely difficult for many adults to grasp. Good people and bad people come in ALL colors. Thus, it is wise to judge every human being as an individual.

The Obama Effect has been amazing, baffling and frustrating. Why do many of my intelligent black family members, friends and associates bow in worship of this man even though most of his policies clash with their Christian faith, principles and values?

Then, it dawned on me. The Black Code.

In loyalty to The Black Code, many educated entrepreneurial blacks turned off their brains choosing to ignore Obama's destruction of their country. Then there are other black Obama supporters who are fellow social justice zealots and loyal to The Black Code.

Al Sharpton and the usual suspects along with their sycophant clueless puppy dog white liberal media exploit The Black Code at every opportunity.

Exploitation of The Black Code is the left's strategy to defeat the tea party and get out the black vote in 2012. Their think tank went something like this. "I got it! Let's call the tea party racist. We'll accuse them of opposing Obama's race rather than his agenda to fundamentally transform America. Instinctively, blacks will flock to the polls in defense of their brother against those white tea party rednecks."

Johnny Cochran brilliantly exploited The Black Code in the OJ trial. Cochran proved himself to be a master of misdirection on the level of Houdini. He made the original focus of the trial, a husband practically beheading his wife and mother of his children, disappear. Magically, the OJ trial became about America's original sin of slavery, the mistreatment of blacks over the years and Affirmative Action justice.

Cochran had blacks so fired up and united against white America, they forgave OJ's extreme violation of The Black Code. Not only did OJ have too many white friends, he even married a white woman. Still, black America embraced OJ as one of theirs and they were not going to let white America punish him.

This is why OJ's "not guilty" verdict sparked a roar of black rejoicing heard around the world.

Black America's jubilation over the verdict left me disappointed with several of my respected black family and friends. I found myself alone in my disapproval thinking, "I don't get it. Why are they celebrating a man getting away with brutally murdering his wife?"

The emergence of Obama as America's first black presidential candidate automatically activated The Black Code in the hearts and minds of most black Americans. Obama's socialistic ideas, anti America associations and friends were irrelevant. Once again, I found myself odd man out with family and black friends.

Consequences for violating The Black Code are severe. I boldly proclaim myself to be an unhyphenated American rather than the politically correct term, "African-American." It never occurred to me my statement would be seen as a violation of The Black Code.

Folks, you would be stunned by the level of hatred, including a death threat, I have received from fellow blacks for simply calling myself an "American".

Forces demanding loyalty to The Black Code are extremely powerful, intimidating and potentially dangerous. Black racist minster Rev. Wright scolded blacks not submissive to The Black Code saying, "I am tired of Negroes who just don't get it!"

I am a Christian. My loyalty to righteousness and truth trumps intimidation and any deep seeded loyalty to skin color.

Obama's social justice agenda is evil and toxic to freedom, liberty and America. I will keep praying for God's guidance as how to inspire my fellow black Americans to liberate themselves from The Black Code; removing the scales from their eyes allowing them to see and embrace the truth.

I am confident come November 2012, Barack Hussein Obama will not receive 96% of the black vote.