July 29, 2011
Some of you side with the establishment Republicans: "Let's compromise with the Democrats regarding raising the debt ceiling. Then the media cannot blame us for causing a government shutdown." 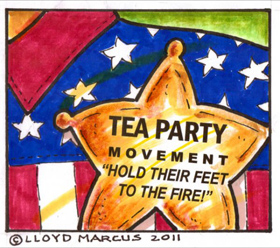 I side with the Tea Party: "Why surrender to Obama, Reed, and company? The media is going to portray us as mean-spirited, heartless Republicans no matter what we do. So, let's stand on principle and do what is best for America."

I think back to seventh grade, waiting for our school bus with Butterball and Zaggy. Butterball was a big kid and very gentle. Zaggy was smaller, but very mean and aggressive – a bully. Zaggy would slap Butterball in the face and punch him almost every morning. Zaggy's mood would determine how severe a beating Butterball would endure.

Butterball would only attempt to block punches and beg to be left alone. I was a little kid. And yet, I thought, "Butterball, you are getting beat up ANYWAY, so why not hit Zaggy back."

I am witnessing the same scenario: the left vs the Republicans. The left (Democrats and their media) is going to trash the Republicans whether they compromise or not. I say to the Republicans, "You're getting beat up ANYWAY, so why not stand up for fiscal responsibility and Conservatism?"

Forgive me for using this cliché, but it is appropriate. Insanity is doing the same thing over and over again expecting a different result. The Democrats and their media loath Republicans and Conservatism.

Speaker Boehner, why keep crafting budget plans hoping Republicans will be given a fair shake in the media and awarded kudos for compromise? YOU WILL NOT! Whatever Republicans do will be spun negatively. Pure and simple. End of subject.

I am also weary of hearing how Obama, the Democrats, and their media are unbeatable in the battle for public opinion. If the Democrats' and media's influence over what the public believes is so powerful, why was Obama and company so severely beaten last November?

I do not know what snapped in Butterball's brain, but one morning when Zaggy slapped him, Butterball unloaded on him. Zaggy cried. All of us kids laughed and cheered for Butterball.

It truly sticks in my craw seeing characterless, self-serving scoundrels dictating the rules of engagement and getting their way. It goes against everything I believe. Right is more powerful than wrong and is supposed to win!