October 20, 2011
I keep having images of Herman Cain barefoot, covered in sweat and mud, wearing an old patchwork shirt and hand-made burlap pants held up by a rope rather than a belt, out of breath and frantically running for his life — to freedom. Menacing sounds of barking dogs in the distance focus on Cain's scent. Not far behind, hot on Cain's trail, are black overseers determined to keep their fellow black slaves in check for their white liberal Democrat massas. 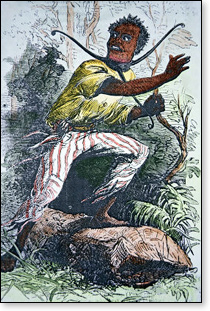 Cain's crime? He achieved success via traditional routes: education, hard work, and character. Cain did not use or need Affirmative Action or lowered standards — a clear violation of the left's law for acceptable minority success.

So a posse of black overseers consisting of Harry Belafonte, Tavis Smiley, Morgan Freeman, Al Sharpton, and other blacks who are loyal to their white liberal Democrat massas are on a mission to destroy runaway slave Herman Cain.

Why has the left launched a stop-at-all-cost political hit on Herman Cain? The answer is quite simple. Herman Cain represents truth. Truth can be devastating, such as the great Oz is only a man behind a curtain pulling levers, Soylent Green is people, and the greatest enemy of black Americans is the Democratic Party.

Cain was correct in saying black voters have been brainwashed by the Democrats. Black overseers have kept blacks obediently and mindlessly monolithically voting Democrat for years despite huge elephants in the black community's living room: over 70% black high school dropout rate, over 70% black out of wedlock births, and unprecedented black unemployment under Obama.

Black overseers and liberal white Democrats do not want to see a character-driven black in the Oval office who will not exploit his race to further a socialistic agenda. They do not want a black Commander-in-Chief whose life confirms the limitless opportunities for success available to all Americans who choose to "go for it." The last thing in the world the left wants to see is a black president who does not think more government control is the solution to every problem. They also do not want a powerful black voice celebrating America, rather than proclaiming America to be the greatest source of evil on the planet. A black leader who loves and stands up for America, individual rights, and freedom petrifies the left.

Obama uses his skin color to insulate himself from criticism as he usurps authority like no other president before him. All opposition to Obama's hostile takeovers is branded racist. Obama preaches his gospel of entitlement: everyone is a victim and everyone is entitled to the fruit of someone else's labor. Again, anyone daring to disagree with Obama's sermons is declared heartless and racist.

As president, Herman Cain would be the left's worst nightmare. Cain would be historic, not as the first black president, but as the first black "leader" to occupy the Oval Office. Cain's Justice Department would distribute equal justice to all Americans regardless of skin color — unlike the Obama Justice Department, who said they would not press charges against fellow blacks.

President Cain would be a true celebration of all that has made America great: education, hard work, individuality, character, religious faith, and freedom. Such wholesome virtues are deemed corny and repulsive to the left, who are typically spoiled- brat former hippie rich white kids.

And for this reason, black overseers and liberal white Democrats must capture, hogtie and drag Cain's black "n----- a--" back to the liberal Democrat plantation where he belongs.