December 28, 2011
I would not blame Herman Cain if he said, Lloyd, I know you mean well brother. However, the relentless vitriolic media attacks against me have finally subsided since I dropped out of the presidential race. My family and I are finally having some peace. So, why on earth would you bring up my name again? 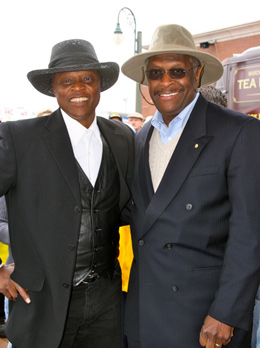 Well, in a nut shell, I just did not like the way the whole "Cain Thing" went down. Also, we live in a fast paced news cycle, carelessly nuke a person's life and in two days everyone has moved on, disposable world. Herman Cain's courageous bid to serve his country deserves more than, "Cain, wasn't he the black dude sex fanatic who ran for president as a Republican?"

OK, Cain is gone and we conservatives must focus on selecting our candidate to defeat Obama in 2012. I got it. But, it breaks my heart seeing what happened to this "good man." Cain was attacked from both sides of the aisle. A few conservative pundits even accused Cain of not seriously seeking the Oval Office, but simply seeking self-promotion.

Please do not get me wrong. I realize playing with the big boys in the national arena is tough. I just did not realize how much tougher and blatantly unfair it is for conservatives. As a conservative seeking to win the Republican presidential nomination, Cain endured a deep rectal vetting not even required of our current president. As a matter of fact, we still know very little about Obama's history.

Obama is a liberal. Thus, the liberal media deems probing Obama's history, associations and even using his middle name to be racist.

As a black conservative myself, I was excited about black America meeting Herman Cain — a brilliant black businessman who loves God and country. Cain's message was a refreshing breath of fresh air; a striking contrast to the absurd victim/entitlement minded garbage coming out of the mouths of too many successful rich blacks who say — Yes, we are multimillionaires, but America is still racist, sucks and owes us.

Unfortunately, here is how this great black role model was introduced to much of black America. My 84 year old dad phoned me, "Do you know this Herman McCain who is involved in all these sex scandals?" I replied, "His name is Herman Cain, dad." I then proceeded to tell my dad about the great man I know.

Think about this folks, Cain's candidacy and reputation, in the minds of many, was destroyed by unproven "he said, she said" allegations. Please do not come back at me arguing about whether or not Cain was qualified for the office. I am not talking about that. I am talking about the no-holds-barred, nothing-is-off-limits or over-the-top relentless campaign to destroy this decent man.

Good Lord, the allegations went from "possible" sexual gestures to Cain supposedly forcibly reaching under a woman's skirt. Since Cain has dropped out of the race, all of his accusers are gone. Imagine that.

Something has gone terribly wrong in our country folks. Meanwhile, the mainstream liberal media are deaf, dumb and blind regarding all of the huge elephants in America's living room unfavorable to Obama. Why? Because Obama is their rare Teflon ticket to making all of their progressive, anti-America and socialistic dreams come true.

While I "feel" for brother Cain, I am fully confident Herman Cain will be OK. Remember, Cain beat cancer. Using his faith, character and infectious optimism, Cain will find a way to make extraordinary lemonade using the Left's lemons (their evil attacks against him).

Wow, I may have just come up with a brilliant Capitalistic, sorry Occupiers, entrepreneurial marketing idea. Famous Amos sells his cookies, Rush Limbaugh sells his tea; how about Herman Cain Lemonade?

Brother Cain, I just want to say one more time how much millions of us truly appreciated and thank you for stepping up to save our great country. You led the pack for a reason, your business sense, optimism, character and love for America. You and your family remain in our prayers.

Another reason I know Cain will be OK is because referring to Christians, the Bible says, "No weapon formed against us shall prosper."

I am sure the Left, Obama administration and the liberal media were dancing to the classic Martha Reeves and the Vandellas hit song, "Dancing In the Street," the day Cain withdrew from the race. But mark my words, God "ain't" done with Herman Cain. Not only will his extraordinary life and story continue to positively impact millions, his success will reach unprecedented levels.

Take that you arrogant godless left-wingers. Lemonade anyone?