September 3, 2012
OK, so I am watching a CNN panel discussion about Romney's acceptance speech. Christine O'Donnell was on the panel. The CNN host said that Romney's speech and our side was, in essence, calling the Democrats communist. O'Donnell explained that we are not calling them communist, but simply 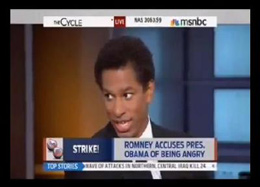 pointing out the differences in our vision of America verses the Democrats. Once again, an Obama media operative was attempting to spin/distort our words to portray Republicans/Conservatives as being extreme.

Like many blacks, I have high blood pressure issues. Thus, I can not allow these people to get to me.

Still, I could not believe that CNN chose Donna Brazile to be an on-set daily contributor to their Republican National Convention coverage. Give me a break! This black woman is a viscous hate-filled Democrat hack. Nothing coming out of her mouth is going to be fair, balanced or reasonable. But, I counted to ten and felt a little better.

Then, there was the Obama minion on an ABC webcast who said referring to the Romneys, "Happy to have a party when black people drown." Thank God, this arrogant stupid liberal jerk was immediately fired; in my option, not for his comment, but for getting caught on a live microphone. http://www.breitbart.com/Big-Journalism/2012/08/29/Shock-ABC-News-Romneys-Party-As-Black-People-Die

Folks, please forgive my passion. I do not like calling people "arrogant stupid liberal jerks." But, their smugness in their evil erroneous assumptions raises my blood pressure.

Reagan said, "Well, the trouble with our liberal friends is not that they're ignorant; it's just that they know so much that isn't so." http://www.hark.com/clips/dlvxhnstwz-the-trouble-with-our-liberal-friends

A wacko black journalist on MSNBC alleged that the Romney Campaign was "using coded language in order to "n----rize" President Obama." http://www.blackyouthproject.com/2012/08/msnbcs-toure-romney-is-trying-to-niggerize-obama-campaign/ Have you heard ANY media outrage about Toure's insane, divisive, hate and potentially violence inspiring statement? I think not.

This is the same mainstream media that said nothing when Congressional Black Caucus members proclaimed, "the tea party can go to hell" and "the tea party wants to see blacks hanging from a tree". VP Biden said to a majority black audience, "Republicans want to put y'all back in chains."

Has the MSM rebuked any of the Democrats' absurd, hate-filled and over-the-top rhetoric? No. Meanwhile, for four years the MSM has distorted the truth, lied and done everything humanly possible to brand an "R" for racist on the forehead of the Tea Party. These people are EVIL!

A few years ago, black Democrat liberal racist Julianne Malveaux offered her modus operandi for the speedy death of black conservative Justice Clarence Thomas. Malveaux suggested having Thomas' wife feed him bacon and eggs everyday for breakfast. The media's response to Malveaux's death-wish for a U.S. Supreme Court Justice was silence. Can you imagine the media outrage and frenzy had a white Republican/Conservative made such a statement?

Well, Ms Malveaux and Obama media minions, I am tweaking my diet, going to the gym and keeping my blood pressure in check.

Gov. Scott Walker's victory and the 2010 Tea Party landslide victory proves that your Evil-Empire dominance in the media can be beaten. Informed activist voters and black conservatives, like me, are your worst nightmare. And, with God's grace, I plan to live a very, very long time.