March 5, 2013
My late momma taught my siblings and I to never put family business in the street. However, my Tea Party family must deal with this issue if we are to accomplish our mission to halt Obama's tyranny and transformation of America into his socialist/progressive dream. The issue of which I speak is unity. 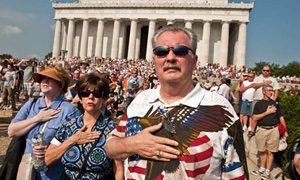 Early in our Tea Party movement four years ago, I was shocked to encounter turf wars and various selfish agendas. The people, the patriots who invest time and money for the movement, are not the problem. I am talking about some in leadership positions.

A major Tea Party website banned me from posting because I mentioned another Tea Party group. I thought, aren't we all on the same team? I quickly learned that we were not. Some opportunists joined the Tea Party simply because it was the hot new thing.

Then there are the single issue folks. If your Tea Party group does not channel all of it's efforts to the issue of which I am most passionate, I quit!

Let us not forget the doom and gloom folks. Their emails are as followed, "Lloyd you are an idiot for even trying to make a difference. Both parties are hopelessly corrupt." No one, I repeat, no one can foresee the future well enough to be completely fatalistic. Numerous times in my life, when all hope appeared to be lost, God intervened. Thus, I have learned to move forward always attempting to do the right thing and deliver my best at whatever God has put in front of me to do.

Round one of the battle to restore America is over – Socialism won via Obama's reelection. As we enter round two, it is more crucial than ever that we put aside pettiness and selfishness. We must come together to save the greatest nation on the planet. Am I talking about sacrificing core beliefs? Absolutely not.

Patriots, there will always be issues on which we disagree. Such is human nature. Someone said if you find a perfect church, please do not join it because you will mess it up. I am simply asking that we be more diligent in finding common ground – areas in which we do agree and work together for the greater good.

Obama and company are destroying our country folks. America can not survive with us fighting about who gets to sit on the front row.

Please do not think that I am being Mr High & Mighty preaching to you. In my youth, I made the mistake of making certain situations about me resulting in embarrassing consequences. When you come to a situation thinking, how can I help, and how can I make a positive difference, good things happen for all involved.

Brothers and sisters, the battle is much, much bigger than us. America, freedom and liberty are at stake.

Someone should organize Tea Party Unity rallies – groups across America coming together showing solidarity in our shared mission to restore America.

Do not allow one group to hog the stage – each Tea Party group should be equally represented. Do not allow an ego driven long winded knucklehead speaker who is disrespectful of their allotted time assignment to hijack the rally. The rallies must be about serving the attendees and not about individual egos or agendas. We can no longer waste time, energy and resources on such selfish nonsense.

Every time the Obama media hears negative news and in-fighting in the Tea Party, they have an orgasm. Since our inception, Obama's media has tried to portray white Tea Party members as redneck racists against a black president and black members such as I as Uncle Tom sellouts.

Karl Rove recently revealed that the Tea Party is also in the cross-hairs of the GOP.

So brothers and sisters, it is our patriotic duty to be on our best behavior. Cease in-fighting and come together focused on achieving our divinely inspired common goal of restoring America back to the vision of our Founding Fathers and the Constitution.

If we, the Tea Party, do not save America, no one will. God Bless.