May 23, 2013
Patriots, I got this horrible feeling watching the MSM on the cable news TV shows playing down the Obama scandals. I thought, does Obama being liberal and "black" trump any and everything? Will the MSM continue to side with him no matter what? Will all of the lies, corruption, betrayals and probable criminal activity simply roll off the Obama Administration's back like water off a duck? Will Obama and company get away with it all?

Heaven forbid! Heck no! Not on our watch! 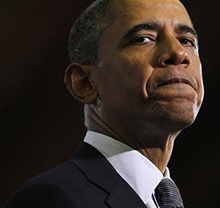 On the Fox News show, The Five, it was reported that some are calling the current Administration the most corrupt in U.S. History. Patriots, it is up to us to hold Obama and company's feet to the fire. I say "us" because the MSM have sacrificed objectivity and journalistic principles, burned them on the alter in worship of Obama; for the furtherance of their Socialist/Progressive agenda.

Obama is the Left's Platinum Credit Card, Black gold, the super trump card of their liberal dreams. A dark skinned socialist/progressive dictator – who would dare oppose him? Thus, the MSM will not allow Obama and company to fall.

The preservation and restoration of America and our God given freedom rest on our shoulders; patriots who love this country as founded. We can not allow these scandals to fade way. We must diligently continue pursuing the truth – alerting and informing the people.

The MSM continues to blow-off Benghazi. Obviously, the MSM believes Obama's black skin and liberal ideology trumps even National security. Obama and company must be held accountable for Benghazi.

Conservative Campaign Committee has exposed the Administration's lies, deceit and cover-ups in a powerful TV ad which I guarantee the Obama Administration does not want you to see.

Please spread it, share it with your low-info voter family and friends. Make it go viral. This is one of the most important TV ads CCC has ever produced. http://www.youtube.com/watch?v=DtZBC35gYCo

A brief encounter reenforced why pushing Benghazi and the other scandals is so important.

While filling my gas tank, a young man pulled his truck up to the opposite gas pump. When the young man opened his door, we realized that both of us were listening to Rush Limbaugh on our radios. We gave each other a high five. He said, "It's where I go to hear the truth!"

The young man said he tries to stay informed on the issues, but felt a bit overwhelmed with trying to keep his business afloat and family responsibilities. I encouraged him to hang in there. I told the young man that I am a member of the Tea Party fighting for him.

Brothers and sisters, we must do everything in our power to end the unprecedented tyranny of the out-of-control drunk-with-power Obama Administration. Benghazi along with the other scandals could be the key to rendering Obama impotent in the fulfillment of his oppressive agenda. Thus, the importance of pushing our Benghazi cover-up TV ad. http://www.youtube.com/watch?v=DtZBC35gYCo

My dad told me years ago that a snake can swim under water a long time just like a fish. But eventually it has to come up for air because it is not a fish. It is a snake.

For years Obama has gotten away with pretending to be a unifying moderate. Behind the scenes Obama has been coming up for air acting like the Chicago thug politician he truly is. Thank God these scandals (IRS, AP and Benghazi) are finally exposing the "real" Obama.