Lloyd Marcus
This black does not think Bundy is racist

April 27, 2014
Pick a card, any card. Racist. Sexist. Homophobic. We all knew it was only a matter of time before Democrats/Liberals played one or more of their Big Three Cards to silence, intimidate and crush opposition to their latest power grab/tyrannical attack on our freedom. 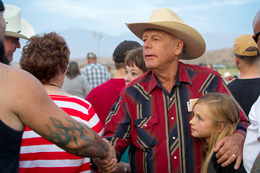 With a majority of Americans taking rancher Cliven Bundy's side against Obama's BLM thugs, Democrat Harry Reid concluded that it was time to play their old faithful, tried and true race card. As Gomer Pyle use to say, "Surprise. Surprise." We knew it was coming.

This is how the Left rolls. When America rallied around Duck Dynasty star Phil Robertson after being targeted for destruction by the Left, the Left played a twofer on Robertson; accusing him of being homophobic and racist.

Thank God it did not work. Coming to Robertson's defense, conservatives played their ultimate trump card which overruled all the Left's lies, distortions and evil intent. Our ultimate weapon is the Truth & Righteousness Card. I believe boldly and confidently standing up for truth and righteousness always defeats evil. And make no mistake about it, the Democrat, liberal, progressive and socialist agenda is evil.

The Left's vision for America is counter to the Will of God and the human spirit. Their anti-God agenda places man on the throne as the ultimate power, able to fix everything – the environment, income inequality, equal outcomes and everything under the sun via legislation. The Bible says, "The fool says in his heart that there is no God."

Not to wander too far off topic, back to the Left's nonsensical allegation that Bundy is a racist.

Any decent fair-minded human being would understand that Bundy was condemning the slavery of government dependency in his comments regarding Negros. The elderly gentleman is a rancher who is not media savvy, nor is he schooled in the nuances of political correctness. http://bit.ly/PABbJF

The Left are not decent human beings. Their bully minions went on high alert viciously in pursuit of a "gotcha" comment to squelch Bundy's proven leadership and ability to inspire millions to push back against the Obama regime.

Prominent conservatives running for the tall grass to get away from or running to microphones to denounce Bundy is testimony to their fear of the Left's high tech lynching machine. It truly sickens me.

I hate allowing jive turkey Leftist bullies to push us around. Rather than conservatives fighting back, far too many cower in fear and allow the Left to proclaim what is considered racist. It reminds me of the school yard when I was a kid. The only way to defeat bullies or at least gain their respect was to punch them in the face.

Before a Leftist's hack accuses me of advocating violence, I am talking about "politically" delivering a hard left hook to the Left's jaw by standing up for Bundy.

Mr. Bundy spoke the truth about cradle-to-grave government dependency wreaking havoc in the black community. We all know this. But any white person who dares to acknowledge the huge elephant in the black community's living room is vilified and branded a racist; Bill O'Reilly, Congressman Paul Ryan and now Cliven Bundy. Meanwhile, black families continue to suffer and vote monolithic for Democrats who vow to fix their problems, but never do.

Black relatives of mine (several died young) lived wasted lives because they were addicted to government dependency. They were Democrat party slaves, enslaved with chains far more powerful than steel; mental and emotional slavery. My relatives were robbed of the self-esteem, pride and joy of individual achievement and earning one's way.

Democrats and liberal media, I trump your race card against Bundy with my Truth and Righteousness card. You lose! Go peddle your despicable crap elsewhere.

I am a black conservative whose admiration and respect for Cliven Bundy remains unwavering. Mr. Bundy, myself along with millions of good decent Americans have your back. Hang in there, my patriot brother. God bless.