Lloyd Marcus
Enough! They MUST be stopped!

June 23, 2014
It has become a daily frightening occurrence, hearing politicians, commentators, pundits and stunned Americans say, "That's outrageous!" "He can't do that!" "No way!" "It's against federal law!" "They have no legal authority to force us to do that!" These comments are in response to the daily unprecedented out-of-control tyranny handed down by Obama and his operatives. We are talking arrogance with a capital "A" coming out of the Obama Administration. 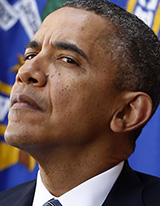 For example. The GOP was moving too slow in caving to Obama's amnesty scheme, so Obama said, screw it, I'll bypass everyone and make it happen. Obama sent a clarion call interpreted around the world to mean if you can get your kids to the U.S., the kids can stay. http://on.wsj.com/1iCADeR In essence, Obama has made illegal aliens winners of his Open Borders Lottery  free food, health care, legal assistance and education  winning more free goodies than are available to American kids. http://bit.ly/1ilYCEa Like a game show announcer, I expect an Administration official to enthusiastically say to illegals, "But wait, there's more....A NEW CARRRR!!!"

Around one thousand illegals arrive daily. Over 47 thousand have arrived thus far, an estimated 90 thousand to arrive by September 30th.http://bit.ly/1ilYCEa

Everyone and anyone (gang members, drug dealers and other criminals) are illegally moving to America greeted with open arms by the Obama Administration. Americans who are paying attention are well aware of the impending devastatingly negative impact Obama's "y'all come" policy will have on our structure as a nation, economy and national security.

Like every other extremely arrogant action by Obama, from blatantly lying about Obamacare to releasing the Taliban five  while everyone expresses disbelief, outrage and concern  nothing happens. The same is the case concerning the disaster happening at our border. Despite bipartisan outrage, the tsunami of illegals continues.

Then, there is the absurd lie from the IRS that Lerner's emails related to the targeting of Tea Party and conservative groups were lost due to a computer crash. http://bit.ly/1qnxpTV Does this Administration believe they can say and do anything they please and get away with it? The answer is yes. As I stated, the remarkable arrogance of this Administration is becoming legendary.

However, what I find most extraordinarily arrogant and insidious is this Administration's relentlessly focused efforts to mandate political correctness and implement their socialist/progressive agenda via government overreach. The feds have stepped in to try to force the Washington Redskins to change their name; talk about focusing on the minor while ignoring the major. http://politi.co/1ilTLmq

Think about that, folks. Iraq is falling apart. A gazillion illegals are invading our country. Terrorism is back on the rise. Food prices are through the roof. Forty-seven million Americans are on food stamps. Ninety million Americans are unemployed. Obamacare is a job killing and health care disaster. And what does the Obama Administration focus on: taking extraordinary measures to force the Redskins to change their name. Unbelievable.

My fellow Americans, when is enough enough from this horrifyingly deceitful, conniving, anti-American and evil bunch in DC who are holding our great nation hostage? The mainstream media will never place the best interest of America above Obama. The first black president is their best hope for ramming their dreamed socialist/progressive agenda down the throats of the American people. I get that.

It is becoming increasingly clear that the GOP, Democrats and the MSM are in solidarity with the concept of an ever-increasing big government America.

Obama and his operatives are so emboldened to lie and do whatever they please because there has been no major push back or effective effort to politically stop them.

Therefore, the last hope for America as founded is us: you, me, the Tea Party. We MUST vote out GOP traitors and Obama operatives and replace them with conservatives. Period!

And another thing – along with supporting conservatives such as Chris McDaniel in his June 24th runoff in Mississippi, we MUST continue rallying around, supporting and encouraging our handful of fighters in DC, Sen Ted Cruz, Sen Mike Lee, Congressman Trey Gowdy and others.

Mary and I are driving from Florida to Biloxi, Mississippi, to meet up with our Conservative Campaign Committee team. We will help push Chris McDaniel over the top. http://bit.ly/U0cPvJ

Folks, together, we can do this.